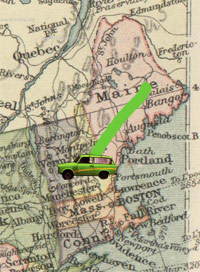 Mankind can never match the beauty of nature, but the woman made of tin is the closest thing to perfection since La Pieta. She captures the exquisite agony of a woman at her fleeting peak. Beauregard and Nils find her in the sitting room of her inventor, Donald Rickenbacker.

From arm's distance her brushed surface is flawless. No seam or rivet is visible, not even the subtle marks of the many hammer blows that pounded angled tin plates into gentle curves.

She is a few inches shorter than one would expect a woman to be, but considerably heavier owing to her tin construction. She has three gearings. The first gear permits her to sit and speak, the second to dance elegantly, and the third to sob gently (an unavoidable side effect of her gears) and perform a passion.

The woman made of tin does not know her name and cannot recognize any face. She is a mechanical logic machine with no storage capability. She exists in a solipsistic stupor, but the teeth of interlocking flywheels inside her torso force her to obey her creator.

Donald Rickenbacker instructs her to dance twice daily in the town square and answer any question posed her for hours at a time. In the evenings a lonely man may pay a nickel to perform a passion with her. Mr. Rickenbacker wraps her head in two towels to silence the sobbing sound of the gears turning. Then he permits the customer to spend up to ten minutes in the privacy of a closed room with the woman made of tin.

Beauregard refuses to be shut up in a room with her on account of her queer, unblinking button eyes. Nils is moved more by the sweep of her figure and gladly pays the fee. He emerges only a minute after the door has closed and insists they leave Mr. Rickenbacker's house immediately. It is only later, on the road to Vermont, Nils confesses the woman made of tin laughed when he took down his trousers. Beauregard comments that he hope the tin woman escapes and wreaks havoc on the community. 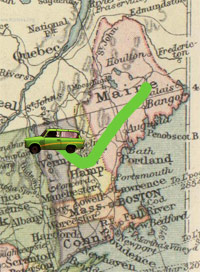 A detour from cheesery tours is forced by a malfunction in the Alpus. Something within the engine hisses ceaselessly and foul-smelling bubbles emerge from the single cabin vent. The indicator light on the dash begins to blink an ominous blue. Even with all windows down conditions inside the Alpus become intolerable. Fearful of being overcome by the vapor, Nils pulls the vehicle to the side of the motorway and opens the hood.

A Thuringian vacuum tube governing the Alpus's gyroscope needs recharging with noble gasses. Not just any service station offers Krypton, but Nils happened to see a portrait studio for humming birds and bees a mile or so past. The Krypton in their high-speed flash bulbs might be transferrable to the Alpus's vacuum tube.

While Nils walks back towards the studio, Beauregard advances into the unknown. He relies upon the kindness of a farmer who offers a pail of milk and a hank of dried pork. The man brags that he has a chicken capable of laying two eggs simultaneously. When he leads Beauregard to the darkened room where the chicken is kept the farmer embraces him suddenly and they hug in fearful silence for several minutes.

In reality, no such animal could ever exist. The farmer explains his ruse was necessary to avert suicide. Beauregard explains that most times you simply need to ask for a hug and one will be offered without deception. The farmer accepts this reality, though later Penelope would phone them in the car with news that the farmer has shot himself in his chicken barn. 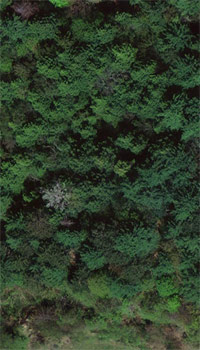 Nils is far more fortunate, finding both a cooperative photography studio glad to recharge the vacuum tube and a curiosity not to be missed by visitors to Appleway, Vermont.

While the studio is recharging the tube, Nils enters Alice Lantern's Pneumatic Oddity Emporium. A full dime buys him access to the horse show. Miss Lantern leads a blinkered quarter horse into an iron sphere. Nils is able to view the horse enclosed within the sphere through a very thick window.

The horse is sealed in the sphere and a terrific whirring sound begins as compressors begin to increase the atmospheric pressure. Nils believes the horse must be deaf to stand unmoving in the midst of such a din. After a few seconds the horse begins to visibly shrink. Faster and faster it diminishes in size until it is barely visible.

Alice Lantern explains: forty atmospheres to shrink the horse to the size of a pea. At that size its blood is like coal and its sinews are like corded steel. Alice then opens the chamber with a great gust of air and offers to Nils his dime back if he can hold the horse in his palm.

Nils struggles furiously to accomplish this task, cursing in his native tongue and straining until he is red in the face. Fearing for his safety, Alice bids Nils stop and explains that though the horse is no larger than a pea, it is actually the same weight as before. Nearly half a ton!

Nils laughs and steps back and in a moment the horse begins to resume its normal size. With a great gasp of breath it swells to the size of a pickle, then a dachshund, then a coyote, then a retriever, then a puma, a mule, and finally a horse. A black, oily liquid leaks from beneath the blinders, but the horse seems otherwise unharmed. Alice Lantern feeds it a gray carrot.

Nils purchases a pea-sized porcelain doll of the horse for Beauregard. He retrieves the vacuum tube and even receives a ride from the mayor of Appleway back to the Alpus. Nils finds Beauregard several miles down the road and red-faced from exertion. He offers him the porcelain horse, but Beauregard swats it down and it shatters on the gear shift. Nils laughs at the petulance, but inside he is furious. In a private moment he notes his anger in his journal, thereby purging himself of poisonous, murderous hatred.