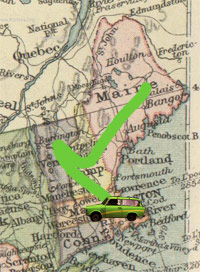 The meadows and famous canals of Massachusetts lead the travelers inexorably to Boston. In these troubled times the City of Beans is experiencing great unrest. Squadrons of motorcycle police patrol the streets in search of a serial murderist called The Lassoer. He creeps up behind couples, lassoes both, and tightens the rope until they burst down the middle.

Joblessness is also rampant. In the famous yard of Harvard University a pretty young girl has hanged herself from the novelty faucet of the Harvard Magic Faucet Fountain. Nils and Beauregard watch her lifeless body swaying back and forth, her hand passing into the flow of water and striking the transparent plastic support rod, thus completely ruining the illusion.

Nils and Beauregard sample bitter beers from City of Beans bars. Couples stand apart to avoid drawing the attention of The Lassoer. They dance like butterflies caught in separate jars.

Out on the street out-of-work mathematicians are busking with equations. One bearded scholar jots logarithmic equations on the sidewalk in chalk. Another has brought a blackboard and repeatedly solves Navier-Stokes. Nils tosses a nickel in the man's mortarboard and thinks he hears the distant laughter of the woman of tin.

Beauregard is tired and uses the car telephone to ask Penelope if they might stay the night in Boston at an inn. She does not answer. Nils believes this means they are to continue on through the night or sleep on the ground. Fearing the Lassoer, they continue on. 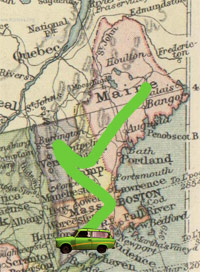 Crossing over the border into Connecticut they accidentally violate a rural curfew. They are stopped at a checkpoint by members of the Connecticut Gendarmerie. Nils suspects extortion, but Beauregard easily identifies the men by their beaded hauberks and the nine-pointed star of Connecticut.

Nils and Beauregard are menaced with musketoons unnecessarily and pulled from the Alpus by a man seemingly left behind by a receding glacier. The Gendarmes offer no explanation for their violence and force Nils and Beauregard to lay face down on the ground. Sodium lights are set up and the Gendarmes dance on the road, casting quivering shadows across the prostrate pair.

Reminded of his youth games at Wolverton Boys Academy, Beauregard begins to weep. Nils, made of Norwegian ice, simply endures the cruelty without voicing his outrage. True, he could crush the men to bleeding skeletons in his hands, but such a thing is not for a visitor to a foreign land.

Both men suffer the humiliation and are permitted back into their car. A fanny-faced Gendarme almost apologetically provides them with passage papers, though he suggests they seek the nearest motor lodge.

They share a room at the Affordolodge in Durning. Several black buses are staying the night as well. The next morning at the free continental breakfast Nils encounters the passengers.

There are three covens of suspected warlocks, watched over by bounty hunters in motorcycle helmets. The warlocks are dressed in pink footy jumpers sized for adult warlocks. Their heads are covered with burlap sacks and their hands fumble for the tongs at the waffle bar.

Nils takes a picture with the bounty hunters, but only because they seem to want to show off. They unshackle one of the warlocks and ask him to levitate a table. The man refuses repeatedly in the soft voice of a child on the ground that any sort of sorcery would incriminate him. The bounty hunter throws away the poor man's waffles and jelly, instructing him to eat the yogurt and like it.