Nine out of 10 Vampires Prefer AC Over DC

Fortunately lawmakers have decided to act, but it's too little, too late.

In California, lawmakers passed a proposal last year -- dubbed the Vampire Slayers Act -- to add vampire electronics labels to consumer products, detailing how much energy a charger, computer, DVD player, PlayStation, microwave or coffee maker uses when on, off or in standby mode. 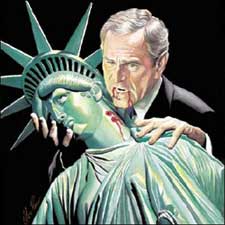 Heh, our government voting on vampire issues? Wouldn't they be a bit biased?No! This is not the solution! We don't need warning labels, we need wooden stakes and garlic, and DVD copies of all the seasons of Buffy to train new slayers. This is just a feel good law that accomplishes nothing.

The issue is particularly pressing in Ohio, the nation's No. 1 emitter of toxic air emissions -- mostly from electricity production at the state's coal-fired power plants. Walton said skyrocketing energy costs mean everyone should worry about the vampires in the house.

I think I speak for everybody when I say, "FUCK OHIO."

But this Walton, he gets it. There are vampires in our houses and if we don't do anything about it we will continue to pay out the nose for electricity we aren't using, electricity that is going to power overcrowded vampire schools and vampire nudist colonies. These dirty vampires should pay their fair share, not leech off God-fearing American working men!

Of course, what do the fat cats in Washington want us to do?

He advises shutting off the other vampires too, though the inconvenience of resetting the clocks, channels and timers on those devices each morning will discourage most people.

Instead of slaying the electric vampires, we should compromise? We should unplug our clocks every morning? We shouldn't leave our PlayStations plugged in for no reason despite the fact we haven't used them for eight years? What is this, a third-world country? I thought this was the United States of America, damnitt! We like our electronics plugged in for no reason, our vampires slayed, and our A.I. retarded. That's the American way!

If one in 10 American homes used only appliances endorsed through the program, the Energy Department estimates, it would reduce U.S. carbon emissions by the same amount as planting 1.7 million acres of trees.

Okay, enough vampire bullshit. I just love these wacky claims that promise incredible gains if only an infinitesimal amount of people stop doing something or do something less. They throw huge numbers in our faces that are actually quite small when you look at the big picture.

Holy crap, you mean if we just perform the incredibly annoying task of unplugging our clocks every day we wouldn't have to plant 1.7 million acres of trees? That's a lot of acreage when you consider the United States is only 2.3 billion acres large! If only those monsters used less energy...

Here are some more ways we can conserve our precious resources and make the world a better place. 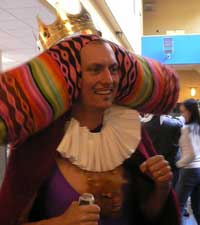 God I hate Halloween.If one in 10 Americans stopped bathing we would be able to conserve enough water to waterboard 6,000 terrorists a day, the Association of Stinky People for the Unethical Treatment of Prisoners of War estimates.

If one in 10 American households had watched Futurama it would be in its 8th season by now and suck more than The Simpsons currently does, according to a bunch of faggots.

If only one in 10 Americans stopped eating there would be enough food to feed 30,113,994 Americans.

If one out of 10 Goons stopped doing anything there would be enough resources in all the world to satisfy the unlimited wants and needs of the entire planet's population. Shame on you, goons.

$40 billion in energy costs is just the price we have to pay for progress, and it's a damn good deal if you ask me. Imagine a world where you have to plug everything in over and over again before using it. Imagine a world where you couldn't keep your Nintendo DS plugged in and charging even if it's already fully charged, just so you can be sure you've got enough juice to play Nintendogs during the four hours a day you spend in the bathroom.

If a blinking red light on my TV doesn't tell me that it's turned off, how will I know?

The only reason people should conserve energy is if they don't have enough money to pay for that energy, not because there isn't enough of it to go around. If there aren't enough resources to power our stupid crap, then the people in charge of energy just aren't doing their jobs. They shift to blame to the general populace and scold us for not conserving.

I can say with full confidence, despite not doing any research on the subject or even knowing what I am talking about, that there is enough energy out there to power every single electronic piece of shit we can dream of plugging in and there is no point in conserving energy.

It ain't our fault, it's the vampires.