How to Improve Your Worldwide Conspiracy: Chapter 1

Where: Two miles outside of King City, California. 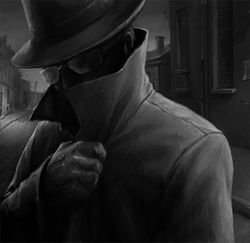 Junior Junior Agent Brad sat on a metal folding chair between a pile of lettuce and the roaring highway. He had been tasked with manipulating a nearly deserted produce stand. A shit detail. Small time stuff just to test him. But this is what it takes to become a high-ranking member of the Worldwide Conspiracy, so Brad would wait it out, slyly control whatever boring little corner of the world his bosses told him to control, and hope for his career to make the promised upswing.

Every once in awhile, he dragged his ass out of the chair and rewrote the sales figures while the owner was busy helping a customer. Brad would quietly break open the sturdy lockbox and add or subtract a few bills. Then he would trudge back to the chair and slowly count to a hundred before randomly changing everything again.

At least he had some competition to keep things interesting. A man from Conspiracy Global Inc. sat in a second metal folding chair on the other side of the produce stand. The man pretended to never notice Brad, but would occasionally slip into the stand and undo everything that had just been done, replacing the made-up numbers with other made-up numbers and then helping himself to a potato. He had taken a potato every time he got up. There was a large plastic bag of potatoes next to his chair by this time.

Brad was just about to take his turn at changing the increasingly confused owner's sales records when his phone loudly rang. Both the produce guy and Agent Potato looked over as he dug into his pocket and answered.

"Is this Junior Junior Agent Brad?" said a friendly voice that could best be described as mysterious, and not just because Brad didn't know who it was.

"How did you get this number?" said Junior Junior Agent Brad. "Who are you?"

"Who I am is not important."

The produce guy went back to double checking his sales notebook and swearing. Agent Potato had put on sunglasses, and now appeared to be staring straight ahead, ignoring him completely. Brad tried to talk quieter, but the passing cars made that difficult.

"What I want is not important. What's important is that what you want is to do everything I say, exactly when and how I say it. Or something might happen to Sarah, understand?" The voice had not changed tone or level of excitement for even a moment. It was as though the man on the phone thought he was asking the time and had simply gotten all the words wrong. 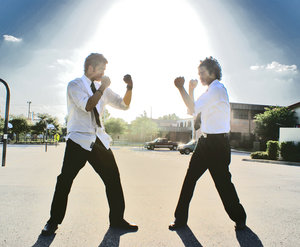 "Not Sarah!" said Brad. The other two looked over again. Agent Potato impressively managed to convey rolling his eyes without ever taking off his huge mirrored sun-glasses.

"Yes," said the voice, "I said Sarah. Now get in your car and drive down towards Las Vegas." The line was disconnected.

Brad sat frozen for a moment, his nondescript, black cellphone next to his ear, hanging like a question. Then it sank into his pocket and he got up casually, as though he were merely having another run at the produce stand. Instead he strolled over to his car. He was about to unlock it when he felt a sudden pressure. Agent Potato was holding a gun to his back.

"Why don't you tell me exactly what conspiracy information you were just given so I can take it from Worldwide Conspiracy Inc. and use it for Conspiracy Global Inc," said the guy.

"What kind of conspiracy is it if you announce what you plan to do? Especially before you do it?" Brad said. "But ok, I'll give you the information. Here it comes."

He spun around like a politician who has been threatened to change sides by a member of the conspiracy community, and jabbed his fist right at the Potato Guy's throat. The man started back reflexively, and, in the same moment, PULLED THE TRIGGER.