There seems to have been a mixup with the State Og burglar alarm units which shipped last week. Instead of signalling to let homeowners know when a burglar was coming, they signalled to let burglars know that homeowners were asleep. Our scientists guess you should try putting the batteries in backwards, and if that doesn't work you might want to invest in earplugs or a new house. Special thanks this week go to: Tom "Smoking Dragon" Clancy, Matt "Coco13" Rock, Don "Motorcycle" Jolly, and Chris “Bimston” Robison.

Attend Our Charity Art Auction At The Children's Hospital!!

As part of the settlement for the class action lawsuit against ourchildren's toys division we will be hosting a charity art auction for the Children's hospital this Sunday! The auction will be co-sponsored by Camel cigarettes and we will be auctioning off two originals from the world-renowned Smoking Dragon art series. 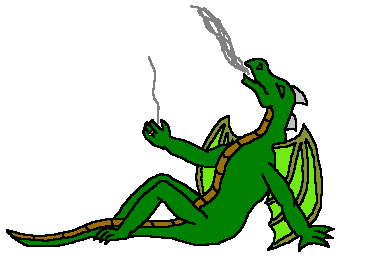 The first piece, entitled Noon in the Garden of Earthly Delights depicts man's struggle internal struggle with himself and society. 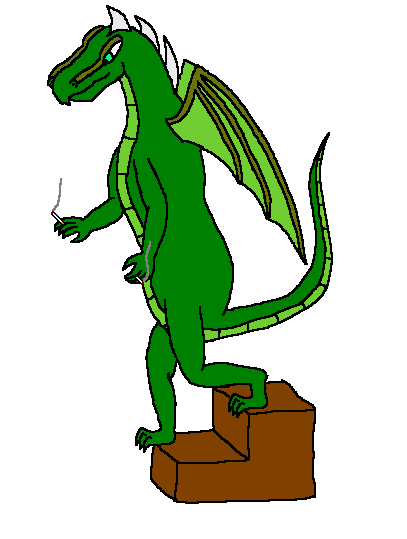 The graphic anti-war piece Explosion at the Shingle Factory will hit the block next.

Prints of these works of art can be found in art galleries and cigarettes ads all over the world, this is a unique chance to own a part of history and help sick kids!

After the auction a cigar/cigarette bar will be set up in the intensive care unit where comedian John "Wacky Guy" McKeenzie will entertain you with five hours of racially offensive jokes.

There's a $100 or 50 Camel dollars charge to attend with all proceeds going to the Children's hospital except for the money we decide to keep and spend on booze for ourselves. The first 50 people to attend will receive a grab bag full of various items we pull from the containers marked "biohazard!"

To attend send an email to State Og Representative.

Ditch That Zero And Get With A Nero

Love: You're not getting some without help, that's for sure. All the best mates have already been either impregnated with seed superior than yours, or have secured a mate who makes more money than you and your 9 to 5 job converting old recyclables into new food. What's a single axe-wielding librarian to do in this day and age?

With State Og's latest personal agency, you're not specified to this day and age any more. "Ditch That Zero And Get With A Nero" allows men, women, and Gentle Ben to pick and court in any time period they wish, as long as it's not one run by bedroom furniture. The very qualities which make you far too resistible to others today were actually fawned over in previous eras. Pretty crazy species, huh?

Take our first subject, Gregory Hamill, who wishes to remain anonymous in his home at 312 W. Chesterfield Boulevard. Greg is fat, nearsighted, and perspires constantly with the slightest manual labor. Ladies will scream and run from him like he's a big tub of fattening fatty fat, which he really is. But put him in the early 1800's, and suddenly Sir Gregory Hamillton is the toast of the town. His generous belly shows his wealth and status, as does his monocle. This allows him to take huge loans from banks and never pay them back. All thanks to his deep, belly-shattering laugh. Women who believe intercourse is strictly for married people who don't need to take off all their clothes fawn over him.

Not fat? Doubtful, but we still can fit any lonely person into any time period. Have problems even just talking to women? Come to ancient Rome, where young boys do just the same tasks, but with more binging and purging sprees. Feel women can't appreciate your outdoors abilities? Prehistoria will show off your finely honed sabre toothed tiger-killing skills, while you transport things using square wheels. Are you an intelligent, shy woman who can't seem to get the attention of a man, let alone the attraction of one? Come to Salem in 1692, where you will be found to be a witch and burned to the stake.

State Og "Ditch That Zero And Get With A Nero": Now you'll have something to say when Sally snaps "My man done conquered the Byzantine Empire."

The management regrets to inform you that during a routine human resources check-up, the following person or persons were

We know you were very close to them, and apologize for the mix up. We were under the mistaken impression that they were

and acted with the distinctive quickness and accuracy that makes State OG human resources the most well known human resources department among nameless things that dwell invisibly below rotten cities of the dead.

We have complied two fruit baskets to ease your suffering, one of which contains traditional fruits and candies, and one composed of any remains we could salvage from the hot zone. While the former features a sparkling honeydew, the latter has a 30% chance of containing several keepsakes or items of sentimental importance to you. Come to the human resources department quickly, because if your choice is not made in the next 45 minutes, both baskets will be destroyed.

In the interest of fairness, you will be expected to work overtime throughout this tragedy.

The liberty or “suicide” bomber is one of the most dangerous professions known to man, exceeded only by the professional murder victim and semiotics professor in lethality. Most of the suicide bomber’s workplace casualties could be avoided with a few simple safety precautions. Sadly, our list of precautions was destroyed in the tragic papaya accident of ‘95, but we’ve reconstructed this list from a mistranslation of ancient Mayan prayers.

1) Choose your bomb – the first-time suicide bomber death rate is well over 90% because novice bombers want to dive right in with the big explosives. Start with two or three sticks of dynamite (leave plastique and HMX to the experts) and work your way up from there until you reach your comfort level. The best way to determine your starting comfort level is to place a test charge underneath a mattress and detonate it while you lay on top. If you are propelled more than six feet in the air, the detonation may cause serious injury when worn in a bomb vest.

2) Keep it simple – every bomber wants to gussy up their bombs with shrapnel – nails, glass, stinging insects, etc. – but few of them know how to properly align shrapnel bits. If you aren’t sure what this entails, then keep your bomb limited to explosive, casing, and detonator. Otherwise, follow the diagram below.

3) Practice makes perfect – when you detonate your liberty bomb, a thousand things will be going through your mind. If you let anxiety and distraction diminish your attention, the detonation will turn your insides into an Atkins-friendly puree. Practice by detonating at least three smaller charges before setting off the big one in public. Start with a quarter charge and work your way up to at least three quarters of the final charge.

4) Wappet flange – the most crucial step to keeping yourself alive through a “suicide” bombing is to properly calibrate your wappet flange. Make sure the troubadour striae are vented clockwise toward the tesselar grabble. Do not let the flange bump out of alignment with the swinge.

Follow these steps and your martyr’s death rate will plummet from 99+% to 3.7% (per man-hour blast +/- 96.3%). Of course, we don’t condone the killing of innocent people no matter how safely you detonate your liberty bomb, so make sure your victims are infidels, or at least overweight.