Speaking of lasagna, Mr. Davis emailed to let me know every single thing wrong with my review, including the fact that it wasn't even a review:

Editors? Publishers? Discredits? John, I think you have Something Awful mistaken for some other website where the writers "care" about "anything." We don't. Lowtax pays us in Confederate militaria and we have to fight with him to be allowed to write anything other than Dharma & Greg reboot spec scripts.

How did the whistling enhance or detract from the settings and action?

It should be self-evident, but the next time your mom is pulling a train in the men's room at the Cat Hatch I'll kick the DJ off the Lords of Acid and start whistling Sittin' On the Dock of the Bay into the PA system. Derail the whole thing, and I hope you know her Fat Mom in Heat DVDs put the jorts on your trotters. 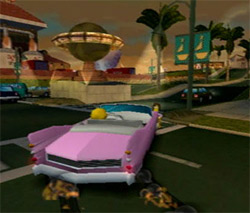 Lisa stops for a little paid entertainment from Mrs. Krabappel in The Simpsons Hit & Run.How could a choice to betray Madsen's [sic] wedding vows have given the game greater depth?

How was the plot cliched or hackneyed?

P.S. Wikipedia isn't a reliable source for academic research, which you would know if you weren't the sort of insufferable, sexless, autistic manchild who replies to articles point-by-point in a vain effort to fill your otherwise barren life with some human meaning.

A quick note to all of you out there who "get" Truth Media: don't send us email pretending (poorly) not to "get" it and doing Jeff K. shtick. It's embarrassing for everyone involved and dishonors Jeff, may he rest in peace.

Truth Media seeks to lure out the brainless zealots mindlessly spewing words about faceless companies and products they have no relation to. Why do folks get so worked up over such inconsequential things? Truth Media is here, not to discover the answer to this, but just to make fun of them.