What if Borderlands was actually a subscription-free MMO, with a unique vertical progression system and absolutely zero terrible meme-based humor? That's pretty much what Defiance is. Well, sort of. 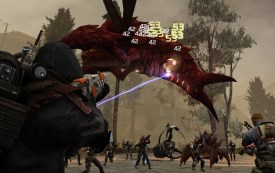 Defiance is a sci-fi third person RPG shooter with big insects and grubby clothes and ATVs that can be summoned at any time out of thin air, as God intended. The difficulty isn't determined by your stats and character level as much as the behavior and variety of your enemies, which become more engaging as you progress.

Did I mention this is a tie-in game (or "transmedia event" if you're insufferable) which is based on a SyFy Channel show that hasn't even aired yet? This game is the weirdest thing.

Like Guild Wars 2, you buy the game then play as much or as little as you like without any subscription fees. Unlike Guild Wars 2, Defiance was created by a studio that can make significant improvements to their games on a regular basis.

The game is a bit rough around the edges, to be sure, but it's hard to ignore Defiance's charms. It could be something special as long as Trion Worlds puts in half as much work as they did with Rift. If the first patch is any indication, the game is on the right track.

Sang-Froid: Tales Of Werewolves
Orcs Must Die with lumberjacks and werewolves and survival, or Jet Set Radio without rollerblades, or okay I was lying about that last part. 7/10

Evoland
It's that game that lets you play through the history of action RPGs, and it is so confident in the cleverness of its concept that it dispassionately does exactly what you'd imagine. 4/10

Army Of Two: The Devil's Cartel
This game stars two men named Alpha and Bravo, and they have guns that they shoot at a lot of other men. 3/10

Guacamelee
A Metroid-style game that's far too good for the dumb internet references that you should ignore. 8/10

Pokemon Mystery Dungeon: Gates To Infinity
If this barely interactive mess gets to be called a roguelike, Yoda Stories must be rolling in its grave. 4/10