Shocking Exposé: Quadrilateral Cowboy Is NOT A Realistic Hacking Simulation

Look, Quadrilateral Cowboy is fantastic. It's stylish, challenging, charming, and at least two or three other positive adjectives. I enjoyed every minute. But I can't believe all the big shot video game reviewers failed to mention how inaccurate the game is. What are these people even getting paid for?

In Quadrilateral Cowboy: My body is a box. 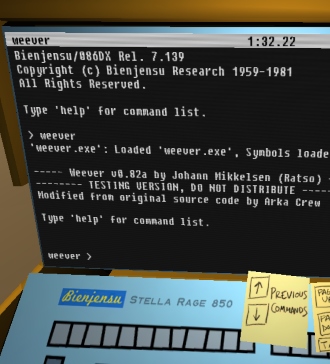 In reality: My body is a roughly human-shaped source of shame.

In Quadrilateral Cowboy: I am able to do hacking with computers.

In reality: I can't find Hacking.exe on my PC. Seriously, I looked everywhere. I even checked the button next to "Show hidden files".

In Quadrilateral Cowboy: It's a trippy alternate version of the 1980s with hoverbikes and cats working the cash registers at local shops.

In reality: It's the post-apocalypse.

Using A Computer To Solve Problems

In Quadrilateral Cowboy: I can pretty much do anything. Bypass locked doors, disable security cameras, pull off amazing heists, make a little robot do jumps. It's great.

In reality: The computer gives me horrible news every day. Just the most miserable news possible. I try to escape in computer games, only to realize life has passed me by.

In Quadrilateral Cowboy: I hang out with cool friends all the time. They read interesting books.

In reality: I have driven away all who I once held dear.

In Quadrilateral Cowboy: On multiple occasions I step away from the computer and go outside.

In reality: Does that virtual reality sightseeing part of Valve's Lab thing count?

In Quadrilateral Cowboy: I'm able to nimbly climb up onto ledges that are higher than my knees.

In reality: As long as the top of an elevated surface is at or below my chest I am able to sort of fall forward and wiggle around until I'm on it, crying the entire time.

Quadrilateral Cowboy
Every bit as fun to play as it is to say the game's name out loud, which I go out of my way to do, often. 9/10

Abzu
The most fun I've had with virtual fish since the time I was pretty sure that I had played Seaman but then thought about it and realized I was mistaken. 8/10

I Am Setsuna
I Am Generally Impressed But Also Wondering If The Devs Just Got Carried Away When They Found Out There Was A Sale On Snow Textures Or What. 7/10

Ghostbusters
This game ruined my childhood, which began the moment I started playing and ended when I stopped. 1/10

The Technomancer
Picture the music video for Michael Jackson's Bad, but on Mars, in a basement. 7/10

Monster Hunter Generations
I resent these quality titles for occasionally making me search for the above 3DS image tag that I haven't used in months. 8/10