When I'm stressed I take a bath, lie down, maybe read a book or something. These people break out the Exacto knife. What a subculture to belong to.

I would bet a million dollars that the people he is complaining about have never once interacted with or bothered him. That's on page 47 of the emo handbook titled "Creating Problems That Aren't There".

Everything is better in co-op mode. 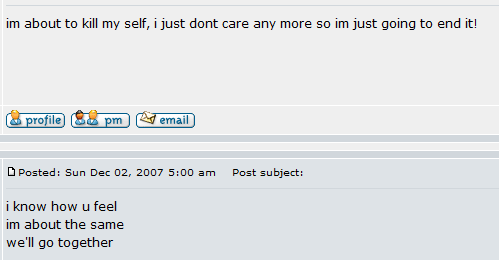 You can have an emo boyfriend as long as the other guy kissing his neck 24 hours a day doesn't bother you.

Everybody watches Stand and Deliver and thinks that calculus is incredibly difficult and that it was such an achievement for those poor high school kids. Then you get to calculus and you wonder why the fuck everybody was sucking those barrio kids' dicks for passing a test.

My parent is a beekeeper :)