Dragon's Transformation Stories, submitted by Unwanted Google Image Search Result. When I was a wee lad no more than the size of a hairless Ewok, I was fascinated with the wonderful world of Transformers, robots in disguise. Who isn't keen on things that start out as one thing and then, through what can only be described as magic, become something else? That said, who doesn't love stories where people get turned into furry animals and then raped? Okay, so maybe I overstepped my bounds by a little there.

Dragon, the mentally crippled curator of this sacred hall of retardation, crafts many a story involving transformations of the furry kind. Like like this take on the classic Alice in Wonderland:

"What are you talking about?" Alice turned her head to look at him and saw his penis

slipping out of it's sheath. "Oh my God!" She tried to get up to scramble away, but he was on top of her.

During the last change, when her hips re-formed and her butt as humans know it had disappeared, they had moved up under her tail. "It's been so long," the hare said rubbing her genitals.

"And I see the excitement in your eyes and feel it on your pussy."

Despite her revulsion, Alice was becoming wet under the ministrations of the hare. Sweat and pre-cum matted and slicked her fur and made the touch of the hare's paw even more stimulating. She tried to get away, but her legs, already tremendously awkward, were spread and pressed flat against the floor under the weight of the hare.

After reading that, I think I would like Dragon to transform into a corpse, so that we may bury him deep in a garbage dump. If rabbits aren't your fancy, you can read exciting tales of women turning into velociraptors, turtles, two-headed snakes, and more. There is even an exciting story about a man becoming a car. Wowie-zowie!

Being that this is a sort of furry site, don't forget to check out some of the crappy art. Honestly, if I drew crap like this guy draws, I'd be embarrassed to even know I drew crap like this guy draws. How he overcomes the overpowering personal shame he deserves to feel to post this crap on the Internet I'll never know. In addition to his art, he is kind enough to host art from some of his friends, like young Kurt. 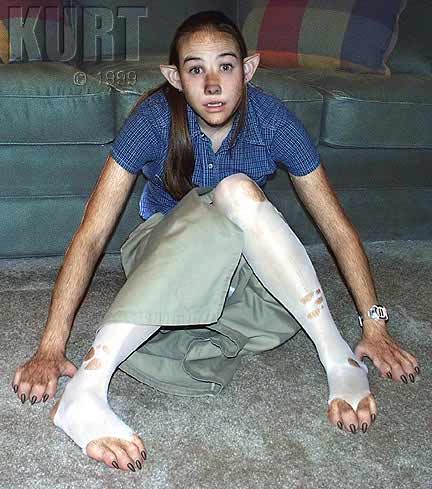 Time to go wash my brain out with carbolic acid.