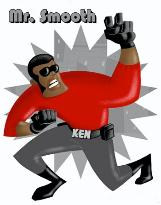 In high school I was at a friend's pool party and we had been swimming for a few hours. It was getting dark and so people were filtering into the house but I was still out in the pool with a few people, I was sitting on the steps in the shallow end hanging out when this girl that I had a huge crush on jumped into the pool in her jeans and came over and sat on my lap. She proceeded to put her arms around me and strike up a conversation while everybody else left us alone. What do I do when my dream comes true? I say "Man I bet you're pretty cold and uncomfortable sitting like that, maybe you should go dry off"

Then I go ahead and regret my idiocy for 6 years.

Way back when I was a senior in high school circa 1996 my friend had a get together at his house. So this girl that I had been crushing on and I start talking and pretty much end up making out on the couch for a couple hours. So our friends decide to go hop in their cars and grab some food, which leaves just the two of us there.

So we kiss some more, and she tells me her parents are out of town for the weekend. Me being totally inexperienced didn't think much of it. So then she says "which means you don't have to take me home tonight".

To which I reply:

"So do you want to sleep on the couch or the floor?".

Way back in the summer after junior year of high school I was chatting up this girl while on this trip to Tanglewood during a summer program. We were getting along pretty well for the entire trip until the bus ride home, when the girl mentions liking Jane Austen. For some strange reason I instead though of Denise Austen and said "That's the exercise lady, isn't it?"

Yeah, pretty much fucked that up.

A number of years back my girlfriend and I moved from California to Wisconsin (I'm back in CA now). We had a small going-away party, and a few of our friends brought small token gifts.

My friend Paul has not always been blessed with an overabundance of tact. He decided to be artsy though, and gave us a rose made of black lace he bought from a gas station. He specifically handed it to my girl.

Paul was the only person in the room who didn't realize those lace-roses from gas stations are actually thong panties folded into the shape of rose.

Here's a really embarrassing story, every word of which I SWEAR TO GOD is true. I can't even say this happened in high school. I was 28 years old, and about to have sex with my new girlfriend. It must have been one of the first dozen or so times with her, max. I had just removed her bra, a pale blue number with graphics of cartoon bumblebees on the straps. You guessed it -- I put the cups of her brassiere over my eyes and said "I'm a bumblebee!"

I did not have sex that night.

I'm banging this chick in my parents' house, being really drunk and wasted. Everything is going smoothly until I feel something moving inside me and I acknowledge the fact I've crossed over to the 'uncontrollable-vomit-zone'. Being a gentleman, I promptly help the girl over the finish line with my now semi-limp penis and immediately retract it with an audible *BLOP*, spurting towards bathroom while she is still in the middle of the O.

I freaking EXPLODE, spraying my sweet digestive juice all over the room like Mr. Creosote. So, while I'm trying to clean the mess up, the girl I just made love with knocks and enters. I'm on my knees, sweaty, half covered with bodily fluids, giving her the classic 'deer-in-the-headlights' look. "Not smooth, not smooth at all" I think while vomit is slowly dripping from the corner of my mouth. I try to say something comforting, but the sounds coming out of me are unearthly.

I've never seen someone enter and exit a room as fast. Yet, as we all know, it is no use as the image is already burned into her brain...FOREVER!