EXPECTATIONS: Does anyone remember liking Adam Sandler? Honestly, I know there was a point sometime in my youth when I might have said "Alright, a new Adam Sandler film!" but I also know that point could not possibly be any later than 1998. Given that Sandler's movies have done so poorly lately that people are now theorizing they might be intentionally bad Producers-esque scams, one has to wonder: Why does this man keep getting work?

REALITY: In a shocking twist that should surprise no one, there are literally no redeeming values to this film. It's a mess of offensive, unfunny material that takes us deep into the mind of an entertainer who hates himself and his audience and shows us absolutely nothing of interest. Wait, I lied. It's somewhat interesting to see a film whose best quality is the inclusion of Vanilla Ice. That should be enough to make you stay away right there. 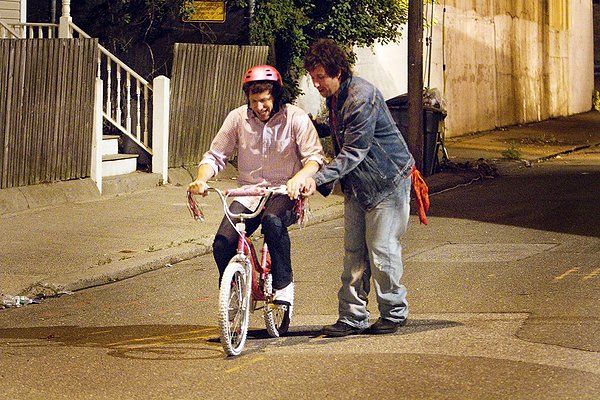 Sandler plays Donny Berger, a man who became famous as a junior high student for having an affair with his teacher and getting her pregnant. Sure, this constitutes statutory rape in pretty much every definition of the term, but it's okay because the teacher was a hot chick. Now an adult, Donny is hurting for money and facing jail time when he discovers that his long-estranged son Todd (Andy Samberg) has made a lot of money in hedge funds and is about to get married. Donny crashes the festivities and soon discovers that everyone loves him and thinks he's the coolest guy ever, despite the fact that the film's entire point hinges on his being a loser. I think Adam Sandler must have some massive insecurities, because with the exception of his "Not really an Adam Sandler movie" movies, he refuses to make himself look anything other than totally awesome. Anyway, events play out like they do in these movies, and Donny makes up for the years of abusive and unfit parenting by teaching Todd to party. Whoo-hoo.

Adam Sandler's schtick has been wearing thin for years, but now that the man is pushing 50, it's just become pathetic. As a result, everything about That's My Boy just seems so mean-spirited and hateful. For example, when the men of the movie go out for Todd's bachelor party, they go to a spa for a "men's care" package. Sure, why not, this seems like something rich people do. Everyone is having a good time, they're enjoying themselves, except that it's not butt-rock enough for Donny's liking, and he throws a fit like a petulant child. As a result of this juvenile behavior, Donny gets to have sex with the spa owner and he gets to drag everyone out to party his way.

The whole movie is pretty much like that. The most spiteful part of the film is the portrayal of Todd's fiancee Jamie (played by Leighton "Why Did My Parents Name Me This?" Meester). Because Jamie DOESN'T like the loud-mouthed crude jackass who has forced his way uninvited into her wedding party, naturally she must turn out to be a ball-busting control freak who has sex with her brother. Oh, did I not mention that? Yeah, this happens. The big twist is that Jamie is having an affair with her brother. This is a movie that basically revolves around a rape victim who became a child abuser, so why not? Because it's completely unnecessary and unfunny, that's why not. 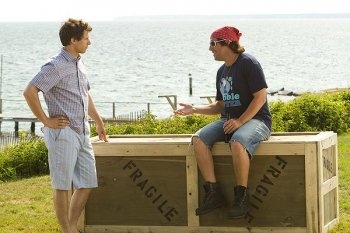 Fragile. Just like the careers of self-obsessed comedy actors.Possibly the most pathetic thing about this film is that it's clearly aware of its issues, but it's too cowardly to address them. Donny is obviously an alcoholic, to the point where he keeps a beer on his person at all times. Rather than confront this, even in a Pineapple Express-style way by having Donny say "I sure drink a lot," the film rewards him by granting him Popeye-esque superpowers whenever he drinks. Now, this could have been funny, and it has been in other films, but Donny is such a pitiful case that it's actually just sad.

Even though his sexual abuse is obviously the cause of Donny's inability to mature, when a character actually tells him that he was molested as a child, he just brushes it off with a "No, we had a real connection!" which is a concept the film is committed to. When we meet Donny's teacher in the present day (played by Susan Sarandon, who seems to have forgotten that she is an actual actress), it still plays that their love is pure, despite the scene being set in a women's prison. Imagine for one minute that the genders in this film were reversed, and it revolved around a 25-year old male teacher seducing a thirteen-year old girl. That's a movie that would never see the light of day, or at the very least would never be treated as a comedy. Although if they could get a cameo by Chris Hansen, that would be pretty funny.

The worst thing about this phase of Adam Sandler's career is that he's fully aware of what he's doing. Just watch the first half of Funny People if you don't believe me. Sandler has genuine talent, he just steadfastly refuses to use it. Either he's incredibly lazy, or he might have the lowest self-esteem of any man in Hollywood. Let's explore the latter for a minute. Let's say that Sandler really does hate himself, and he thinks he can't do anything other than "Adam Sandler Films." That puts the disdain in this film in perspective.

At one point, Sandler looks directly at the camera, sadness and bitterness in his eyes, and flips off the audience. To this I respond: No. Fuck you, Sandler. You don't get to pull this self-aware "You made me this way, shame on you for seeing this" bullshit that people used to justify Jack And Jill. No one asked you to make this movie, and judging by the box office, no one's buying it. You own the production company, you made these decisions, you have no one to blame but yourself. No one needs to see this film. If I wanted to read statutory rape fantasies and poorly written testimonials from self-loathing misogynists, I'd stay home and log on to Reddit.

MINORITY REPORT: I have to wonder who came up with the gag about the New Kids on the Block tattoo. That's a joke that actually gets funnier and more disturbing the more you think about it, and I'll bet Sandler kicked that guy out of the Writer's Room the very next day. - Joseph "Jay Dub" Wade