EXPECTATIONS: Okay, what am I seeing this week? Oh, Hysteria? That sounds interesting, what's it... it's about what? *chuckle* Okay, okay, that's cool. *snort* Ha ha, I can do... Pffffft, excuse me. I'm going to hahaha...I'll be profession....hee hehehe. No, this is a serious subject.

HAHAHAHAHHAHAHAHHOLYCRAP. I HAVE NEVER BEEN SO HAPPY TO LOSE A GAME OF BRITISH TIME! 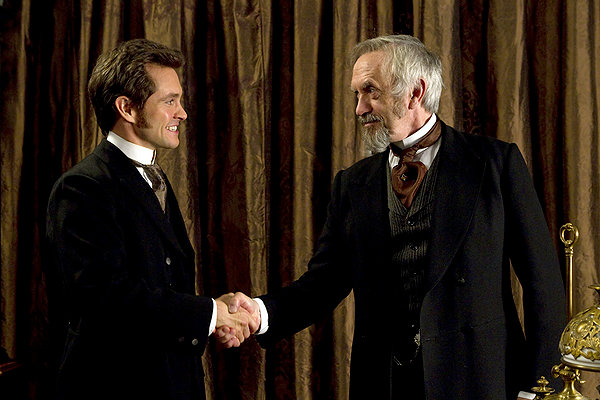 Do you know where that guy's hand has been?

In a week where we're praising The Great Emancipator doing an impression of Blade, I'm going to continue the trend of high-fiving films for embracing the silliness of their subject matter. This is a film that starts off with the words "This film is based on true events. Really." That's the joke I make, and they're starting the movie off making it for me! What a wonderful way to say "Hey, everyone, this is a movie about hoo-hahs!"

And what a movie about berjingos it is. Hysteria, named for the diagnosis formerly given to women by doctors who didn't understand how their patients' fluffernutters worked, ironically revolves mostly around a man. Dr. Mortimer Granville (Hugh Dancy) is an 1880s doctor who finds himself out of a job for preaching the insane theory that maybe people wouldn't die so often if doctors washed their hands on occasion. Desperate for work, he takes an apprenticeship with aging Dr. Robert Dalrymple (Jonathan Pryce), who is the leading specialist in women's medicine. This basically means that he takes any problem a woman has, be it sadness, boredom, tendencies towards arson, whatever, and labels it "hysteria." The cure for hysteria of course, is a good long two-finger massage to the cootie cavern. 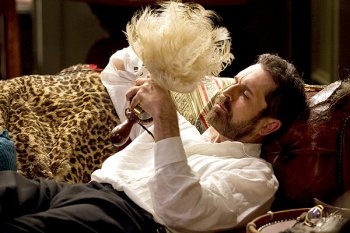 What ho, Rupert! Pip pip! Yorkshire puddings!I was inaccurate when I assumed this was a British film. It's actually kind of a "What Americans think British people are like" movie, which makes it even funnier. Everett in particular comes across as some sort of British Swedish Chef, delivering each line in a scene-stealing foppish "Oh, yes, indeed. Huffleruffle fanny woppit." On more than one occasion, two characters who are supposed to be romantically involved sit around having a conversation about how British they are. I'm not criticizing the film for this, I'm just saying it's something that happens. This level of silliness only adds to the charm of this film. In this regard, it shines a light on the ridiculous notion of Victorian Propriety, which is what caused the lack of understanding which brought about the "Hysteria" diagnosis. The film is almost like a parody of the ideals we think of in Victorian period pieces, making it essentially Pride and Prejudice and Peach Pouches.

All of this makes the film an excellent example of an essential film-watching concept that the Internet seems to intentionally fail to grasp: Films do not exist in a vacuum, and neither do audiences. What I mean by this is that when films are made, they do not only consist of the words in the script, they take influence from the world around them, and you take influences from the world in with you every time you watch one. If you haven't been paying attention, women's rights have been kind of a big deal lately, as well they should. The only way this film could be more blatant with its message is if at one point Maggie Gyllenhaal looked at the camera and said "It sure is BARBARIC what we think of WOMEN'S HEALTH in the 1800s!" followed by Hugh Dancy saying "Yes, it would be outright RIDICULOUS if we were STILL HAVING THESE ISSUES in, say, 2012!" and Rupert Everett chiming in with "Tiddle WADDLE mash and BANGERS!"

Yes, the film is quite heavy-handed with its message, but it's a good message and it's one that people need to hear. The point of this movie isn't just that if people were less uptight about women's happy scabbards, we would never have needed the diagnosis of hysteria in the first place. (As an example, Dr. Dalrymple uses this diagnosis to cover both symptoms of frigidity AND nymphomania.) The real point is that if we didn't STILL live in a world where confused old men try to tell women what to do with their Winnebagos despite not even being okay with hearing the WORD Winnebago, we would have no need for this movie.

Hysteria is a strong, solid film. There are some flaws, like how Dr. Granville is a progressive man of science one minute, then suddenly refuses to believe the revolutionary concept of female orgasms the next. However, the film coasts on its charm and humor, which is good enough to make it one of the most enjoyable movie-going experiences of the year. The most important point to make here is that Hysteria is flat-out hilarious. (I would say "hysterical," but that would make me Peter Travers.) Seriously, go see it. Bring a date. You can show how enlightened and understanding you are, which will only help you in your quest to touch her... winklywallet. Okay, I'm officially out of made-up synonyms.