Seeking a Friend for the End of the World

EXPECTATIONS: The trailer for Seeking a Friend for the End of the World owes a huge debt to Eternal Sunshine of the Spotless Mind, my favoritest film in the whole entire world: Scenes of a thirty-something everyman (Steve Carell/Jim Carrey) and a manic pixie dream girl (Keira Knightley/Kate Winslet) defining a relationship amidst a backdrop of surreal anarchy (guy in a gas mask lifting weights/a bed on the shores of a wintry beach), all set to an impossibly catchy left-field pop-rock confection ("Road to Nowhere"/"Mr. Blue Sky"). And let's not forget the overlong title that doesn't quite roll off your tongue. Imitation is the sincerest form of flattery, and if Seeking a Friend is half as good as Eternal Sunshine, it'll be among the best films of 2012 - a perfect blockbuster to underscore our upcoming tangle with the Mayan apocalypse. 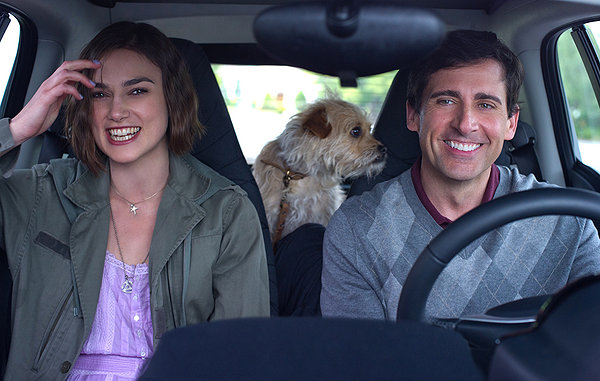 Ahahahahaha! Oh, how charming our impending demise has become.

REALITY: Seeking a Friend is quite amazing when it's simultaneously hitting the expected beats and skipping others entirely. Even though one can guess broad strokes of the narrative from the trailer, Carell and Knightley have such chemistry, and the filmmakers have such an eye for unexpected detail, that the little things can blindside the viewer.


Seeking a Friend cold-opens on a scene from the trailer: Dodge (Carell) and Linda (Nancy Carell) sit on the shoulder of a country highway as the radio-man informs them of the impending apocalypse. Without saying a word, Linda exits the car and wanders into the forest. Their marriage is over, and Dodge has to find a way to kill his last three weeks on Earth. Enter Penny (Knightley), a quirky hypersomniac pothead with a penchant for casual sex - just the kinda gal who's impulsive enough to goad Dodge into reuniting with "the one who got away."

"They all got away," Dodge says, "but she was the first."

That's the impetus for the meat of Seeking a Friend, which earns zero points for originality as it piggybacks on a whole host of genres - romcom, disaster flick, road-trip film - to achieve something like greatness. Seeking a Friend does this by evolving from its farcical first reel (which, incidentally, relies way more on gallows humor than you might expect, based on the marketing) to a poignant final act while working hard to avoid clichés. As such, it almost functions as a commentary on its forebears, with a surprising amount of hard-drug humor propelling the comedy and characters who possess an exceedingly rare superpower: the ability to separate sex from love.

Even at its most absurd, Seeking a Friend remains grounded by solid actors and a screenplay that knows the importance of three-dimensional characters. Comedians Rob Corddry and Patton Oswalt make glorified cameos in an early, rather shocking, sequence that's funny precisely because Corddry and Oswalt know how to make characters whole. And because their characters are plausible, they can sell their actions and dialogue, no matter how outrageous.


Seeking a Friend goes through a marked shift in tone once Dodge and Penny near the end of their journey (that the journey itself only takes them from New York to Delaware over the course of several days is a subtle indicator of Seeking a Friend's distaste for its lineage) and becomes somewhat less predictable. A film like Seeking a Friend can end only one of two ways, but I grew less assured of my prediction - that, after widespread mayhem, the asteroid would miss Earth entirely and the characters would face the consequences, in a bitterly ironic twist on the genre - as the film wore on.

To be fair, Seeking a Friend has some pacing issues and a repetition compulsion (two distinct musical interludes, during which classic-rock gems underscore Dodge's contemplation of the oncoming apocalypse, are spaced only minutes apart), but at 101 minutes, it's not exactly an endurance test. Rather, it's an imperfect, kinda-profound movie that spends more time developing characters than most of the competition in the season or the genre.

MINORITY REPORT: I think if the world were ending and I were next to Keira Knightley, I'd make sure to yell "I LOVE YOU NATALIE PORTMAN!" just so those were the last words she ever heard. - Martin R. "Vargo" Schneider