EXPECTATIONS: This is the wrong trailer. In fact, there are so many movies from 2011-2012 (at least six) titled The Pact or The P.A.C.T., I'm not even sure what I'm about to watch, let alone what to expect.

REALITY: OK, so it's this The Pact and, if you seek any surprises, avoid the trailer. Avoid it at all costs. I haven't seen a trailer so eager to synopsize the entire plot since Warrior, the marketing for which rendered the film rather redundant.

On an aesthetic level, The Pact is a horror film about choosing the wrong wallpaper. While the plot, as it were, follows Annie (Caily Lotz) as she investigates the disappearance of her drug-addicted sister (Agnes Bruckner) from their family home, The Pact gets most of its mileage from the horrendous wallpaper lining the hallway. There are some interesting narrative twists in the third act, but twists alone cannot sustain a movie; rather, the set direction and cinematography are the main reasons to recommend The Pact. God knows it isn't the acting. 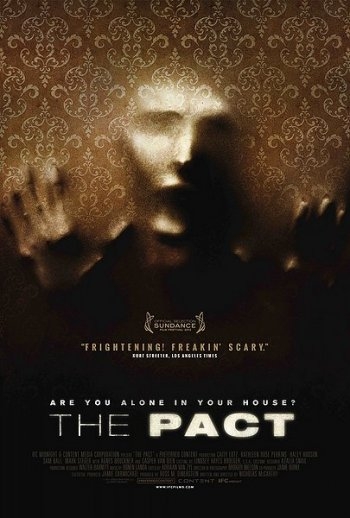 Wow, you weren't kidding. That is some hideous wallpaper.Lotz, Bruckner and CASPER VAN DIEN!!! don't interact so much as read cue cards from just off screen through much of The Pact, which is strange because Bruckner is the lone bright spot in quite a few bad movies and VAN DIEN!!! rocked Starship Troopers. Even stranger: Bruckner and VAN DIEN!!!, as relatively experienced thespians, are terrible in their brief roles while Lotz, whose acting career amounts to Bring It On: All or Nothing and a few episodes of Mad Men, is at least halfway tolerable.

Acting is a crucial element to film (obviously) and, as a diehard horror fan, I'm immune to mediocre acting. However, downright awful acting is the quickest way to pull me out of a movie. As a film, then, The Pact is pretty bad. As a series of decent scares and mounting tension held together by the weakest of connective tissue, The Pact is pretty OK.

Writer/director Nicholas McCarthy shows a lot of promise, aided by cinematographer Bridger Nielson and production designer Walter Barnett. When the camera tracks down the hallway, characters framed between symmetrical shots of that gaudy wallpaper, one can almost feel echoes of Kubrick. And when Annie draws a DIY Ouija board on a hardwood floor and uses a cross as a planchette to communicate with those in the great beyond, everything - the art design, the lo-fi effects and, oh hell, the acting - comes together to create a pretty enthralling sequence.


The Pact relies heavily on jump scares and audio shocks, but McCarthy also bothers to create tension and a rather fascinating plot, dense with ghosts and secrets and implied child abuse in this unremarkable family home, even if it's a little rough around the edges.

Is that enough reason to recommend a movie? Considering the hell I've given Hollywood comedies as of late, I must admit a weakness for horror and directors who show promise. Bad acting aside, the effort McCarthy put into The Pact is commendable.

I'd rather watch a thousand low-budget pet projects - the "interesting failures" of the world - than 1000 Words. Or Gone. Or What to Expect When You're Expecting. Or any number of soulless husks passing as films, because even with their access to jaw-dropping budgets and whole armies of screenwriters willing to do hack work, the filmmakers responsible for those abominations can craft whole movies without a moment as interesting - as enlivening - as a substantial chunk of The Pact, warts and all.

(Note: This is one of the few times I've watched a theatrical movie via VOD, and I'm digging this distribution model more and more, especially when it concerns films unlikely to hit the multiplex. Horror movies work with a large crowd joining in the experience, but they work equally well on a laptop and headphones ... late at night ... in the dark. Because you never know what might be creeping up behind you.)

MINORITY REPORT: The TV adverts for this film that we've been seeing over here are the most amazingly innocuous attempts at marketing a horror movie. Picture the scene: a Ouija board on a basement floor with a crucifix on it, a disembodied voice-over asks "ARE YOU SAFE IN YOUR HOUSE?" the crucifix swings over to "yes". Glad we cleared that one up. - Ian "Professor Clumsy" Maddison