EXPECTATIONS: This is a fictional adaptation of a self-help book written by Steve "Family Feud" Harvey. (Not surprisingly, Harvey also executive-produced Think Like a Man.) Considering I missed He's Just Not That Into You, I don't know what to expect from Think Like a Man, but I don't expect much.

REALITY: Halfway through Think Like a Man, I gave up on connecting with any of the male characters in its sizable ensemble cast, each of whom is required to shed his humanity to fit an archetype from Harvey's book: Zeke, the Player (Romany Malco); Dominic, the Dreamer (Michael Ealy); Jeremy, the Non-Committer (Jerry Ferrara); and Michael, the Mama's Boy (Terrence Jenkins). Recently divorced Cedric (Kevin Hart) and happily married Bennett (Gary Owen) are on hand to act as comic relief whenever the men meet, sitcom-style, in a bar or on the basketball court to discuss their dating woes. 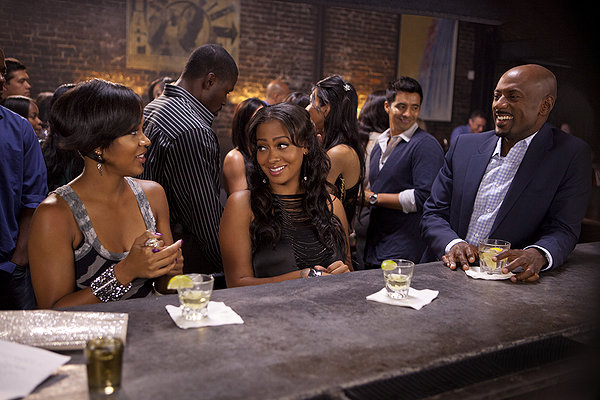 The women fare worse, required to act as foils to assigned male archetypes: promiscuous Mya (Meagan Good) vs. The Player, single mom Candace (Regina Hall) vs. The Mama's Boy; successful businesswoman Lauren (Taraji P. Henson) vs. The Dreamer; and Kristen (Gabrielle Union) vs. the Non-Committer who hasn't popped the question after nine years of dating. If this all sounds very confusing, the film handles it better than any synopsis could, but the women are reduced to shrewish nags who begin every sentence with "Steve says..." as if a man dumb enough to maintain a mustache like Harvey's through two failed marriages is a qualified expert on relationship advice.

The four women get their desperate paws on Harvey's book, which supposedly blows the lid off of the secret lives, thoughts and tactics of men, and use that knowledge to advance burgeoning or stagnant relationships. For example, Mya follows Harvey's "90-day rule" and withholds sex from Zeke, without telling him she's following such a rule, of course. In the process, Mya forms her own extra-secret rule, deciding to relent and fuck Zeke if he says those three magic words: "I'll rape you." (Or maybe it was "I love you." Yeah, that's it.) This subplot alone illustrates the three major flaws for which Think Like a Man can't account:

1) The whole film is a $13 million infomercial for an already best-selling book that doesn't reveal anything women shouldn't already know. When the female characters aren't summarizing passages from the book, Harvey pops up diegetically on a talk show to convey the rest. Eventually, the talk-show angle is dropped and Harvey addresses us directly through a TV, which is never explained and doesn't justify a film like this exceeding a two-hour running time.

2) Hinging sex on an "I love you" has dangerous consequences: It plays into the damaging myth that men enjoy sex more than women, and the guy might say it, as Zeke does, out of sheer desperation. But, hey, what woman wouldn't want an empty declaration of love before giving up, as it's referred to time and time again throughout Think Like a Man, The Cookie?

3) I hate to harp on Harvey's qualifications some more, but based on how the narrative progresses, Harvey's dishing out some bad advice in his books. His advice engenders 90 percent of the dysfunction and conflict between the characters. The couples find happiness only when they eschew the "love is war and war has rules" shtick and COMMUNICATE. Hell, Bennett stays happy throughout Think Like a Man, and for all we know, his off-screen wife never touches Harvey's book. This is a strange development for a film designed to bolster an advice book's sales, and a damning rebuttal to anyone dumb enough to spend $8.39 on a book full of obvious truths and dubious rules. 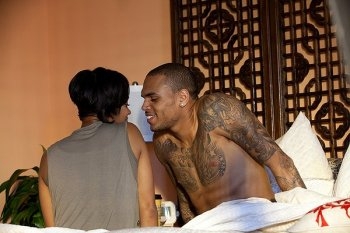 Oh shit, look out!Despite my seething hatred for Harvey and the commercial feel of this bullshit movie, Think Like a Man is not a total waste of time. Malco, Hart and Owen -- especially Hart, who steals the show despite limited screen time -- work against their inherent limitations, peppering an overlong film with a surprising number of laughs. Think Like a Man peaks when the men (four of whom are black and two of whom are white) poke fun at racial stereotypes, achieves an amiable hum whenever men and women interact, and bottoms out whenever it deigns to follow the one-dimensional female characters. For a film that's supposed to hold the key to successful relationships, Think Like a Man only skims the surface, proving that Harvey doesn't know men very well and doesn't know women at all.

Single mothers may feel as if they're limited to seeking surrogate fathers, female executives may have trouble finding men who aren't intimidated by their success, sexually adventurous women may have trouble securing a man who stays after a one-night stand and ambitious girlfriends may feel stifled by nerdy manchildren, but Think Like a Man, the book it rode in on and the entire "PG-13 romcom" genre feel less like solutions than symptoms of a society that's built around glass ceilings, slut-shaming, gender-typing and reductive thinking.

Candace (who's frequently referred to as a baby mama) never reveals who her baby daddy is, why they split up or why he seems to have no interest in his son. My guess is, newbie screenwriters Keith Merryman and David A. Newman were too afraid to color outside the lines, too afraid to expand the screenplay beyond the limiting scope of Harvey's tunnel vision, and too afraid to explore anything with delicacy or humanity. So we're left instead with the remainder, a baby mama whose sole purpose is finding a father for her precocious son, a problem to which the filmmakers find a Freudian solution in Michael, who's so in love with his own single mother ... well, you get where I'm going with this.

Fitting then, that Think Like a Man's biggest faults stem from the male filmmakers' inability to think like a woman -- long enough, anyway, to explore the interior lives of female characters who should be more interesting than the male archetypes imported from Harvey's book. Unfortunately, this kind of irony is less ha-ha funny than it is ultimately depressing, no matter how many Kevin Harts or oddball cameos the film throws at us.

(A special note, just for cinematographer Larry Blanford: The more of these films I see, the more I realize how little the cinematographer gets to do on a PG-13 romantic comedy. When approaching a job like this, do you sign a contract waiving artistic integrity and promising that your camera will call as little attention to itself as possible?)

MINORITY REPORT: I can't wait for the internet parody. "Think Like a Brony" is going to set the internet on fire (and then hopefully burn it down). - Joseph "Jay Dub" Wade