The Book of Eli

Robert "Macrame_God" Seeders wanders across the ashen wasteland of cinema, ignoring this week's other movies -- stay on the path -- and braving hordes of marauding post-apocalyptic jerks to review The Book of Eli.

The Book of Eli is not actually a book, it's a movie.

EXPECTATIONS: All I know about The Book of Eli is what I've seen from the trailer that preceded Ninja Assassin. Apparently Denzel Washington roams the war-scorched roads of the dystopian future in a quest to protect a legendary book of tremendous importance. Fifty bucks says it's The Da Vinci Code.

REALITY: I can imagine the discussion between the two studio executives who conceived this movie.

"Hey bud, did you finish The Road?" 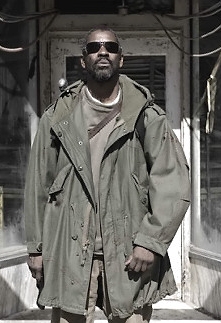 There's no shortage of cool shades in the future.

"Yeah, it's pretty good, but there's something that bothered me about it. There wasn't enough action."

"Oh yeah, I agree. There should have been a sequence where the father fought a bunch of cannibalistic hicks with a machete."

"True. Also, I don't like this whole plot about a father and his son desperately trying to maintain their hope and dignity amidst all this terrifying carnage. It's too... humanistic."

"Yeah. They should have taken that out, put in a plot about him escorting a "book of incredible importance," which is clearly a... y'know."

"Mm-hm. We should also make obvious hints that it's a y'know so when we do reveal what it is, the audience will feel smart for figuring it out."

"Also, we should have the story play second to the action and shoehorn the whole religious message into the film at the last minute."

"I dunno. That sounds rather sanctimonious."

"Whoa, whoa! Sancti-what? That's a pretty big word for someone who works in the film industry!"

The Book of Eli mashes together scraps from Mad Max, A Boy and His Dog and the Fallout series. There's not much here that's fresh, and the few new wrinkles failed to impress me, but it's pretty entertaining despite being unoriginal.

Denzel Washington's character, a noble yet deadly scavenger named "Eli" (we get a glimpse at his "Hi, my name is" name tag), roams the wastelands of the war-torn future in order to deliver "a book of tremendous importance" to ...someone. Alas, the journey west is fraught with hazards such as bandits, cannibals and Gary Oldman.

Oldman plays Carnegie, the leader of a small but reasonably thriving town situated in the middle of nowhere. Carnegie has sent his band of thugs on a fruitless quest for the same "book of tremendous importance" that he, like Eli, never addresses by its title. Here's a hint, guy, if you actually told your henchmen what it was, then maybe you'd get some better results. You can't even go to Borders and demand the "book of tremendous importance," they're gonna need at least a synopsis. When he learns that Eli possesses a copy, possibly the last in the world, of this "book of tremendous importance," Carnegie orders his cohorts to relieve him of it by any means necessary (preferably violently). Carnegie must get his hands on that book, because he's convinced that if he does, he will have the power to command all the remaining people in the world. I think he might be confusing it with the Necronomicon. 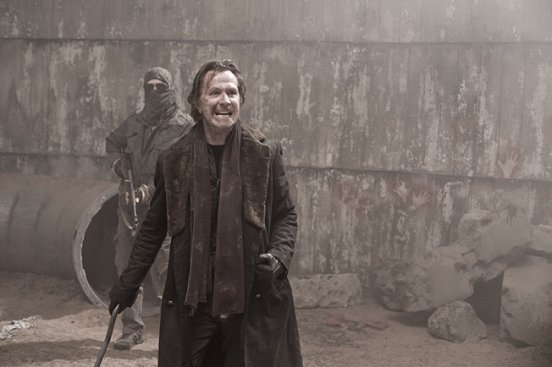 There was a lot of scenery here earlier, but Gary's been chewing again.

At this point, I was almost expecting a story of the Left Behind variety from The Book of Eli, but while the film's final act does get hijacked by a religious subplot, it never felt like it was a "religious" movie per se. Make no mistake, The Book of Eli is a post-apocalyptic action/adventure movie. Washington makes for a great badass with a heart of gold, and Oldman, well, he was born to play cartoonishly over-the-top villains. Here, he chews the scenery so hard I'm fairly certain that you can see his teeth marks on the actual print. Of particular interest here is Ray Stevenson as Redridge, Carnegie's right-hand man. Redridge is the kind of character that, in a typical genre film, would just be a mute tough-guy henchman, but Stevenson gives him hints of depth. Michael Gambon and Frances de la Tour also steal scenes, while Malcolm McDowell and Tom Waits make delightful cameos. And Mila "Meg Griffin" Kunis stands out, mostly because she plays the rare character that doesn't seem to have just crawled out of a septic tank.

Credit also goes to the director team, the Hughes Brothers, who also brought us the brilliant Menace II Society. The destitute world they have created is very impressive looking, and they're fairly generous with the action sequences as well. Eli might be on a pious quest, but that doesn't mean he can't butcher a few baddies along the way. It is the post-apocalypse after all: A man's gotta keep both his wits and his machete sharp.

The first two fight scenes didn't feel all that inspired, though. They were fun to watch, but I couldn't help but notice they had the same setup: Ugly punk approaches Eli, talks shit, gets fucked up, Eli then gets surrounded by his boys in a semi-circle (the second fight goes the extra mile by making it a full circle) and then they jump him. However, there is a great shootout sequence in the latter half of the picture that was cleverly filmed in a way that gives the appearance it was all done in one take. Notice I said "gives the appearance": It's pretty obvious there was a lot of CGI added later.

As we approach the climax, the action exits stage right, and what we have left is the movie slowly moving into what feels more like a drawn-out epilogue, with Eli struggling -- fight-free -- to finish his pilgrimage west. The conflict between him and Carnagie becomes more like a lightweight battle of wits. C'mon guys, throw me a bone! Give me a dune buggy chase out in the desert or a sword fight or something. You can't keep feeding me action sequence after action sequence and cop out during the climax. What's worse is that The Book of Eli doesn't seem like it even cares all that much about its religious undertones. There's a lot of talk about faith, but in the end it doesn't seem to have much bearing on the story. Eli's Book only serves as an excuse to get him from point A to point B.

If you're looking for spirituality, you're better off just going to church this Sunday. At least they won't charge admission.

MINORITY REPORT: I can't imagine a movie coming out this year that's gonna top The Book of Eli for sheer awesomisity. So Denzel Washington goes up to this dude and the dude like touches him and Denzel is all like "Yo, you put your hand on me again and I'll chop it off with a machete" but then the dude does it again and so Denzel totally chops his hand off with a machete! Religion is sweet! -David "Data Core Devil" del Vacote III