Daybreakers Fills the Vampire Movie Quota for This Month

EXPECTATIONS: You know what I'm not at all sick of yet? Vampire movies. I'm telling ya, vampires are gonna be THE cultural touchstone of the 2010s. Zombies are totally played out at this point, and aliens are so two-thousand-and-late. Superhero films are great and all, except I hate those lame super-powered jackasses. Let's take films like Blade: Trinity and get rid of a few key elements. Chief among them: Blade. That should be pretty sweet, right?

REALITY: Well, it is and it ain't.

Before I pounce on this movie for being utterly retarded, I must say this: Any movie that treats vampires like bloodthirsty monsters instead of unattainable tortured souls or whatever the hell deserves some credit. Daybreakers follows traditional vampire logic -- no reflections, no shadows, no sparkling. If only the movie surrounding these vampires had been handled as carefully.

In the ultra-distant future of 2019, vampires have taken over the world and enslaved humans in order to harvest their blood. If I were some kind of an idiot, I'd say this was a commentary on the dairy industry. Because I'm not, and it isn't, let's continue. With fewer humans in the world, blood is becoming something of a luxury, and if a vampire goes more than a few days without feeding, it starts turning into a freakish winged monster. Let me repeat that: The longer a vampire goes without feeding, the more vampiric it becomes. I still haven't decided if this is ironic or just goddamn stupid. Anyway, the president of BloodCo (Sam Neill) orders his head scientist (Ethan Hawke) to engineer a blood substitute before the entire planet goes all...um...bloodthirsty, I guess?

Beyond that, there's something about Ethan Hawke searching for a cure for vampirism because he hates being a pasty, boring night-owl. Also, Willem Dafoe shows up to give him the cure, and that's where things just get silly. 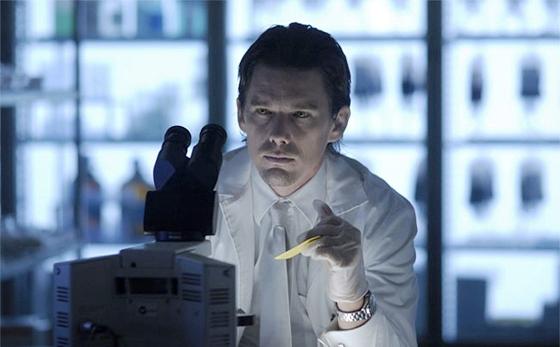 Ethan squirrels away in his lab, desperately seeking the perfect formula to keep his suit whiter-than-white.

Now just so we're clear: The corporations are struggling to end the world's dietary crisis, which is causing hungry vampires to suffer from debilitating health problems. Are these vampires supposed to be a metaphor for diabetics? I mean, I think it's obvious that the movie's making some kind of statement about how drug companies string along their infected customers for bigger profits, but isn't there a more appropriate metaphor for diabetics than goddamn vampires? Is that on purpose? I'd like to think it is.

And the cure? Well, I won't go into that. Some of you might actually want to see this movie.

...Fuck it. Remember that movie Outbreak? Remember how the cure for the Motaba virus was (spoiler alert) orange juice? The climactic scene in that movie was a gigantic "DUR" moment, and Dustin Hoffman all but facepalmed himself for not having figured it out earlier. Well, the Daybreakers cure for vampirism is every bit as simplistic, and it's completely ridiculous to think that it took ten years for someone to stumble across it. 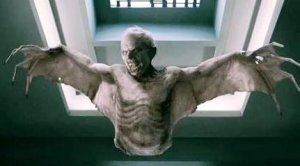 Raar! I'm a special effect! And I'm hungry!If this were just a movie about vampire scientists doing vampire science, that would have made for decent viewing. A little short on the action, sure, but still probably pretty interesting. However, the German-Australian Spierig brothers apparently thought that would have been too think-y, so they added some vampire-centric action beats to pad out the boring plot stuff. We get a few scenes of the Vampire Gestapo rounding up humans and shooting diabetes monsters, a car chase in which a Humvee with no windows chases a Cadillac with no windows, and bloodletting aplenty. After a while, the movie stops thinking altogether and starts offing characters left and right.

The second half of Daybreakers feels more like a zombie film than a vampire film, which isn't surprising considering the Spierigs' previous movie (Undead) was all about zombies. Hopefully their next film, an adaptation of Captain Blood, will also degenerate into flesh-eating nonsense (oh God, please let this happen...)

Daybreakers is the kind of movie that the less critical among us will eat up. Its central conceit is smart enough, and it plays with vampire conventions better than most. If the filmmakers had spent more time figuring out what to do with such an interesting idea, the end result might have been one of the best vampire films in years. As it is, though, Daybreakers is half a movie, with the final 40 pages of the script replaced with the words "Ethan Hawke bleeds."

MINORITY REPORT: Something about Daybreakers really moved me. All my life I've felt like I was different. I've always liked my steaks rare (medium-rare anyway, with more of a leaning toward medium), and I've never fit in anywhere... I think I may be a vampire at heart. Oh, if only a deep, brooding Ethan Hawke would turn me so that I could know the true power of eternal youth. -- David "Data Core Devil" del Vacote III