Dark Skies; A Glimpse Inside the Mind of Charles Swan III

A Glimpse Inside the Mind of Charles Swan III

EXPECTATIONS: Remember back when the public implosion of Charlie Sheen was everyone's favorite story? Those of us who love a good trainwreck held our breaths for whatever Mr. Tiger Blood would do next. Then Comedy Central spent an evening singing his praises, he traded one crappy sitcom for another and seemed to disappear completely. Now there's this... Roman Coppola writes and directs Charlie Sheen in what looks to be one part Being John Malkovich, one part Buckaroo Banzai, and one part alcohol-infused bile. Stir, pour over ice, dump on the floor. Winning! 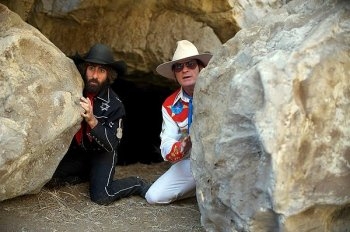 REALITY: It's difficult to say exactly what this film's purpose is. On one level, Coppola is exploring the nuances of Charlie Sheen's recent burnout by casting Sheen as a fictional character that might as well be himself. On another level, one can't escape the feeling that Coppola and Sheen thought it would be a really cool idea to try and remake 8 ½ in the most juvenile comic-book style imaginable. Neither of these schemes work particularly well, but A Glimpse Inside the Mind of Charles Swan III is kind of a fascinating little character study in spite of itself.

After the latest in a long, long line of bitter break-ups, Hollywood graphic designer Charles Swan III (Sheen) goes on a brief bender that ends with him crashing his car into a swimming pool and then promptly having a heart attack. Swan wakes up in the hospital, where his sister (Patricia Arquette), his manager (Bill Murray), and his latest client, a stand-up comic named Kirby Star (Jason Schwartzman), all ask him to reassess his life and start thinking of others for once. Swan agrees until he decides a better idea would be to stalk his ex-girlfriend (Katheryn Winnick) in the hopes of catching her with her new beau.

The film's title is fairly apt, as the above plot is frequently interrupted by flashbacks and dream sequences depicting Swan's grossly inflated ego and its effect on the women in his life. After he crashes his car, Swan imagines his funeral attended exclusively by his ex-girlfriends, no doubt ripped straight out of Two and a Half Men's sorry excuse for a farewell scene. This time though, he leaps forth from his grave and kicks off an elaborate song-and-dance number, suggesting that A) Swan still has plenty of life left in him, B) all he really wants is one last dance with his girl, and C) Charlie Sheen is probably still pretty bitter over Two and a Half Men spitting on his corpse.

While fun to watch, most of these interludes are maddeningly childish. In fairly short order, we get a dance sequence, a western vignette, a spy thriller, and a cheaply animated mental analysis. They do little to endear us to Charles Swan III, but they at least make the film easier to handle. If we were trapped in stark reality of the '70s with Swan, we'd probably wind up just as depressed and bitter as he is. Coppola knows this, which is why he seems hell bent on upping the ante on each dream sequence, until the end of the film, when he seems to have completely run out of ideas. 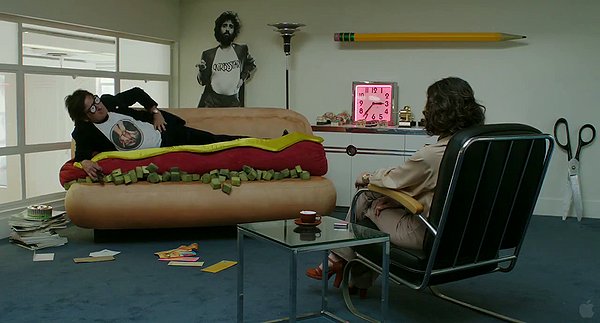 
They aren't all winners, either; most of these fantasies only confirm what an unabashed womanizer Swan is. The worst of these comes as Swan tries to imagine Kirby's latest comedy routine: a scene in which the two are spied on by the Secret Society of Ball Busters, a clandestine network of women that busts men for cheating. Mary Elizabeth Winstead plays a recurring role in these sequences as a woman constantly trying to murder Swan. In this scene, she orders a missile strike on his table outside a coffee shop. The sheer audacity of this sequence nearly puts it over the top, but it can't escape the fact that what these two men are imagining is a problem they themselves have created.

These indulgent sequences makes this already-short film go by in a flash. Charles Swan is clearly an imbalanced character, and every time we emerge from one of these fantastical interludes, we see a little bit more of the man beneath the delusion. The man who fancies himself a hero and a cowboy is reduced to arguing with his housemaid in Spanish and buying black-market caviar out of the trunk of a taxi cab. It's a sobering depiction, if not a humanizing one.

Perhaps Charles Swan III's biggest problem is that it's a few days late and several dollars short. It makes sense to want to capture Charlie Sheen's newfound insanity onscreen, but two years after Sheen imploded in front of the world, the time for that film has long since passed. The film's limited theatrical release means that by the time many of you catch up with it on DVD or streaming, Charlie Sheen's 2011 shenanigans will be a distant memory. We'll only have this to remember it all by, and as time capsules go this is a fairly inscrutable one.

Ultimately, I couldn't tell you whether Charles Swan III redeems himself. The ending that Coppola writes seems to offer a lesson for everyone but the character that deserves to learn it. Maybe it's because Charlie Sheen slips so effortlessly into the role. He plays Swan as a person completely at home with being a perennial womanizer and all-around sleazeball. If he learned nothing during the film's 86-minute runtime, I could believe that. The film seems pretty okay with that reality as well.

MINORITY REPORT: I hope they do a series of similar films. I can't wait for An Insight Into the Ego of Mel Goldstein or The Religious Teaching of Tom Kraus. - Ian "Professor Clumsy" Maddison