Drive; Straw Dogs; I Don't Know How She Does It; Tinker Tailor Soldier Spy; Red State

EXPECTATIONS: It can be said that the advertising campaigns for most movies are more concerned with putting butts in seats than giving the viewer a sense of what they're going to see. I understand this; that's why we have movie critics. But the ads for this remake of Sam Peckinpah's 1971 film are so completely misaligned with the film's concepts, it almost has to be a joke. This is a film that has held for years as a critical analysis of violence, and an attempt to understand the human capacity for violent behavior. What does the trailer for this version tell us? "Check this out! There's some sick shit going on here!" Given that only about a third of the people I've talked to even realize this is a remake, I'm expecting a lot of angry rednecks at my screening.

REALITY: Many times when a film is remade, the first question film fans ask themselves is "Why?" It's a fair enough question, I have trouble believing that in the past few years anyone has said "You know what I'd like to see redone? That Dustin Hoffman movie with all the rape!" But apparently someone did say that, and now this remake is left with the challenge of justifying its own existence. It does so amicably by moving the setting somewhere a little closer to home for American audiences -- from a quiet English village to the backwoods of the Deep South. 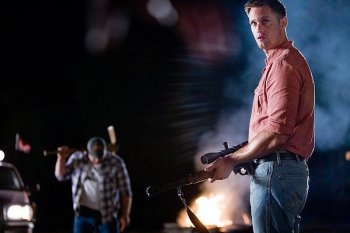 Spot the Ball: Round 2Following the same basic story as the original, the film starts with meek Hollywood writer David Sumner (James Marsden, who should just spend the rest of his career reprising Dustin Hoffman roles) and his wife Amy (Kate Bosworth) returning to her hometown of Blackwater, Mississipi to fix up her father's dilapidated farmhouse. David hires a roofing crew headed by Amy's ex-boyfriend Charlie (Alexander Skarsgard), and tensions rise from there. The crew begins to sexually harass Amy; David is tormented for his intellectualism; an animal dies; and then of course, there's a brutal double rape. Combine that with an accidental homicide from the town's only (legally) retarded person (think Of Mice and Men, except a bunch of rednecks try to kill Lenny before George can), and we wind up at the showdown where David reaches his limit. And that's what most people know of this movie.

Because this is a character-driven drama and not an action movie, there's a great deal of buildup to the final confrontation that makes the brutality of the whole thing seem, well, worth it, for lack of a better term. Charlie and his crew put a great deal of strain on David, who never even learns what they did to his wife, so it's satisfying to see him start to dole out punishment. But in a film that's actually meant to be a deconstruction of violence, is that the reaction we're meant to have? Obviously, we get a quick visceral thrill out of watching violence on the screen, but when the film takes the time to survey the wreckage, most people will start to feel guilty for taking such pleasure in the brutality. We have here a violent film that is a study of violence that makes you feel bad for enjoying the violence. This all may be true, but it's still cool when he dumps hot oil on that guy! (That guy, by the way, is James Woods, who decided to remind us all that he occasionally takes roles outside of playing himself in Family Guy.) 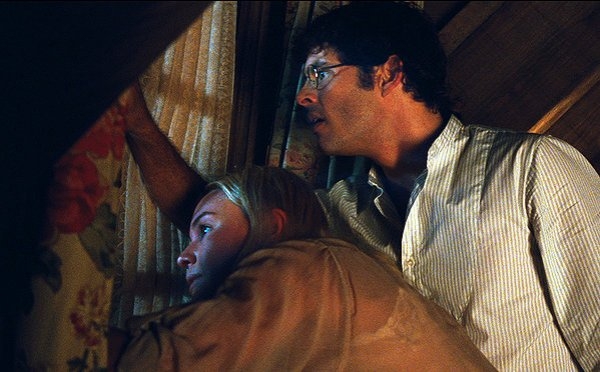 It's always the same when you order a pizza. One eye out the window, the other on the clock. Has it been thirty minutes yet?

Straw Dogs is not an easy movie to get through emotionally. It has about the same impact on the psyche as actually getting into a fight does. While it's happening, you're filled with adrenaline and rage, and that lasts for a while after the film ends. Then about an hour later, when you've fully digested what went on, you feel a little nauseous. A note about Marsden's performance: David's capability for violence doesn't spring up out of nowhere, it is subtly hinted at throughout the film. In fact, some of the film seems dedicated to making David really seem like a smug prick, so that by the end, he's the good guy mainly by virtue of the fact that he hasn't raped anyone. Which brings me to one of the film's more awkward features, the attempt to play Charlie as an anti-hero in certain scenes, because one member of his crew is more despicable than he is. It's a nice attempt, but it doesn't work. You don't get to put altruistic qualities on our villain just because he realizes that the film has some odd "blame the victim" undertones to it.

If the measure of a good movie is how well it accomplishes the reaction it wants from the viewer, then Straw Dogs is a definitely a good movie. However, I can't help but feel that I'm being slightly manipulated. This is a movie designed to make young nerdy males feel that they have some dark power waiting inside them. I am exactly the kind of person this movie is designed to impact the most. (By that I mean, writer/director Rod Lurie is a former film critic. It was designed to impact guys like me.) The only real question I still have is "Why?" The original Straw Dogs was released at a time when the increasing violence in movies was under constant controversy and media attention, so it made sense. Today it's simply an accepted fact. If you really want to be subversive, make Straw Dogs: The Video Game. (Please for the love of God do not make Straw Dogs: The Video Game.)

It is my greatest fear that this film will be misunderstood by everyone. The rednecks who are vilified in the film will walk away talking about how sweet the fight was. The Internet Males will walk away thinking how empowering a character David is. Both will miss the point of the film, but maybe they could go get burgers afterwards and come to the realization that they're not so different after all. Then the wedgies begin.

MINORITY REPORT: First The Wicker Man turns out not to be about a giant man made of wicker devastating the local populace, and now Straw Dog doesn't even have a dog made of straw? Film titles are getting misleading. - Ian "Professor Clumsy" Maddison