The Equalizer is finally here to restore balance to the box office. Or something like that. That's probably what the headlines will say come Monday. For now, take a look at all the mediocrity on display this week. We've got The Equalizer, which is basically every "aging action star kills people because it's the right thing to do" movie you've ever seen. Then we have The BoxTrolls, which should be the next modern classic from the people behind Coraline and ParaNorman. Hector and the Search for Happiness is the kind of Eat Pray Love knockoff that British dads all across America are going to eat right up. Finally, The Skeleton Twins is the indie flick to keep an eye out for this week. Yes sir, there really is a movie here for every taste.

EXPECTATIONS: Here's a film adaptation of a TV series that ran for four seasons during my toddler years. Fortunately, I seriously doubt they're banking on brand name recognition to put butts in the seats. If Denzel Washington can unleash his inner Liam Neeson/Pierce Brosnan/aging action star du jour, The Equalizer should prove to be two hours and change of tough guy staredowns followed by short bursts of brutal violence. Which is cool. That's all this film really needs to be.

REALITY: There's only so much Taken the world can take until it can't take anymore and just starts regurgitating Taken clones. Suddenly, men with the same particular set of skills are everywhere, exacting justice and putting a serious dent in the world's dwindling supply of henchmen. Enter The Equalizer, a Taken clone almost completely devoid of self-righteous anger and crippling xenophobia. It forgets to replace those qualities with anything more substantive or progressive, but I guess any step away from the politics of Taken is a good thing. 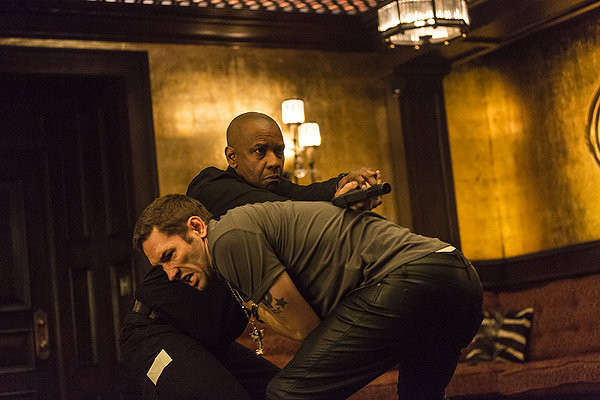 Meet Bob Killman. His superpower is that he kills you.

Bob McCall (Denzel Washington) lives a plain, ascetic lifestyle. He works a nine-to-five job at a hardware store, goes to a diner to read a book, comes home, goes to bed, and then does it all over again the next day. One evening, Bob meets Teri (Chloe Grace Moretz), a prostitute with dreams of becoming a singer. Bob doesn't begrudge her line of work, but merely encourages her to find a way out. When Teri's pimp beats her within an inch of her life, Bob tracks him down, killing him and his men in cold blood. In retaliation, the Russian mafia sends an enforcer named Teddy (Marton Csokas) to deal with this mystery killer. In return, Bob then decides to rid Boston of the Russian mob once and for all.

As it turns out, Bob is a retired government agent, one of those men with Liam Neeson's particular set of skills. In fact, Bob goes the extra mile and times himself before doing anything even remotely dangerous. He shows no sign of weakness, rarely losing the advantage over his increasing roster of enemies. At times, Bob is a little too robotic in his quest for vengeance, flatly offering people the chance to walk away before delivering the gruesome death they so obviously deserve. Washington doesn't give his character much in the way of personality, but he makes up for it through sheer presence. He's genial, even a tad vacant at times, but he's always in control of his situation.

That may not sound like much of an improvement over Taken, but Bob's way with people is decidedly different from that of Bryan Mills. He isn't an overbearing father figure, keeping watch over his family like a frightened hawk. His role is more that of the community's older brother, lending a helping hand or some sage advice to those who need it. Bob just wants to help you better yourself, which is a refreshingly casual approach to this type of character. It's the only thing that humanizes what is otherwise a ruthless killing machine, but that little dose of humanity goes a long way in crafting a character that isn't immediately repulsive. 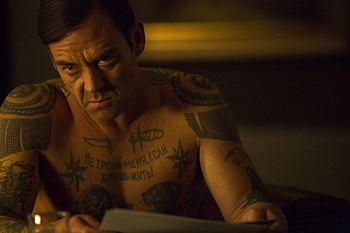 Meet Killman's nemesis, Teddy Murderson.I honestly wish I could describe The Equalizer as a tight action thriller, but at 131 minutes, that would just be a straight up lie. As efficient as many portions of this film are, other whole sections feel utterly superfluous. For example, at one point Bob flees to an estate out in the country to meet with a former colleague. It's a scene designed to do two things, and it does neither one particularly well. First, it's meant to provide some exposition about Bob's adversaries. Instead, Melissa Leo shows up, dumps a bunch of classified documents into Bob's lap, and then completely disappears from the film. Second, it's meant to give Bill Pullman something-anything-to do. Or at least, I think it is. Otherwise why is he even here? It just feels like they shot this scene in Bill Pullman's house and he happened to sit down in the middle of a take. A phone call would have served the scene just as well, and in a fraction of the time.

That is the main problem with The Equalizer in a nutshell: Parts of it run on for far too long, and often for no particular reason. The film's final action sequence starts well enough, with Bob laying down deathtraps for Teddy and his goons, but eventually the sameness of it all bogs everything down. It gets to the point where you honestly don't care who wins or loses, because they've established pretty firmly that Bob can literally rip a man to shreds with nothing but a corkscrew.

Up until that point, though, Antoine Fuqua does a decent job of keeping the pace brisk and letting Denzel Washington's dead-eyed stare do most of the film's heavy lifting. (For real, this thing is loaded with extreme close-ups.) It's a bit of a step up from Olympus Has Fallen, which fell victim to taking a silly premise far too seriously. Here, The Equalizer may be yet another Taken clone or Punisher knockoff, but at least this hero is painted with a faint shade of humanity.