The Green Hornet; The Dilemma; The King's Speech

EXPECTATIONS: My interest in Vince Vaughn movies died a grisly, tragic death back in 2009, when Couples Retreat swindled me out of $7 and two hours of my life. My mere tolerance for Vaughn's anti-shenanigans plummeted into negative digits last month when The Mayor of Cable TV decreed that it just wasn't Christmas without three showings of Fred Claus per day on six different channels until the new year.

You'll understand, then, if my excitement for The Dilemma is minimal at best. Will it be funny? Will it be romantic? I think a better question to ask might be "Will it be irritating?"

REALITY: Oh yeah, it's irritating, all right. Within ten seconds of the opening credits, the first thing we hear out of anyone's mouth is the distinct ass-like braying that is Vince Vaughn's laughter. Right from the word "Go," I knew I was in for a painful experience. Now, before I start ragging on this film just for being stupid, I have to preface it by saying this: If ever I had to label a film "Not For Me," The Dilemma would most certainly be it. It's not that I categorically hate romantic comedies, but ones this transparently written grate on my soul.

Vince Vaughn and Kevin James are Ronny and Nick, two gearheads preparing to make a deal with Chrysler to build electric engines for muscle cars (remember the minor shitstorm a few months ago about Vince Vaughn calling electric cars gay?) While scoping out a good location to propose to his girlfriend (Jennifer Connelly), Ronny discovers Nick's wife (Winona Ryder) sneaking around with a young musician/douchebag (Channing Tatum). Ronny wrestles with his newfound dilemma: Keep quiet and let his friend's marriage stand atop pillars of lies and deceit, or tell Nick about his wife's infidelity and send the marriage crashing to the ground in a blaze of glory?

The Dilemma is a well-made film with a terminal case of the Who-Gives-A-Shits. As a director, Ron Howard is more than capable of making this pablum watchable. My beef isn't with him. My beef is with the writers of this debacle. First of all, the film's namesake "dilemma" is textbook sitcom conflict. Who gives a shit? It's barely enough to hang an entire movie on, so they decide to throw in the "dilemma" of whether or not Ronny and Nick will get Chrysler to sign off on their cars. Who gives a shit? Plus, since Ronny doesn't want to tell his girlfriend what's going on, he has to construct some elaborate lie to cover up his stupid shenanigans, which only makes the situation worse. Ha ha. Who gives a shit? 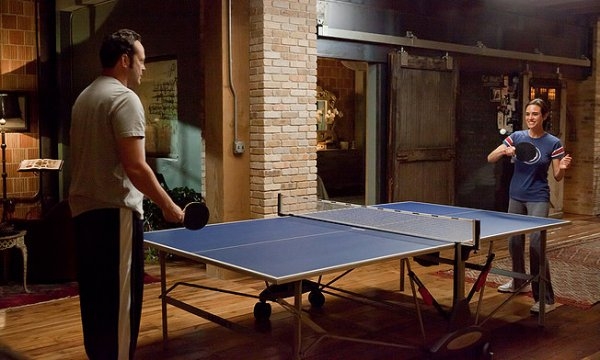 Oh hello, Jennifer Connelly. Didn't you used to be an actress?

The problem that movies like this always run into is that they ask their characters to do completely illogical things just so the plot can move forward. Ronny refuses to clue his girlfriend in on Nick's wife and her Channing Tatum affair, but to what end? Does he seriously stand to gain anything by not telling her? Does it really make his dilemma any easier? The answer is no, of course it doesn't. It's just an excuse to make Vince Vaughn do a faceplant into some poisonous plants or throw a guitar through a fish tank or threaten to burn Channing Tatum's face off with a can of hairspray. Movies like this love to take a simple premise and pad it out with a bunch of unrelated slapstick just so husbands and boyfriends can enjoy something in between all this relationship crap.

Then, of course, there's the strange case of Vincent Anthony Vaughn. He's reached a point in his career where he can have a movie tailor-made to his talents, but really all he's doing is just getting paid assloads of money to act out his teenage fantasies. In Couples Retreat, he made his character the software developer responsible for making Guitar Hero. In this movie, he gets to sell muscle cars in Detroit. I imagine his next movie will have him playing screen legend, ladies man and all-around cool guy Vince Vaughn.

All kidding aside, though, Vaughn stumbles through this movie spewing complete nonsense. His fast-talking bullshitter routine is fine when he's playing second banana or something like that, but as the main character, he's intolerable. Because his character is someone who knows cars and sports (get it? he's a guy), 90 percent of Ronny's dialogue is some kind of fuel-injected sports metaphor gibberish. Hey, Ronny, nobody gives a shit about your football metaphors. Just talk like a fucking normal human being. Nick is really no better, but because he gets about half the screen-time and we actually see him working on cars, I'm willing to allow it.

In fact, if anyone in this movie deserves the MVP award, it's Kevin James. He wisely refrains from doing any of the goofy physical comedy that he so famously sucks at and actually turns in a halfway decent performance. Plus, he gets to knee Vince Vaughn in the balls. That's worth about a trillion brownie points in my book. I might not be a fan of Kevin James' comedy, but I'm now jealous of the man for doing something I'll probably never get the chance to do.

Kudos to you, Mr. James. We here at Current Releases salute you.

MINORITY REPORT: Kevin James is to Chris Farley what Jim Belushi is to John Belushi. Every moment he spends on screen serves as a sharp, painful reminder that the funny one ain't ever coming back. - Martin R. "Vargo" Schneider