EXPECTATIONS: I don't know how to feel about this one, honestly. Of course nobody on Earth can actually make a movie about any part of Walt Disney's life without his monstrous legacy wrapping its uncaring tentacles around it to squeeze whatever money it can from its corpse. And of course they would never allow uncle Walt to be portrayed in anything less than a perfectly inspirational, warm and friendly way by someone suitably avuncular like Tom Hanks. On the other hand, who doesn't want to have tea with uncle Tom Hanks as uncle Walt Disney?

REALITY: Saving Mr. Banks is not the film I was expecting it to be. It is mawkish, sure, but it was also an unusually upsetting and depressing experience at the same time. It's rather an odd experience all around, really. Saving Mr. Banks attempts to balance two very different stories and is not always successful at it. When it's on form, it really works, but it just can't seem to decide if it wants to be a masterclass in emotional manipulation, a light-hearted comedy or a depressing period movie. 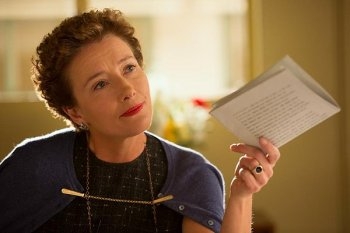 A rare non-grumpy moment.We follow P.L. Travers (Emma Thompson), the author of Mary Poppins on her visit to Los Angeles to meet with Walt Disney (Hanks) in an effort to discover just what his plans are in adapting her work into a movie and maybe hand over the rights if she is sufficiently pleased. Of course, what she finds is a disconcerting display of cheeriness, cartoon penguins and songs with made up words in them.

Cleverly, Saving Mr. Banks portrays Travers' relationship to Disney and his team of writers and musicians (Bradley Whitford, B.J. Novak and Jason Schwartzman) as a relationship with an entire country. They are all basically the same character, the Americans, and their initial chipperness and overly-friendly demeanour runs quite at odds with Travers' grumpy Britishness (or British grumpiness) and it's something I can relate to from my recent trip to your heathen country. Stop telling me to have a great day, I'll have whatever kind of day I like.

As she is brought around gradually to the idea of a Disney adaptation of her beloved work, it is related through her growing fondness for the once-interminable Americans that surround her, chiefly her driver Ralph (Paul Giamatti) whose smiles and enthused greetings soon give way and reveal the man underneath and Travers sees that in all of these strange cartoon people, even Disney himself, there is humanity.

Of course, my worries about the portrayal of Walt Disney as some kind of sweet old uncle to the whole world that only wants to make children happy and make adults feel like children who are also happy were entirely correct. Here, Disney is played by Hanks as a kind of wise old teddy bear whose answer to everything is usually coated in sugar or full of dancing animals. He equates the distant father of Travers' book - the titular Mr. Banks - to his own father and claims to want to honour his memory with the portrayal of the character in the film. In one climactic scene, he and Travers share a pot of tea and it's difficult to fight the urge to crawl onto his lap, tug affectionately at his mustache and ask for a bedtime story. The truth of this? We may never know, but as portrayed here it honestly rings a little false. 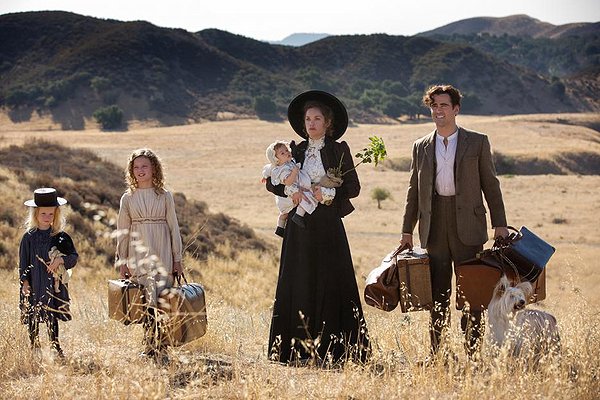 Meanwhile, in a completely different film that is also somehow the same film.


One of the biggest missteps of Saving Mr. Banks is that it offers very little in the way of a relationship to the actual film whose production it seeks to dramatise. Much like My Week with Marilyn, Saving Mr. Banks doesn't care to evoke the cinematic stylings that defined the film that is its subject. Having Emma Thompson dance with cartoon penguins may have been a step too far, but it would also have been the kind of stylistic flourish that would have made the L.A. scenes that little bit more cinematically interesting. That's what these sections are missing: style. Because the story offers little to any audience member here; there is, after all, no suspense in whether or not Mary Poppins ever got made.

Where the style does pick up is in the frequent flashbacks to Travers' childhood in Australia, where her father (Colin Farrell) drinks himself into a stupor and dies of coughing blood into a handkerchief in a period movie disease. Here, the film takes on a cinematic fervour with power and immediacy, which the L.A. scenes were so sorely missing that you'd think a different director had put them together. There is even one moment that blew me away, wherein a simple use of aspect ratio trickery narrows the field of view in a single shot. I think you can perhaps thank the greater freedom of dramatisation in these scenes for the amount of flair employed in their realisation. 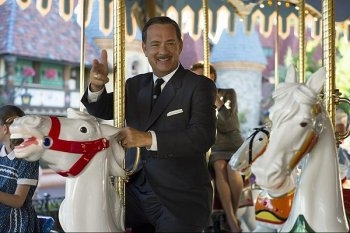 Tell me a story, Tom.These scenes, though, are just horribly depressing. As somebody who has struggled with some of these issues, it was very personally upsetting for me to watch a young girl intervene in her mother's suicide attempt that was prompted by that very same little girl's enabling of her father's rampant alcoholism. You can see now why a few dancing penguins might have alleviated some of the tension of seeing the now grown woman attempting to retroactively save her father with the help of a magical nanny who slides up bannisters and flies over the streets of London.

Towards the end, Saving Mr. Banks lays down its ultimate gambit and it is an interesting one. As Travers is led into the premiere of Mary Poppins on the arm of someone in a Mickey Mouse costume, we see that Disney is hoping to extend then experience of the film out into the real lives of the audience. The magic doesn't stop at the door of the cinematheque and neither does the tragedy. Everyone brings in their own baggage to film, even if it's a light-hearted romp like Mary Poppins. During the premiere scene, the camera focuses entirely on the face of Emma Thompson, who weeps throughout the film. Watching her bawl as David Tomlinson starts to sing "Let's Go Fly a Kite" is touchingly profound and in that moment, I too began to cry.

Skilled moments of emotional manipulation can easily win you over. When a sentimental film successfully conjures forth tears from the face of an audience member who wasn't expecting it, you can perhaps liken it to a stand up comedian successfully getting a laugh from a previously stoney face in the crowd. These are practiced skills and it's easy to ignore that when evaluating a work of art, but we have to admire it really. Emotional manipulation, when done correctly can uplift your experience, especially when the work itself draws attention to that fact that your experience does not start when you enter and end when you leave, you bring everything in with you and take the art with you on the way out. Saving Mr. Banks really just needed to be a better whole, something less schizophrenic in tone.

MINORITY REPORT: I feel like this whole film could have been a lot shorter if Walt had just skipped ahead and said "Ms. Travers, this is Julie Andrews, she'll be playing Mary Poppins." She would sign the rights away immediately. No one can say "No" to Julie Andrews, it's basically her magical nanny power. - Martin R. "Vargo" Schneider