We're taking some interesting journeys this week. Ian "Professor Clumsy" Maddison takes a journey to Asgard and back with Thor: The Dark World, Joseph "Jay Dub" Wade takes a journey into the past with Free Birds and Martin R. "Vargo" Schneider journeys into the more recent past with About Time.

EXPECTATIONS: I know what you're all thinking. Here comes the superhero hater to hate on the superhero movie. I don't really hate superheroes. I just hate most of the films that have superheroes in them, especially the ones that come from Marvel Studios, whose formulaic output led to the completely manufactured phenomenon of The Avengers, the watching of which I rank alongside ice skating as one of the least enjoyable things a human can do for enjoyment.

I did, however, recently get around to watching Captain America: The First Avenger. While it does hue to the formula, Captain America has a lot more heart and focus than any of the other Marvel Studios movies I have seen. I would attribute this to director Joe Johnston who is the guy that the big studios often call in to save failing productions and is therefore often overlooked by critics and audiences. The relevance of this is that while Marvel will often call in name directors like Joss Whedon and Kenneth Branagh, they would perhaps be better served by the kind of directors who steamroll in and get the job done. They need some in-house talent helming these films. Thor: The Dark World is directed by Alan Taylor who is mostly known for his television work. That could end up working in this film's favour. 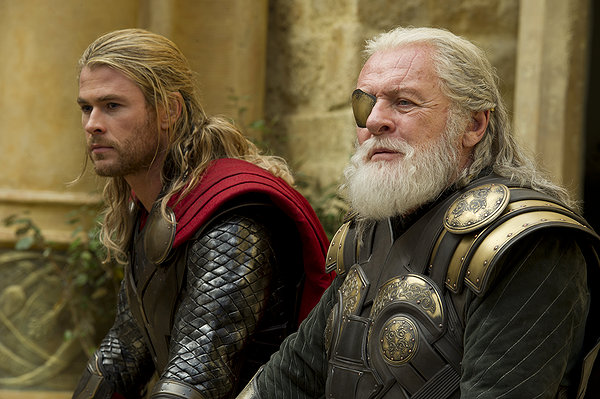 
REALITY: Well, I'll be tickled pink. Thor: The Dark World is what we in the film criticism business like to call a good film. It's no masterpiece, don't get me wrong, but it stands alongside Captain America as a film that is head and shoulders above its studio siblings thanks to a singular focus and succinctly executed character dynamics. This is genuinely enjoyable.

Thor: The Dark World begins, thankfully, with a rather tidy recap for newcomers and the willfully forgetful. In Asgard, Loki (Tom Hiddleston) is in jail, Thor (Chris Hemsworth) is out fighting battles around the nine realms and their father Odin (Anthony Hopkins) is stewing about stepping down from the throne and letting his son take over as king. The threat this time comes from the long slumbering dark elves Malekith (Christopher Eccleston) and Algrim (Adewale Akinnuoye-Agbaje) who want to get their hands on a mysterious weapon called the Aether so they can win a centuries-old war with the Asgardians. It just so happens that Jane Foster (Natalie Portman) and her intern Darcy (Kat Dennings) have found a gravitational anomaly back on Earth that leads then directly to the aforementioned MacGuffin, which brings the mighty Thor back into their lives. 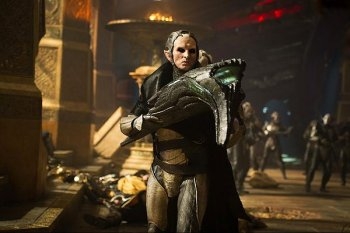 Wait, I'm confused. Is this Lord of the Rings or Star Wars?I was quite relieved to see that there were no signs of Nicholas Furious or his wisecracking, leather-clad underlings who poke their noses into every Marvel movie just to let us know that there are others we need to see. Thor: The Dark World is stronger for their absence. The key word here is structure. While the first Thor movie tried to be two films at once and wasn't particularly good at being either one of them, this sequel know what it needs to do and doesn't waste its screentime. There is a conciseness to this film that we've been missing previously and it lends itself finally to an entertaining two hours. The pace is mostly tight and everything comes together nicely in the third act as the convergence of the nine realms and the gravitational anomalies that it causes are tied in very nicely with the final confrontation between Thor and Malekith.

There are certainly some issues here, although they are relatively minor compared to what could have happened. Malekith and Algrim aren't especially interesting antagonists. Both Christopher Eccleston and Adewale Akinnuoye-Agbaje are actors I'm very fond of, but watching them here left the impression that they really could have been anyone. Eccleston is unrecognisable and does little more than stand stoically and utter lines in a gibberish elf language with voice distortion, while Akinnuoye-Agbaje spends most of the film stomping around in heavy monster makeup grunting and snarling. He's good at it, but this isn't like The Wolfman where a great deal of his performance shines through the makeup, this could have been any tall stuntman. It's a damn shame, because these actors and characters end up being wasted, especially in the third act where Eccleston should really have had a chance to ham it up, but alas no.

Not lacking in an opportunity to ham it up is Tom Hiddleston, here making his third appearance as the antagonistic Loki. While his role in The Avengers was mostly confined to being the worst villain you could imagine, they find an interesting use for him this time around when they introduce us to Loki the anti hero. In the second act, Thor turns to the imprisoned Loki for help, bringing him on side to take the fight to the dark elves. Of course this makes sense, when you follow the formula. 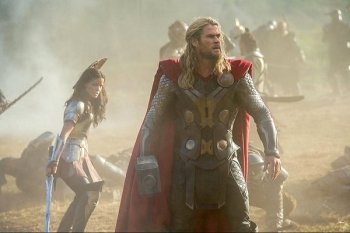 Or is it one of those Sam Raimi produced TV shows where they pretend the California desert is Medieval Britain?All of these superhero movies have our lead character picking up two surrogate father figures, one whose teachings the hero takes to heart but who then dies and one whose paternal interests turn antagonistic. You can apply that to most superhero movies with ease and the more you look the more you see how filmmakers make an effort to shift and warp the boundaries of that formula. Batman Begins, for example, becomes a game of "count the dads" as Bruce Wayne travels the world apparently collecting them. Captain America waylays the usual antagonistic dad to make the villain a kind of distant brother figure and the antagonistic father figure becoming more paternal as the narrative moves on. Thor is quite interesting in this regard, while Thor himself does have two father figures, one is his actual father and the other, Dr. Erik Selvig (Stellan Skarsgård, here demoted to comic relief), doesn't entirely fulfil his part of the formulaic bargain by neither dying or being antagonistic. Looking at the formulaic elements of Thor alone, Loki comes out looking like the hero, so of course he gets to act on that in this sequel.

Also being used to good effect is Natalie Portman, who pretty much carries the film through the first act. She and Kat Dennings have an excellent comedic chemistry and she sells the depth of the longing for Thor in a very believable way. She is the human centre of the film and that is exactly what this franchise needs more of.

With Alan Taylor, Marvel Studios have found a director who has something they need: discipline. This is a man who has made a long career on hour-long television dramas like The Sopranos, Lost, Mad Men and Game of Thrones. He knows how to wrap up a single story in one hour, with advert breaks. With next year's Captain America sequel being directed by sitcom auteurs Anthony and Joe Russo, it seems like the studio have learned a lesson. When you're churning out formulaic film geared toward pushing a greater narrative in a manufactured phenomenon, you need directors who can get the job done. Just get it all on screen and throw some interesting ideas at it and you've got a movie. Are we seeing a return to the studio system heyday? Probably not, but someone at Marvel Studios wants us to think so and they're finally going the right way about convincing us of it.

MINORITY REPORT: I'm glad to hear this film keeps the feminist ideals of the first. The only interesting thing about Thor is that it occasionally became Female Gaze: The Movie. Kenneth Branagh just happens to believe that all women see the world at Dutch angles. - Martin R. "Vargo" Schneider