EXPECTATIONS: I have never read a Lee Childs novel, so I haven't joined the line of protestors waving placards saying "NO TOM CRUISE," because I have no idea who Jack Reacher actually is. However, I do recall a similar scenario playing out when Cruise was cast in Interview with the Vampire and those people all ended up with egg on their collective face. Aside from his acting, I find Cruise to be a very interesting film producer who uses his weight to get up-and-coming directors to explode into the mainstream. This time around, he has The Usual Suspects screenwriter Christopher McQuarrie at the helm and surely that's interesting enough to win you over?

REALITY: Jack Reacher is your typical plotty thriller with a few moments of greatness thrown in. There's a seed of something very promising here that could sprout into a very interesting franchise, but as a single cinematic statement it offers little new. It will, however, thrill dads the world over. It's a perfect dad film, unless your dad hates Tom Cruise, like mine does. 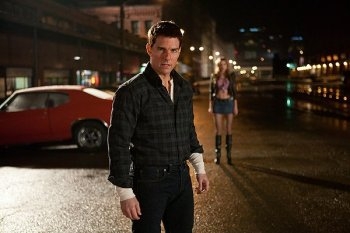 Seamless forced perspective shots allow Cruise to appear taller than some women.When a man is framed for the random shootings of five people in a public park, he insists that the D.A. (Richard Jenkins) get hold of Jack Reacher (Cruise), one of his old army acquaintances, to help clear his name. Shortly after, the man in question is beaten into a coma and Reacher must start the investigation with nothing to go on. Aided by Detective Emerson (David Oyelowo) and lawyer Helen Rodin (Rosamund Pike), who is also the D.A's daughter, Reacher is drawn deeper and deeper into a conspiracy led by a mysterious figure known only as The Zec (Werner Herzog... WERNER HERZOG!?).

It's a thriller, so there are a whole pile of plot twists thrown in along the way and none of them really matter. What matters is that we get to see the title character going about his business in his own unique way. He's a Sherlock Holmes-style independent super sleuth who wins fights against multiple assailants and figures everything out from a single glance. As played by Tom Cruise he is basically Tom Cruise as Tom Cruise wishes Tom Cruise could be. He fluctuates between charmingly smug (or smugly charming, depending on your perception) and violently intense, just like he does in all of his films. Personally, I enjoy Cruise's screen presence, but your own mileage may vary, especially if you're a fan of the books.

This no-nonsense American hero is really an interesting phenomenon. First Blood, Lethal Weapon and now Jack Reacher have all given some weight to this idea of the war veteran, suffering from Post-Traumatic Stress Disorder, returning to America to find his country isn't what he hoped it would be. Jack Reacher feels like the logical progression to that idea. What happens if John Rambo doesn't give himself up to Trautman to find another use for him? What happens if Martin Riggs doesn't settle down and become a cop? The answer is they become like Jack Reacher, a man still doing exactly what he did in the army, only now he's doing it at home and all of his enemies are domestic. Reacher is still fighting his fight, staying hidden and doing what he thinks is the right thing. He'd probably be happy putting on Judge Dredd's helmet and doing all of this stuff in the name of a law that suits him; however, this film has a much more positive attitude than Dredd. Jack Reacher suggests that there is still some use for these men broken by combat, they are the NRA's mythical "good men with guns" ready to pick off the bad guys in the name of justice.

There is even a streak of wry humour thrown into the proceedings, almost as though the whole film were actually mocking everything it appears to condone. When the ending comes and Reacher does what he does, you may leave feeling conflicted. Of course Reacher will do his thing, it's what makes him Jack Reacher, but how are we supposed to feel about it? Amused? Shocked? Elated? As Jack himself says "I'm not a hero," and that moral ambiguity is one of the film's greatest strengths. 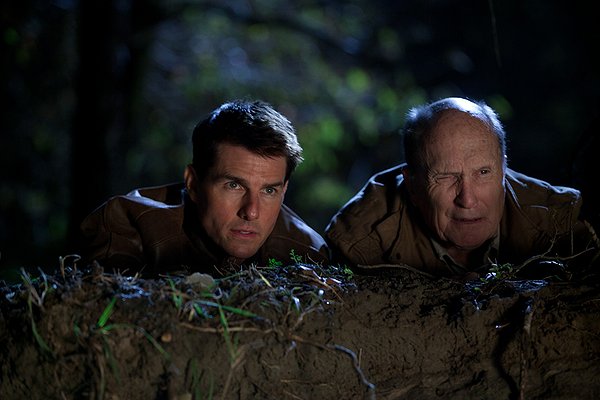 One day they'll remake this and Cruise will be the one on the right.

Unfortunately, this strength is let down by some egregious weaknesses, the greatest of which is the antagonist. Now, I know you were all super excited about legendary German film director Werner Herzog - the man who famously ate his own shoe - playing the villain in a Tom Cruise movie. We all were. We were expecting a repeat of the excellent madness of David Cronenberg in Clive Barker's Nightbreed: A mad director set loose as a movie villain. Unfortunately, Herzog doesn't really do an awful lot here. It's not his fault, his presence alone carries a lot of his scenes and hearing his distinctive voice deliver speeches on the nature of survival is powerful when it happens, but it doesn't really add up to much. When your central plot revolves around a real estate conspiracy it seems like an odd decision to put this nameless monster at the top of it all.

That's fundamentally the problem with everything in the film. These flashes of greatness fail to elevate the standard crime thriller that holds no real surprises. Herzog is great, but he's barely there and when he is there he might as well not be. Reacher is a great character, but all he does is do some run-of-the-mill super-sleuthing a la most American TV shows from the early 2000s. It's never enough. It wants to be in the same vein as the great character thrillers of the 70s, like Marathon Man, Bullitt or The French Connection, but it's marred by hewing to this familiar template.

There is one element in this film that makes it unmissable: the cinematography is absolutely fantastic. This is one of the best-looking films of the year and I would descibe Caleb Deschanel's work here as even better than Roger Deakins' work on Skyfall, another flawed-but-beautiful thriller. There's a richness of colour here and a starkness of contrast between different locales that you don't tend to see today. Most Hollywood films of this type would opt for a pallette of greys and browns, trying to reflect the tone in the visuals. But, Deschanel and McQuarrie capture something much more interesting by choosing something that is arguably less consistent. A second-act car chase is rendered as breathtaking as a car chase can possibly be, and even dark night-time scenes have a brightness and richness to them. Compare Jack Reacher's climactic scene to any given scene in Expendables 2 and you'll see what I mean. I really hope this does launch a franchise if only so that we'll get more films that look like Jack Reacher.

MINORITY REPORT: Leave it to a British author to capture two things essential to the contemporary American experience: the plight of PTSD-afflicted war veterans and our nation's nasty habit of creating and solving our problems through gun violence. - Sean "Keanu Grieves" Hanson