EXPECTATIONS: As a producer, Judd Apatow has engineered some of the biggest, goofiest comedies of the past decade. As a director, he's seemed to distance himself from all that silliness by making 'real' comedies about the way real people really live. If This is 40 is anything like Knocked Up or Funny People, I expect it'll be forty-five minutes too long, feature ten too many characters, and make me instantly regret agreeing to watch it with my mom.

REALITY: In many ways, This is 40 is Judd Apatow's most agreeable effort to date; it's got heart for miles, the humor isn't anything too outlandish, and his kids are finally starting to figure out how to act. On the other hand, he puts in only the bare minimum of effort in telling his story. Without a manufactured dilemma for Paul Rudd's character, This is 40 might well have been titled This is Judd Apatow's Family.

Five years after the events of Knocked Up, we find secondary characters Pete (Paul Rudd) and Debbie (Leslie Mann) on the eve of Debbie's 40th birthday. Debbie finds the idea depressing, and does everything in her power to stay young and fit. She's even taken to daily training with Jason (Jason Segel; also reprising his role), who vows to turn her body into a boner machine. Meanwhile, Pete has started his own record label for music nobody listens to and is desperately searching for a way to market the new Graham Parker album. 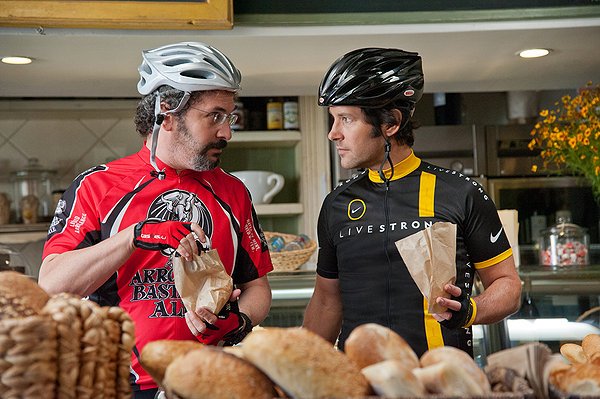 I would like to continue summarizing the plot, but from here it would simply become a detailed list of all fifteen of the film's various subplots and dead-ends. Debbie and Pete's daughters hate each other; Pete's dad (Albert Brooks) is a worthless mooch while Debbie's father (Jon Lithgow) is a rich surgeon who wants nothing to do with her family; Debbie suspects one of her employees (Megan Fox) of stealing money. The list goes on, and yet very little of it adds up to the film's ultimate point. It's as if Apatow had a chart of unused ideas and threw a dart every time an actor called him up looking for work. This would certainly explain the presence of Chris O'Dowd and Melissa McCarthy.

The film's marketing bills it as "the sort of sequel to Knocked Up," which is technically true, but there really is no 'sort of' about it. At the heart of Pete and Debbie's bickering lies the question "Would we still be together if we'd never had kids?" It's a valid question for the couple, but one can't escape the feeling that had Katherine Heigl not thrown Judd Apatow under the bus for their earlier film, This is 40 might have starred her and Seth Rogen at one another's throats. Perhaps it's for the best, though, as Paul Rudd and Leslie Mann play effortlessly off one another, and their malaise here is more believable than the cartoony banter that plagued Knocked Up.


This is 40 is a film about the twists and turns that every life eventually follows. Pete and Debbie are entering middle age, and it's up to them whether to let that fact consume their every waking moment or to take it in stride and keep enjoying what they already have. The struggles that Apatow puts his characters through are real, and he's almost certainly drawing from arguments with his own wife who, incidentally, is the star of this film. What better way to resolve an argument with your wife than to film it and let Paul Rudd do all your shouting for you?

At two hours and fifteen minutes, This is 40 isn't quite the bloated mess that Funny People was, but it's still far too long for a story this flimsy. It's hard to say how one could shorten the film, as most of the subplots tie together, but none of them build toward anything. I suppose that's the game Apatow is playing here, but while real life might be a series of fizzling subplots, cinema demands something a little more concrete. Judd Apatow has proven to be very smart at directing verbal comedy, now if only he would work on telling a compelling story go to with it.