EXPECTATIONS: Does the Cult of Twilight know no bounds? First we have to put up with these... No, you know what? I'm not going to do this again. I'm not going to drag that series into another review just because Abduction stars a person from a Twilight movie. If there's anything Taylor Lautner should succeed at, it's a Face Punch-style action film. John Singleton is a director who's more than capable of getting a decent performance out of this kid, so I expect at least a halfway-entertaining kickfest with some fisticuffs on the side. Really, is that too much to ask for?

REALITY: Apparently, yes. Yes it is. From the opening scene, in which Taylor Lautner rides into town on the hood of a truck, it is glaringly obvious who this film's target audience is, and it intends to give them what they paid for as much as possible while still maintaining the pretense of being an action movie with characters and a plot. In other words, Abduction is an empty-headed action thriller specifically manufactured to appeal to Team Jacob. 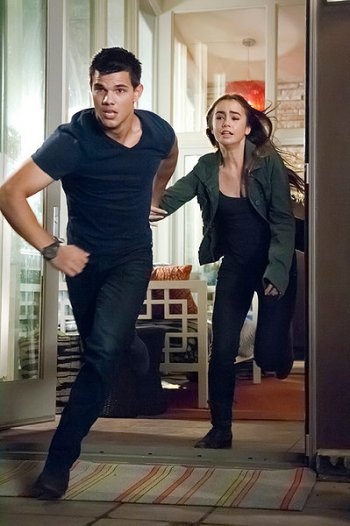 Taylor grabs his girlfriend and runs as soon as the barman asks for I.D.As the movie opens we meet Nathan (Lautner), a high school senior who goes to parties and hangs out with his friends like normal teens do, except Nathan can't get over this feeling that he's different somehow. While working on a sociology project with classmate Karen (Lily Collins), Nathan discovers his picture on a missing children website. After some detective work he learns that he was indeed adopted, and soon a couple of secret agents show up to kill him and his family. On the run, Nathan and Karen find themselves in the middle of a cat-and-mouse game between CIA operatives (Alfred Molina, Sigourney Weaver) and a Russian cyber-terrorist (Michael Nyqvist).

Who are Nathan's real parents? Why do Russian hackers want to kill him? Why is Alfred Molina acting like such a dick all of a sudden? These are questions that the movie eventually answers, but not before forcing the viewer to endure countless money shots of Taylor Lautner in varying degrees of sexiness or badassitude (and sometimes both). It's discouraging, because I'd like to think cinema is better than this. In fact, I know it's better than this. Look, there is nothing wrong with casting an actor in your movie because he or she has a built-in audience. That's how most star-driven vehicles operate. Hell, that's why they call it a "star-driven vehicle." But when your movie is transparently designed to make fans swoon over a chiseled body at the expense of an intelligible plot or any of the other things that make movies entertaining, that's when the star-driven vehicle careens off a cliff into a fiery explosion at the bottom of Beefcake Canyon.

A hundred slow zooms into Taylor Lautner's brooding face can't save Abduction's plot from being an incoherent mess. Once it's revealed that Nathan's parents aren't really his parents, the movie switches gears almost immediately into a man-on-the-run action film where it's never really made clear who is chasing after him. The film introduces both the CIA and the Russian terrorists simultaneously, which causes both factions to blend together, confusing the audience even further. Obviously they're both bad guys; otherwise, why would they both be chasing after Nathan? Of course, the movie finally settles on which people Nathan can trust, only to then call that into question fifteen minutes later through a series of phone calls and important heart-to-heart conversations that only serve to reveal more useless exposition. The result is a film whose running theme seems to be "Don't trust anyone over 30, unless their name is Sigourney Weaver."

When they're not busy hiding from everybody, Nathan and Karen spend much of the film's second act tracking down clues about Nathan's parents. Because the villains are searching for Nathan, they start trying to track down his parents as well. And because this is a movie about how Taylor Lautner can do anything, he manages to stay one step ahead of both the CIA and Russian cyber-terrorists at the same time. What does it say about the global intelligence community that a kid with a BMW and a hunch is better at tracking people down than two rooms filled with computer nerds and government suits? 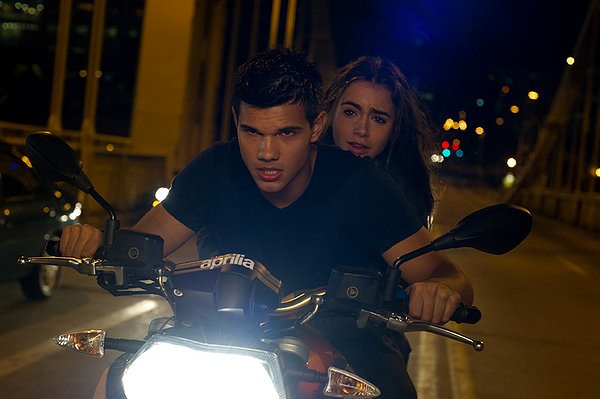 We have to hurry! My dad needs his bike back by ten o' clock.

Taylor Lautner has all the natural charisma of a freshly manufactured catcher's mitt. To his credit, though, he's pretty good at kicking people on-camera. Since this really is a movie all about him, few other actors are given a chance to make any kind of impression. Once it's made clear who our villain actually is, Michael Nyqvist turns in an interesting performance as the Russian bad guy. He plays Kozlow as though he finds that the only thing more perplexing than American culture is this elusive teenager he's trying to hunt down. It's kind of a fun performance, and it's too bad he only gets one scene to really ham it up. The confrontation he has with Lautner at a Pittsburgh Pirates baseball game is the one bright spot in an otherwise over-serious, under-developed action movie. If the filmmakers would have had the foresight to worry about creating a legible script before figuring out how best to light Lautner's abs, Abduction might have at least featured a couple more fun sequences like that.

Come to think of it, why is the film even called Abduction? Over the course of the film, not a single person is ever abducted. The secret mystery behind Nathan's real parents doesn't even involve kidnapping. You could argue that the people out to get Nathan intend to abduct him, but since he runs from them and roundhouse kicks more than a few of them, abduction really isn't in the cards. As far as I can tell, the only reason this film is titled Abduction is because the trailers heavily play up the idea that Nathan might have been kidnapped as a toddler. That's not at all the way it plays out, but I suppose Untitled Taylor Lautner Action Vehicle doesn't have much of a ring to it. It's too bad, because that's a better description than this movie deserves.

MINORITY REPORT: It's weird, I don't give a crap about Twilight, but liking Robert Pattinson so much has made me feel like I need to hate Taylor Lautner. Good to know I can hate him for a totally different reason now! - Martin R. "Team Edward" Schneider