EXPECTATIONS: Beside the fact that I'll have to overcome my lifelong hatred for dolphins, there are only two things I need to know before sitting down for Dolphin Tale: 1) the dolphin in this movie does not talk, or else Jay Dub would have had to stand up and take this for the team, and 2) At no point during this movie will the fact that dolphins have prehensile penises be discussed or demonstrated for any length of time.

REALITY: Dolphin Tale has one thing going for it immediately: It's preceded by trailers for Happy Feet Two and Alvin and the Chipmunks: Chipwrecked. If Alvin and the gang singing "Bad Romance" had segued right into a trailer for an all-rodent version of Triumph of the Will, my personal sense of disbelief couldn't have summoned a casual shrug. 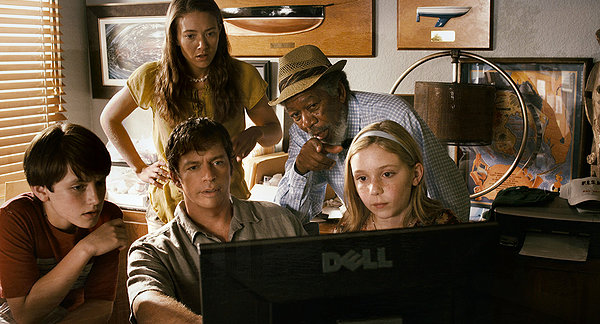 Dolphin Tale is a sight better than that. It's an 'Inspired by a True Story' story of an uninspired young man who finds a stranded dolphin on the beach and instantly becomes attached. The boy is Sawyer (Nathan Gamble), who has gone through the usual film upbringing: dad ran off, mom (Ashley Judd) works all the time. His surrogate father is his cousin Kyle, a state swimming champ who needs some money so he can train for the Olympics. Kyle sees his options and realizes that the best way for a state-record-holding athlete to get ahead is, of course, to join the Army and head into the desert. This devastates Sawyer, and he's adrift until the aforementioned close encounter with the injured dolphin.

The dolphin is taken to the local marine rescue center and has her tail removed due to a serious infection. Sawyer tries to sneak in to see the injured animal only to be confronted by Rufus, a large pelican who the filmmakers attempt to use as comic relief every so often. If you can think of what a pelican does-- namely sqawk and eat-- and take that to the limits of physical comedy, you've pretty much run the gamut of Rufus' appeal. The dolphin is in bad shape, but Sawyer's presence seems to lift its spirits. He finds that she's being cared for by a team of trained biologists, but mostly by Dr. Hasket (Harry Connick Jr), his grizzled father (Kris Kristofferson) and Hasket's precocious daughter Hazel (Cozi Zuehlsdorff, a name I quite obviously copied and pasted from IMDB). 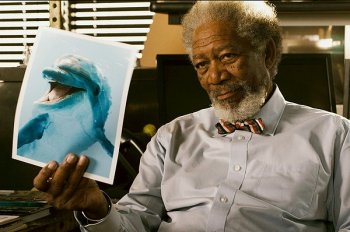 These rorschach tests are much less abstract that they used to be.The dolphin is hastily named Winter (after the season, not Alex Winter like one would suppose), and we soon get to watch as the film ricochets from cliché to cliché. The marine center is out of money, and the only solution is to sell out to a greedy land developer! Sawyer may not finish summer school because the evil teacher won't let him skip class to swim with dolphins! Winter can't swim without a tail or she may die! And cousin Kyle, like anyone who goes off to war with a heavy bout of foreshadowing in his or her rucksack, comes back seriously injured!

Sawyer has to deal with all of these challenges, and, ingeniously, manages to solve all of these issues through sheer grit and some conventional screenwriting. Sawyer runs into the excitable Dr. McCarthy (Morgan Freeman), who designs prosthetic limbs for disabled veterans. McCarthy agrees to help Sawyer craft a new tail for Winter, as well as talk to Kyle about snapping out of that self-loathing that watching all of your dreams and ambitions shatter will often lead to. But how to save the animal center? Here's where the movie treads into some unfamiliar waters (HA!). Instead of your typical "let's throw a bake sale and earn some dough," Dolphin Tale has Sawyer hit upon the idea of "let's throw a bake sale and earn some dough from disabled people."

Now, let's be honest here. The handicapped people who start to arrive at the aquatic center in droves to meet Winter do so because they, too, feel a connection to her: Her loss is something they experienced as well, and seeing it happen to a creature that most consider majestic is both humbling and touching. It allows people in this situation to reflect upon themselves, their circumstances and life, and a bond is formed. 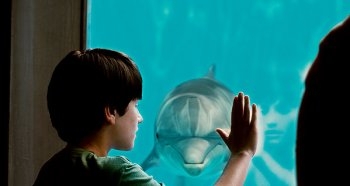 You're just showing off because you have thumbs. Bet you don't have a prehensile penis though.But watching Sawyer concoct his plan to save his dolphin friend by means of Winter's connection to the handicapped feels a little exploitative. It is desperation on his part-- Winter will die if funding can't be found-- but the film never goes deep enough to make the connections between Winter and the various disabled people she meets anywhere near as profound as what Sawyer gets. It's here we get the feeling that Sawyer has become an empathy pimp, shelling out Winter's situation to anyone who needs a boost.

The film still treats the disabled with respect, and for the audience of children for whom this film is intended, getting to see these sort of strange things up close may be helpful-- certainly a better dose of sympathetic reality than they're going to get from any shrill cartoon this year. And the undertones of simple niceness are hard to get irked at.

All the actors play to their strengths: Connick smirks, Judd frets, Freeman teases, and Kristofferson squints. They're all thoroughly professional, though Freeman makes the most impact-- his performance feels like someone opened a cage and shook him out. The two young actors are bright-eyed and bushy-tailed, and Winter-- a combination of puppets, animatronics, CGI, and a real dolphin-- is remarkably lifelike and empathetic to a fault.

Both the best and worst that can be said about Dolphin Tale is that it's almost monotonously innocuous. It lavishly devotes itself to creating a fictionalized, kid-friendly narrative that focuses on the idea of working past disabilities, both emotional and physical, to devote oneself to a nobler cause. There are no baffling morals about 'being yourself,' nothing objectionable in any sense, and it confronts the realities of war better than any other goddamn mainstream movie this year. And, no, no one talks about prehensile penises. Turns out Winter's a girl dolphin. I probably should have seen that coming.

MINORITY REPORT: Shortly after writing this review, I introduced Danny to the rest of the team. I left him to get acquainted with Monty Smythe and Monty must have decided to walk him home or something because I haven't seen him since. - Ian "Professor Clumsy" Maddison