Step Up All In

EXPECTATIONS: I have never seen a Step Up film before, but I have been told they feature dancing and thin plots, as well as a recurring character named Moose. I doubt I'm about to be blown away by cinematic brilliance, but I do have a fondness for things that are silly and fun, as long as they're not winking at me about it too much.

REALITY: Film is a delightfully varied medium. Some films have the power to inspire us to look beyond ourselves, and elucidate our feelings on the human condition. Some give us a fun and exciting experience to share with our children and family, bringing us closer together. Others speak to something special within us, resonate with us in a way that stays with us until our minds fade from this mundane realm. And, some films are the cinematic equivalent of impulse-buying your favorite candy: the decision to consume it was given no real weight or consideration, you enjoy it while it's happening, and then an hour later, you've forgotten about it entirely.

Two guesses what kind this movie is. 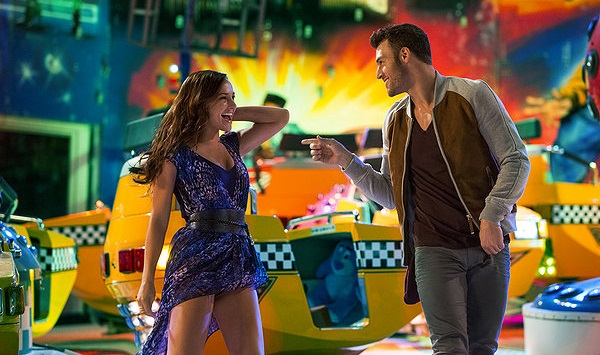 This certainly speaks to MY human condition.


Step Up All In is about a bland white dude named Sean (Ryan Guzman) who wants to dance for a living. His crew, frustrated by their lack of success, decides to move back to Miami, leaving Sean in LA. Blah blah blah, dance competition, winner gets a show in Vegas, etc. etc., Sean pulls together a crew with his buddy Moose (Adam Sevani) and a gal named Andie (Briana Evigan) to compete. There's a thing where a rival crew's leader is a dick, but who cares? You're not watching this movie for the plot (if you're watching it at all, which, unless you're a teenage girl, you probably aren't).

And that's really the thing about a plot like this, is that it exists purely as a vehicle for the dancing. This isn't a bad thing, necessarily, because if you're buying a ticket for this movie that's what you're hoping to see. Step Up: Fall In exists in the same realm as elaborate daydreams, trashy romance novels, and cheesy pornography, where a barely credible premise and universe is generated so that we can watch the fantasy unfold. It's wholly unrealistic and corny, but it's also a little sweet and brings all the joys of self-indulgence. The movie occasionally forces some drama in, but most of the conflicts resolve themselves before they even become real actual problems, and so we're brought right back to the fantasy. 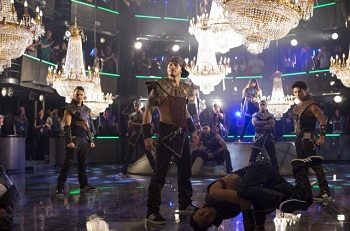 Step Up: Beyond ChandelierDomeStep Up: Small Shin does occasionally touch on a slightly more realistic aspect: just how hard it is to try to make a living as a performer, and why anyone would do it. Possibly the only real theme of the film is just how difficult it is to choose between the stability of a day job and the thrill of performing, but while this comes up a few times it's never really discussed in any depth. Bit of a shame, really, because had it been fleshed out, it would have provided the movie with more sincerity and heart.

Setting aside Step Up: Call Tin's unwillingness to have any depth at all whatsoever, the dancing is crazy great! It even goes so far as to sprint through several different types of dancing, including a neat little scene in an amusement park focusing on '80s moves that would not be out of place in your high school drama teacher's favorite musical. All the choreography is, unsurprisingly, very solid and exciting, which is great since it's why the movie exists. All the strongest portions of the film are when the plot elements get out of the way and the camera sits right on the floor or up with the crowd, giving you the view of an audience member watching an exciting live stage show.

It boils down to this: the plot is weak, the acting is mediocre (except Moose, Moose is pretty good), the humor is light and silly, and the dancing is great. If you want to forget about your cares for a couple hours and escape into a world of attractive people moving suggestively and with more energy than you could ever hope to muster, this is definitely the movie for you.

And I still have absolutely no goddamn idea what wins or loses a dance battle.

MINORITY REPORT: Handgun violence ultimately determines the winner of a dance battle. That's why I got my concealed carry. - Sean "Keanu Grives" Hanson