Wish I Was Here

EXPECTATIONS: Apparently during a drunken tirade, I let it slip that I "kinda liked Garden State in high school," because ever since I came back from hiatus, The Shins have been playing out of the speakers of the CR offices, and every TV is playing Scrubs reruns. (Not even the really good episodes with Brendan Fraser either.) This appears to be some sort of hazing by my co-writers, all of whom have agreed that until I go and see Zach Braff's newest batch of moping and naval-gazing ennui, my paychecks are being withheld, and likely donated to his next Kickstarter project. Because I hate poetic irony more than I hate smug whininess, you guys win. I'm watching Wish I Was Here, now please stop playing the Baby Back clip on repeat.

All the junk lying around Zach Braff's house your money can buy!

REALITY: I hope you're proud of yourself. Yes, I'm talking to you, Wish-I-Was-Here Kickstarter Donor. I hope you're pleased as fucking punch that you funded this, that you put legal tender towards this film's production and distribution. Look at it. Just look at it. This was the vision which you so desperately needed to maintain the purity of. So much so, in fact, that 42,000 of you delivered hard-earned money, actual money which could have been spent on literally anything else, so that it could happen. And this is what you got. Go to your room, you've disappointed your mother and I enough.

The story you idiots donated over $3M dollars to goes as follows: Emotionally stunted thirty-something Aiden Bloom (Braff) is forced to pull his children (Joey King and Pierce Gagnon) out of Hebrew school after learning that his cancer-stricken father (Mandy Patinkin) can no longer pay the tuition. Because of a long-standing fear of public school, Aiden is forced to attempt to home-school the kids, which interferes with his failing dream of being an actor and oh-my-God that is the whitest, most first-world conflict I can possibly imagine. Everything you can imagine would happen from a film like this does happen. Aiden grows closer his children, reconciles issues with his father, and rekindles his romance with his wife Sarah (Kate Hudson). It should be noted that Sarah, who is apparently the most patient, understanding, and possibly delusional woman on the planet for working full-time as a data entry clerk while her husband auditions to be a redshirt on a SyFy series. Sarah is the kind of wife you get when you are the one writing the screenplay where you get to be married to her. Anyway, Aiden is forced into emotional maturity kicking and screaming, and it's all so predictable and just so boring. 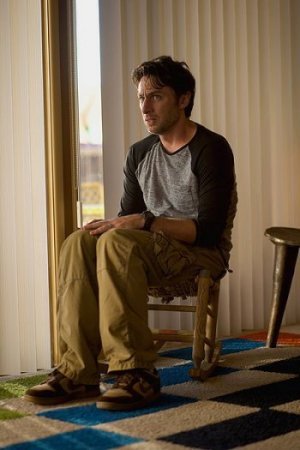 There's a metaphor here. I just know it.It's one thing to make a dull, unoriginal film, it's another thing to do so and just seem so smug about it. Braff's screenplay gives him numerous opportunities to make himself sound profound as he attempts to hold his family together. (By doing all of the things he should have been doing for years.) None of it is earned, but we're clearly supposed to root for Aiden while he does it. Here's an example: The film shoehorns in a sideplot wherein Aiden's brother Noah (Josh Gad), himself somehow an even bigger social shut-in than Aiden, puts together an elaborate sci-fi costume to go to Comic-Con and impress his hot nerd neighbor (Ashley Greene). Because apparently no one told Zach Braff that you win cosplay competitions by going AS something, Noah has to put together a generic space-person costume, and makes a helmet out of a fishbowl, conveniently at the moment of an argument. Why? So that Aiden can say "Y'know what the problem with hiding in a fishbowl is? Everyone can see you!" That line, that line right there was not worth the pages and pages of contrived script setup it took to get to it. Nor is it worth the $35 that it probably cost Janine S. of Rutherford, Ohio. And the movie is just full of that shit.

Credit where credit is due, the film is actually decent and compelling almost any time Zach Braff isn't on screen, because he's not constantly trying to remind us how angsty and deserving he is. In particular, Hudson's performance stands out as she steals a few tender scenes of bonding with her father-in-law. Sarah's subplot about dealing with an inappropriate co-worker is the most interesting and least explored of any of the half-dozen story elements at play.

The biggest issue is that, just like Frances Ha and several other films lately, we're supposed to cheer for our protagonist for doing basically the bare minimum to be an okay person. Aiden's advancement is primarily "oh, I guess when you have kids, your dreams have to be compromised for the good of those around you." This is a good life lesson to learn and all, but I can't help but feel our main character should have learned it sometime in-between his daughter's birth fourteen years ago and now. At the very least, before the second kid showed up. 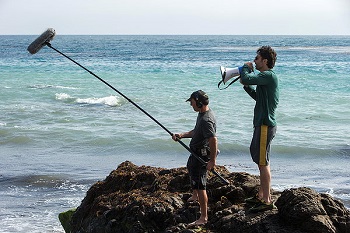 That's the ocean. You can't direct the ocean, Zach.Making this worse is that in this film, as is common in these morose fantasies, is that we spend 100 minutes watching a person be forced into acting like a functioning adult human being, and the instant that he starts to try to engage with the people around him, the second he puts forth even the bare minimum attempt at any kind of effort, then everything magically falls into place for him. "Hey, man, I noticed that you've suddenly decided to stop being an emotional and financial drain on everyone around you! Here, have EVERYTHING YOU'VE EVER WANTED! You've earned it!"

The irony of course is how this movie is about Aiden learning that pursuing his dream comes at the expense of others (and apparently the way he learns it is by pointing out his brother's selfishness?), but in order for Zach Braff to realize his dream of making and distributing Garden State 90210, he actively chose to rely on splitting the bill with the audience. I know that I'm really pushing this Kickstarter thing heavily, but I am just astonished at the utter lack of self-awareness it must require to make this film in this manner. I would almost believe it was done intentionally in a Freddy-Got-Fingered "haha, you paid for this" manner, if not for the fact that Zach Braff doesn't understand pranks. No, instead I'm forced to believe that it is sincere (or at least, that it really is screaming "LOOK HOW SINCERE I AM!") and that Wish I Was Here is a film which really is just that satisfied with itself, despite having literally no reason to be.

MINORITY REPORTS: I'm glad I can now experience the smug satisfaction of knowing that the Kickstarters I've donated to have greater artistic integrity than Zach Braff, AND give me potato salad. - Ashley "TwistedLadder" Herald

I took one screenwriting class in college, where I spent most of the semester writing a parody of Garden State. I hated the film that much. My script was titled Zach Braff's Couch World, which he apparently found in a garbage can somewhere, took out all the obscene hatred directed toward his character and just made the film as written. I'm waiting for my residual check, Zach. - Joseph "Jay Dub" Wade