EXPECTATIONS: In order to research for this review, I attempted to read the entire Wikipedia article for Jack Ryan (Character). Not only was it some of the most convoluted ridiculous Mary Sue-ism I've ever seen (and I read comic books), it was also completely and totally unnecessary. Jack Ryan: Shadow Recruit is actually a complete reboot of the franchise, starting from scratch, since apparently that's what Chris Pine does. This is slightly odd, because the last film in the series, The Sum of All Fears, was also intended to be a reboot, so apparently we're just re-rebooting anything that doesn't make a certain amount of money. None of this explains why all of the advertising for this film touts Kenneth Branagh as nothing but THE DIRECTOR OF THOR, but that fact does amuse me greatly.

REALITY: In all honesty, I can't really understand why anyone with a career like Branagh would want to be heralded as the director of Thor, which was a pretty bland and poorly-directed film. (Superhero movies ruin lives, kids!) But more importantly, Thor basically reaffirmed the sneaking suspicion everyone already had, that outside of his dramatist comfort zone, director-Branagh is actually very mediocre. Jack Ryan: Into Darkness is marginally better, but still proves that The Director of Thor is still a very fitting moniker; a Scarlet Mjolnir upon Branagh's breast. 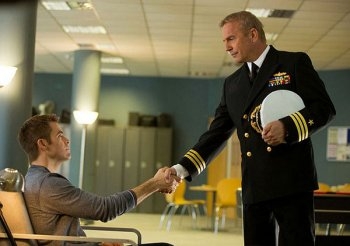 Jack Ryan: An Unexpected Journey opens us with a series of choppy, uneven shots in a sequence taking place on 9/11, as if showing us the exact moment Tom Clancy just snapped entirely. Super-smart finance doctorate student Jack Ryan (Chris Pine) joins the Marines and is nearly killed in a helicopter crash. As he recovers he falls in love with his physical trainer Cathy Muller (Keira Knightley) and is approached to join the CIA as an analyst by operative Thomas Harper (Kevin Costner, in the middle of the career resurgence that no one asked for, but no one really is opposed to, either). Several years later, Jack uncovers a secret terrorist plot by the Russians to drive America into the next Great Depression, using secret accounts and sell-offs to crash the value of the American dollar, or something? The plot doesn't actually make a lot of sense, but it does serve two purposes: First, it reminds us that this is in fact, a character invented by a paranoid right-wing conspiracy theorist. Secondly, it gives Chris Pine plenty of opportunities to do that thing he does in all his movies where he stares concernedly at a point just below the camera for about eight seconds before delivering the big reveal that his character just concluded in his head.

The problem is that none of this political intrigue is particularly intriguing, and only barely political. All of this is set up by a UN vote to approve a Turkish pipeline, weakening Russia's oil monopoly, but you essentially forget that plot point the instant it is brought up. Branagh doesn't do himself any favors by casting himself as the villain, Viktor Cherevin. Instead he comes across as cloying and desperate, in a feeble attempt to look cool. There are hints and suggestions of a troubled backstory and of a righteous rage, but nothing that manifests itself well enough to make me take this character or this situation seriously as a threat. Perhaps it's because the Cold War is over, -- at least in the minds of everyone but Tom Clancy fans -- but a better movie would be able to convince me there is a serious potential issue here despite its lack of real-world implications. 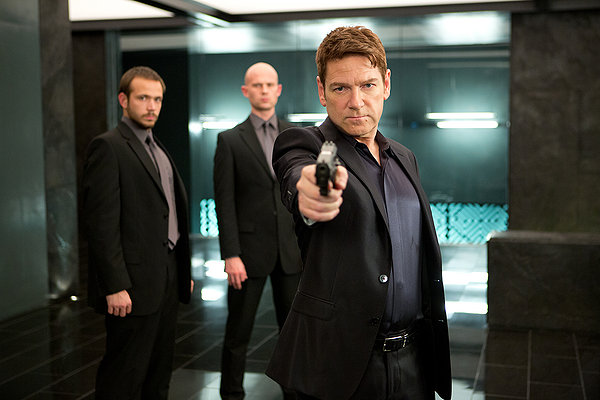 
Despite all of this, I do appreciate a great deal of what Jack Ryan: Shadows of the Empire is attempting. One of the best moments in the film comes after Jack kills a man for the first time in his life, and he is visibly shaken and admittedly out of his element. It's refreshing to see a reluctant, unsure action hero as a counterpoint to the arrogance and cocksuredness of say, Jack Reacher, or Pine's Captain Kirk. Pine does a fine job of portraying this, the problem is that it doesn't go anywhere. Similarly, the film does more to explore Cathy and Jack's relationship than most action films would, but it's all done just to set up an uninteresting chase sequence wherein Jack of course must rescue his kidnapped girlfriend.

There are bright spots, however. Besides the aforementioned chase scene, there are several action sequences that are decently shot and well-paced. The highlight of the film comes about midway, as Cathy serves as a distraction while Jack sneaks into Cherevin's office. Knightley, Pine, and actor-Branagh play very well off of each other, while director-Branagh actually puts together a decent action scene that doesn't involve men with swords! Congratulations all around! A great deal of the latter half of the movie is like this, and that elevates the film from "waste of concepts" into "barely-passable action film."

Jack Ryan: How I Learned to Stop Worrying and Run This Joke Into The Ground admittedly has some legs, but ultimately proves forgettable due to a lack of urgency and relevance. Like most people outside of Tea Party rallies, I see America as the biggest threat to the economic sanctity of America, and Godless-Commie Russia as more of a threat to, say, the lives of gay Russians. And no amount of Kenneth Branagh hamming it up will change that.

MINORITY REPORT: It's not like they were going to market their new action thriller franchise reboot as being from the director of Hamlet or Frankenstein, were they? Thor was both successful and recent, which is also why he got the job directing this thing in the first place. I think a more pertinent query would be "why relaunch the Jack Ryan franchise at all?" or even "who cares about Jack Ryan enough as a character to justify the chance that this will be mistaken for an unasked-for Jack Reacher sequel?" - Ian "Professor Clumsy" Maddison

Joke all you want, but I'm legitimately excited for the sequel, A Good Day to Jack Ryan. - Joseph "Jay Dub" Wade