REALITY: Last year, the documentary The House I Live In made a convincing argument that meth is the new crack, a drug demonized in the media and mythologized in a vast array of somewhat apocryphal horror stories. It's hard to argue with that. In the years since meth became the bogeyman du jour, writers and actors have used the wildcard behavior of addicts as a framework for monstrous, volatile villains. This is the drug that gave us Tuco Salamanca and Pooh-Bear, men who make the mustache-twirlers of the past seem downright cuddly.

It's an effective tactic. Hollywood has a long, rich history of playing off of our cultural assumptions to elicit some intended response, usually at the expense of some marginalized group or another. You or I may not be tweakers, but odds are we're only one or two degrees removed from a tweaker. And if not ... well, there's always YouTube. 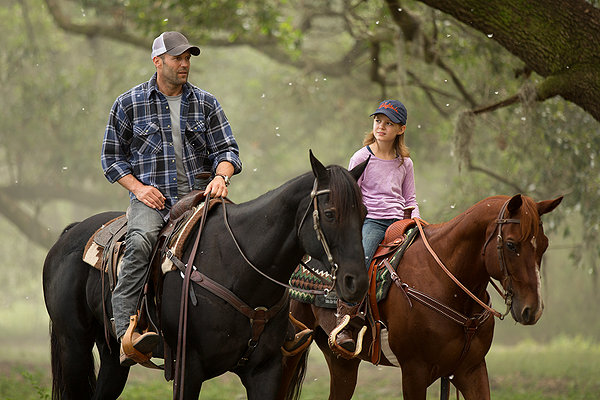 See? He is American. He's on a horse.


That may be a heady way to approach Homefront, a thriller that -- on the surface anyway -- seeks to do nothing more than jolt filmgoers out of the post-Thanksgiving warm and fuzzies. Sure, there's some father-daughter feel-good shit to challenge Jason Statham's range and Sylvester Stallone's screenwriting abilities (sample dialogue: "sometimes I miss Mom so much my stomach hurts"), but this is a film built around tough talk and brutal violence. On a deeper, probably unintentional level, Homefront is quietly subversive in its depiction of meth culture, even if it trafficks in other easy assumptions about the South and cliches endemic to this kind of thriller. But, y'know ... baby steps.

After an undercover operation gone horribly wrong, inexplicably British and porn-named DEA agent Phil Broker (Statham) sheds his ridiculous stringy-biker-hair wig, packs up precocious daughter Maddy (Izabela Vidovic) in hs brand-new pick-'em-up truck and relocates his little army of two to the South, where she can be closer to her mother's grave. I'll be damned if I can remember the city or state they find themselves in but no matter. All you need to know is this: Homefront is set in the South. After all, there's a gator in the title sequence. And weeping willows. Lots of weeping willows.

Anyway, there's another gator in this here film and that's Gator Bodine (James Franco), the local no-good, and there's his sister Cassie Klum (Kate Bosworth) -- she used to be a Bodine too before she married Jimmy Klum (Marcus Hester), that simpleton down at the recycling plant -- and I reckon you saw the sheriff (Clancy Brown) when you was pullin' into town. You get the point. I understand there's poetry in the Southern patois, but my family's from the South and I can confirm not everyone talks like they spent their teenage years huffing gold spraypaint and lightnin' bug turds from rolled-up Confederate flags. 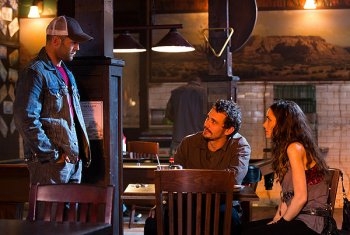 Hey, guys. You think I'm an American, right?What was I saying? Oh, right: Well, before you could say catfish, Maddy's fighting back against playground bully Teddy Klum (Austin Craig). She breaks his nose. Cassie and Jimmy, fine examples of Christian living, head down to the school to yell at the principal a whole bunch about her kid's broken nose and who's gonna pay the medical bills? One thing leads to another. Perhaps unwisely, Jimmy picks a fight with Jason Statham -- I mean, Phil -- in the school parking lot. Jimmy pays the price for his insolence. Maddy's teacher warns Phil that he's in danger of starting a blood feud. Phil apologizes to Jimmy, who considers the matter settled. Unbeknownst to both of them, Cassie has already asked Gator to wage a campaign of terror like only a small-town meth kingpin knows how.

Many of the best thrillers begin with a misunderstanding that spirals out of the characters' control as they grapple with ever-escalating circumstances using only their limited knowledge of what's happening when they're not on screen. Stallone, working from a Chuck Logan novel I haven't read (among the many Chuck Logan novels I haven't read -- basically, all of them), understands at least that much. The plot is great -- and it occasionally helps us to forget that Homefront's screenplay is its chief weakness, aside from the farcical casting of its protagonist. Here's a screenplay that neither aspires to attain the thematic richness of, say, The Departed nor the raw minimalism of the films of Walter Hill. Brutal violence should be used as a period or exclamation point -- at the very least, an interrobang. Homefront uses it as ellipses, patching together CliffsNotes for a film that doesn't exist.

So what's left? Well, the acting. Homefront succeeds on the strength of a great and terrifying performance from Bosworth, raving and meth-skinny as she steals scenes from Statham and Franco, who plays Gator as a variation on Spring Breakers' Alien. He has the same drawl and queasy charm, but he's a little more mannered, a little more gentlemanly and a hell of a lot more conflicted this go-around. As Sheryl, Gator's girlfriend, Winona Ryder continues the comeback tour she began in Black Swan. The action is riveting. The cinematography, while predictably alternating between warm and cold hues depending on who's in front of the camera, is gorgeous.

Most importantly -- and it took me an embarrassingly long time to realize this -- Homefront reverses that trend of building memorable villains around meth psychosis. There are a lot of crystal-smoking minor baddies waiting in the wings of Homefront, but none of its three main villains (Cassie, Gator and Sheryl) is a bona fide addict. One is clean, another smokes meth after making the difficult decision to relapse and the third uses only until he (or she) gets a shot at redemption. But at no point is their behavior blamed on the drug.

MINORITY REPORT: There is literally nothing more American than Jason Statham in a hat. Movies taught me that. - Joseph "Jay Dub" Wade