EXPECTATIONS: The only things I really know about this film are that it stars Judi Dench and Steve Coogan and that it was co-written by Coogan and award-winning TV comedy writer Jeff Pope. Does that mean it's going to be funny? Quite possibly. Does it mean it will be good cinema? Probably not, but let's see what happens.

REALITY: I am painfully aware that my approach to film criticism veers on the far outskirts of popularity. Few agree with my opinions and many consider my work to be ironic or deliberately contrarian. However, I think while a lot of critics will look at a film and simply say "this is a good story" or "this covers an important issue," I am often left looking at those same works and wondering just what it is about their particular stories that made it so important that they be movies as opposed to the kind of dreary feature-length TV specials that entice telly addicts with endless advertising campaigns and finally provide ninety minutes of not terrible entertainment. 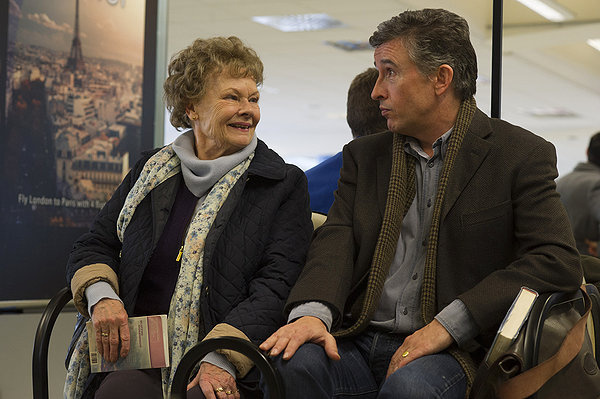 Knowing me, Martin Sixsmith... No, too easy.


Cinema is an artform with a very specific set of strengths and weaknesses that can truly transcend the perfunctory nature of pointing cameras at actors as they say things and then editing into a coherent series of conversations. Philomena is a perfect example of a film that would be much more comfortable in a television setting, telling its inspirational, impossible-to-leave-untold story to millions of exhausted parents as they slink their children off to bed and fall asleep to the sound of Steve Coogan's exasperated gurgling.

That's not to say that Philomena is a bad film, not by a long shot. It stands tall almost entirely on the power and strength of its (ostensibly true) central story. Disgraced Labour MP Martin Sixsmith (Coogan) finds himself out of a job after an email was misconstrued. Deciding that the best thing for him is to return to journalism, where he made his name before politics lured him in, he happens upon a fascinating human interest story as the eponymous Philomena Lee (Dench) breaks her fifty-year silence and decides to find the son that was taken from her by the Catholic Church as she was forced to work away her youth in Roscrea Abbey. Discovering that the boy was sold to a wealthy American couple, the mismatched pair travel to Washington D.C. to find the man that he has become.

What makes this first half of the film interesting is the dynamic between Martin and Philomena. He is an Oxford educated former BBC correspondent and Member of Parliament who feels wronged by his forced resignation from Government and she is a poor, elderly Irish Catholic with a tremendous sense of guilt in spite of having done no wrong in her entire life. It is an interesting dynamic, full of comedic potential. They're a pair of "unlikely companions" as this film's tagline wants us to know, you could even say they are something of an odd couple. She's working class and generous to a fault; he's used to eating in expensive restaurants on his luxurious expense account. She prostrates herself before God and begs for forgiveness, even where none is needed; he is a militant atheist who will argue the toss over anything. All at once, Philomena is an examination of how political figures, even left-leaning ones, tend to be very distantly removed from the people they should be representing and the much more standard buddy-comedy fare.

It is surprisingly subtle how Philomena will wring humour out of this situation. There are very few particularly big laughs in here, a surprise considering the writing pedigree, but it instead goes for the minor titters. Your shoulders will convulse gently in certain scenes and your lips will curl up at the edges. Perhaps you'll make a small sound, like a breathy "heh" or a mumbled "hmm" in amusement, based on whether or not your mouth happens to be open at the time.

It's heartwarming to a fault, but is so enamoured with recounting its tale that it takes refreshingly little time out for cloying sentimentality. These characters are allowed to stand on their own strengths and that is helped by some extremely good performances from Dench and Coogan. Dench wears her Irish accent loosely, but gets away with it by virtue of being Judi Dench, who makes acting, especially skilled comedic acting, look easy. Coogan delivers his trademark earnestness to humanise Sixsmith in a time where we're used to seeing our political figures made to look foolish thanks to shows like The Thick of It and actual Parliamentary footage doing that on a weekly basis. While Dench may play the title character, it is very much Coogan's film and therein lies one of its major failings.

After a short time in America, Sixsmith manages to track down Philomena's son. Turns out he grew up to be Michael Hess, a gay Republican who was an adviser to Ronald Reagan and died of AIDS at the age of 43. He was kind of a remarkable figure in himself and so it's a shame that this film does so little to establish Philomena's response to what her son became beyond a few mildly amusing comments ("oh, I knew he was a gay homosexual"). The real story here is Sixsmith's. His efforts to discover the truth are what drive the narrative forward and it's his reaction to the nuns' cruelty that we relate to. This is really a misstep. This would have been better served as a film about a mother finding her son rather than a politician reconnecting with the common people (and rekindling a successful writing career in the process).

Of course, the real issue here is that we have yet another example of a television film dragged into cinemas so that its stars can get some attention during awards season. We've seen it from director Stephen Frears before, The Queen being the ultimate example. I can't imagine living in a world where Steve Coogan is being put forward for Academy Award consideration, but now that I obviously do, I can't help but wish that it was for a much better film.