EXPECTATIONS: I was late getting into the Seth Rogen camp, and it seems like everyone was leaving as I got there, like I missed the party. Still, I'll stick with him. Now he's doing a road trip movie with Barbra Streisand playing his Jewish stereotype mother? Sold! I have a feeling this is going to be an interesting comedy about dealing with those stereotypes and confronting where they come from. Either that or it's just another road movie with nothing new to offer other than a clever title.

REALITY: So, here's the thing about The Guilt Trip: It's okay. Perfectly adequate. There's nothing exciting going on here, cinematically speaking. It's an actors' film, really, which isn't necessarily a bad thing. It's nice enough, sentimental and lighthearted. It's fine, you know? But, that's it. All that stuff I was hoping for about confronting stereotypes? Thankfully, it does get itself in there, a bit. 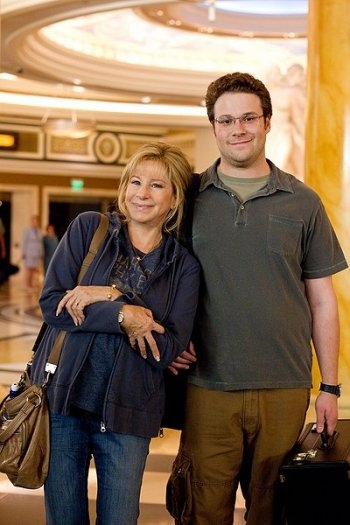 Aww, that's sweet.It all starts when scientist Andy Brewster (Rogen) starts taking his revolutionary organic cleaning product on the road to pitch to various retailers. The weekend before he leaves for his cross-country tour, his mother, Joyce (Streisand), tells him a story about a man she fell in love with before she married the long-dead Mr. Brewster. Andy decides to track this man down and convinces Joyce to join him for his trip. And so they hit the road. Joyce and Andy, Barbra and Seth, in a car, in hotels, in strip clubs. Mild hilarity ensues.

And it is funny. Funny in a way that you'd be comfortable watching this with your mother; even the strip club scene I mentioned above is desperately tasteful. Jokes about penises and such are designed to embarrass young men who have decided to treat their moms to a trip to the cinema, but without ever edging into offensive territory. It's refreshing, in a way, to have a comedy on this scale these days that isn't just trying to be as edgy and off-putting as possible. Consider the trailer for Identity Thief, which sells the film as having at least two scenes in which Jason Bateman is punched in the throat by Melissa McCarthy, and then compare that to this film, where the edgiest scene is one in which Seth Rogen turns down a lap dance, saying "Maybe some other time, when my mom isn't here."

So the script is good, for what it sets out to do, but I wonder if it would work half as well with two different actors in the lead roles. Rogen and Streisand are good individually, but there's such a perfect synergy between them when they're on screen together. Between Streisand's scenery-chewing and Rogen's muted sincerity, their chemistry is very compelling. As Rocky Balboa might say, they each "fill gaps" in the screen presence of the other. It's very believable that these two are a real mother and son, and they certainly make for a great double act.

If there's a stereotype that goes beyond the typical Jewish mother, it is the Jewish man embarrassed by his stereotypical Jewish mother. Recently, in Britain, there was a whole TV documentary series dedicated to the subject, with famous British Jews complaining about their mothers, and a recent sitcom by Simon Amstell called Grandma's House focused on Amstell's embarrassment by the Jewish matriarchs in his family. The Guilt Trip's greatest strength is how it handles this concept.

Yes, these characters are both essentially stereotypes, and stereotypes that feed each other in an eternal loop at that, but they eventually become aware of that fact. In one scene, Streisand finally loses her patience with Rogen's mumbled criticisms and yells at him, declaring she's not just a "thing to be tolerated." And of course, she's right. What she's saying is that yes, she may well act like a stereotypical Jewish mother, but she can't help it, she is still a person. 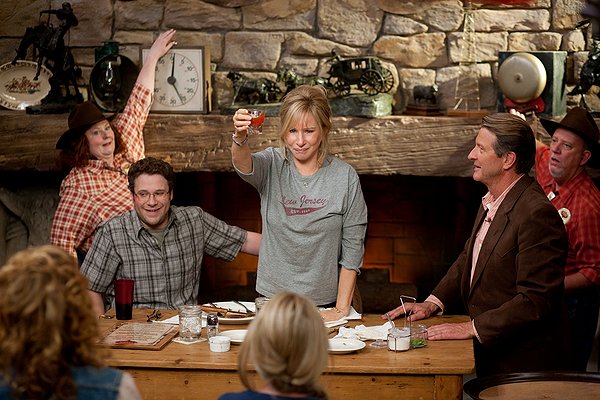 The new host of Man vs. Food is already off to a great start.


The thing is, they never identify this stereotype as being a Jewish one, that Jewish people reluctantly identify with. And while I do think that's somewhat detrimental to the film, the truth is that this isn't an inherently Jewish hangup. Aren't we all embarrassed by our overbearing mothers? Aren't our mothers all a bit annoyed by that embarrassment? Joyce and Andy feel like real people when they have this argument, and they genuinely grow because of it. The rest of the film portrays their relationship with so much positivity, it really energises the film.

It's a shame, then, that director Anne Fletcher approaches this material with absolutely no flair. For someone who branched out from dance and fight choreography, you'd expect a kind of rhythmic beauty to this stuff. Her comedic timing is good, but there's no aesthetic inspiration here. There's really only one moment of genuinely good cinema, and that comes with the ending, when we realise that watching these two characters walk away from each other in an airport lobby full of people interacting with their parents and children is heartbreaking. I really want to see Fletcher go on to do some more interesting things, because there's potential here and intriguing themes. I just wish there were more cinema going on here. This is a good script, well performed, but... show me something!

Would I recommend The Guilt Trip? I don't know. I think what you get out of it depends on what you take into it. If you're interested in these themes and you want to see these actors, you'll enjoy it. If you're hoping for something more modern or impressively cinematic, don't bother. If you're in between like me, you're interested in the themes but also want to see some good cinema, you'll be left feeling exactly as I did. That is to say, The Guilt Trip is okay. It's fine. It's perfectly adequate.

MINORITY REPORT: Apparently Seth Rogen and Barbra Streisand argue so goddamn much, it takes them three months to fly from the U.S. to the U.K. Oh, but how I wish they'd rented a car instead. - Sean "Keanu Grieves" Hanson