EXPECTATIONS: Fantastic, the new action thriller from David Fincher. This I gotta s... What's that? It's not David Fincher? What do you mean 'original' Dragon Tattoo? ...Well, then why don't they just use the guy's name so I don't assume this is a Fincher movie? ...But that's misleading! How dare they? They know I can't read the fine print during movie trailers! Have you seen how quickly they cut those things nowadays? It's a wonder I even caught the damn title. Fine, I don't even want to enjoy this movie anymore...

REALITY: Dead Man Down is proof positive that the right cast and a decent director can elevate a garbage script into something mostly watchable. Niels Arden Oplev, of Swedish Dragon Tattoo fame, does his best to direct J.H. Wyman's screenplay, but for the most part, Dead Man Down comes out looking like an action thriller with an almost tragic case of self-loathing. It knows how terrible it is, and it absolutely hates itself for it.

Victor (Colin Farrell) is a Hungarian immigrant in the employ of a crime boss named Alphonse (Terrence Howard). One evening he meets a neighbor of his, Beatrice (Noomi Rapace), who reveals that she knows all about his job as a killer. She offers him an ultimatum: Help her kill the man who mangled her face in a drunk-driving incident, or she'll hand Victor over to the police. Victor agrees, and as he plans to exact Beatrice's revenge, she discovers he's also plotting his own revenge against his boss. 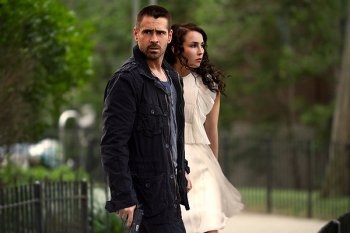 When Farrell plays anyone who isn't Irish you know it's bad.As straightforward as this plot might appear, the way it's all written seems intentionally designed to make viewers feel like idiots. After an hour of buildup concerning a mystery man sending Alphonse cryptic messages and methodically murdering his henchmen, we learn that it's been Victor all along. The scene in which we learn this plays out as though we should have known it from the start. We watch Victor set up his sniper rifle on the roof of a building, ostensibly to kill Beatrice's target, but a snap decision (or simply poor editing) causes him to switch his focus to Alphonse, who happens to be down the street having lunch with Armand Assante.

It really cannot be stressed just how jarring this switcheroo is. In screenwriting terms, this is meant to be the point of no return, the point at which our hero has fully committed to the circumstances of his story. This, however, is the first we're learning about Victor's desire for revenge. To bring it back to David Fincher for a moment, think back to the film Se7en. John Doe leaves clues for Mills and Somerset for an hour before he reveals himself to be Kevin Spacey, and it's crystal clear that he's the guy they're after. This is almost exactly Victor's situation, except at no point before this did the film ever entertain the notion that maybe he was the guy out to kill Alphonse. Sure, the difference is that John Doe is clearly the villain of Se7en, but if we're meant to invest in Victor's character, isn't the revenge angle one we should know about early on?

Maybe they did this because they had three different plots that simply refused to be reconciled. Or perhaps it's because they knew we'd see the trailers eventually, and the big mystery would be blown anyway. Regardless, we spend a solid hour getting into Victor's head, and at the same time we watch him with Alphonse's crew as they try to unravel the mystery of their stalker. The film only lets us to put two and two together after it's decided that a murder mystery just isn't exciting anymore. 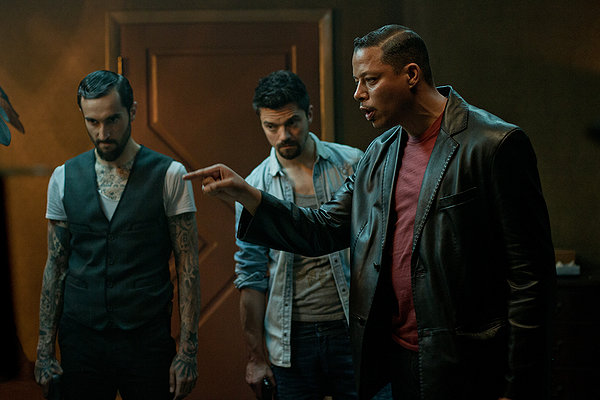 Watch out for that guy behind you, Terence. He's a vampire, also there's two of him. At least, so the movies have led me to believe.


From there, the film completely breaks down into tired revenge thriller cliches, and Victor suddenly turns from the emotionally distant hitman we thought we knew into something resembling a Hungarian Punisher. He has complicated bomb gadgets, a secret lair inside a derelict cruise ship, and a grandfatherly mentor played by F. Murray Abraham. All of these things threaten to derail the story we're already watching, and they very nearly do. By this point, there's absolutely no question as to how the film will wrap up: It's only a matter of time before Victor explodes his truck through the front door of Alphonse's mansion in a dazzling display of action and violence that makes us forget all about the themes it's been building for the past 90 minutes.

The less we know about Victor's character, the more likeable he seems. Colin Farrell is able to play emotionally damaged almost too well, but by film's end Victor becomes little more than an angry beard with a machine gun, and his arc seems more or less ruined. The real standout here is Noomi Rapace, seemingly the only member of the cast allowed to inhabit a fully-formed character. Beatrice is fragile, but she's also somewhat of a dangerous figure. She's completely willing to let a man die, though she might not yet fully understand what that entails. It's a shame the film wastes so much time on Victor, because Beatrice's arc is by far the most interesting thing going on in this film.

By the end, Dead Man Down loses all sense of tact and subtlety. Long gone is the intriguing examination of how revenge ruins lives, and in its place is a goofy melange of action elements in search of a purpose. Oplev's direction is uniformly impressive, painting a portrait of New York City that's alienating and oppressive yet every bit as unique as the one seen recently in Broken City. There are a dozen elements working in Dead Man Down's favor, and it takes every last one of them to overcome such a lazily thrown-together script. It's entertaining, but just barely.

MINORITY REPORT: It doesn't matter if this film isn't very good, or if next week's The Call isn't either. They both fascinate me because they're both actual, legitimate movies with theatrical releases from WWE Studios. This is a studio dedicated to making films to further the acting careers of professional wrestlers who are not Dwayne Johnson, and they're working with Oscar winners. The whole concept is so bizarre that I'm going to buy tickets just to see how weird this studio gets. - Martin R. "Vargo" Schneider