EXPECTATIONS: That Jason Reitman's latest film wasn't released last fall during awards season (or, y'know, on Labor Day weekend) really seems like a sign of no confidence on the part of Paramount. It's a shame, because his last two films have both been exceptionally good. I want Labor Day to continue the successes of Up in the Air and Young Adult, but showing up in the middle of the winter dumping ground is bad news. Like, in the "son, we need to talk about Rover" avenue of bad news.

REALITY: There's no sense in burying the lede on this one, so I'll get right to it: Labor Day is one of the most bafflingly terrible mainstream films of the decade. What begins as an average film about a shattered family quickly disintegrates into a schizophrenic romance teetering between treacly melodrama and home-invasion thriller. This film redefines what it means to be tone deaf, as longing gazes and fatherly pats on the back are underscored by frightening orchestral cues meant to instill us with a sense of dread. The fact that so much of Labor Day feels like a straight-faced horror film suggests that even Reitman had no idea where to go with this one.

On Labor Day weekend, 1987, twelve-year-old Henry (Gattlin Griffith) and his divorced mother Adele (Kate Winslet) are out grocery shopping when an escaped prisoner named Frank (Josh Brolin) forces them to bring him home and hide him from the police. Frank means them no harm, and over the weekend he provides Henry the sort of father figure he never got with his real dad (Clark Gregg), while teaching Adele to open up and learn to love again. There's also a serious case of Stockholm Syndrome at play here, but let's ignore that for now... 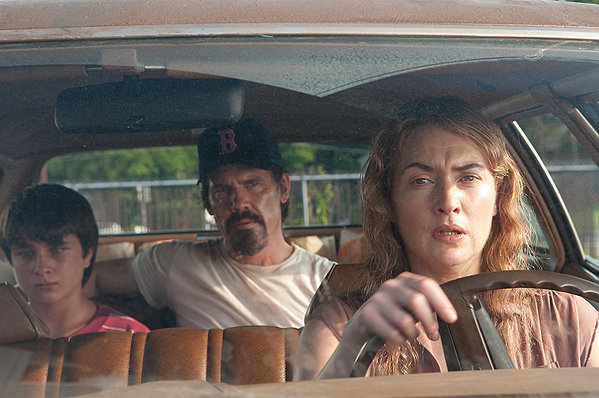 Actually, let's address it. Labor Day traps us into loving its main characters, precisely the way Frank ties Adele to a chair and forces her to let him be the man around the house until she loves him. It does this by showing us just how wonderful Frank is at basically everything. Baking, carpentry, auto repair, baseball, growing facial hair, stoic manhood, etc. To contrast this, every other adult in town is shown to be completely loathsome. Henry's dad goads him into playing football, because he doesn't want people thinking Henry might be gay. Meanwhile, Adele's neighbor abruptly leaves her mentally handicapped son with them for the day, and returns long enough to slap her own son across the face for causing a scene. (The latter scene warrants a full investigation, but life is short and this review ain't over yet.)

That's the rough sketch of Labor Day's story, but the margins are filled with a half dozen side-stories and flashbacks that only serve to complicate an already muddy narrative. We see glimpses of Frank's life before prison, as well as Adele's married life, but both are so needlessly vague that they raise a whole host of unintended questions. After a scene in which Henry and Frank bond over baseball, the film cuts to a flashback of Frank holding a baby. Are we meant to think Frank is this boy's real father? These questions pile up as the film draws Frank and Adele's stories as parallel lines, but constantly plays coy with whether or not they've ever intersected before now.

Is Frank Henry's real father? Did Frank once live in the house Adele and Henry now call home? Was his meeting them in the store that day more than a mere coincidence? Who's to say? As it turns out, none of these questions have anything to do with the story at hand. So if you find yourself wondering any of these things during the film, realize that you're playing a fool's game. 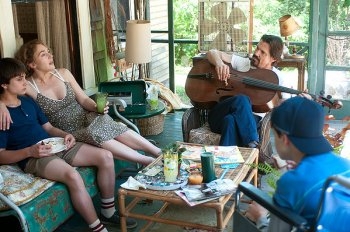 That's not a guitar, Josh.

Labor Day is a labyrinth of mixed messages, cobbling together ideas about romance and fatherhood that simply don't gel with what is still nominally a film about a family harboring a fugitive. It's like a surgeon cut open Clint Eastwood's A Perfect World, took out its vital organs, replaced them with pieces of Joyce Maynard's novel and filled in the gaps with whatever footage Terrence Malick wasn't using that week. The result is a maddening piece of melodrama that consistently finds new ways to confound its viewers.

This film is already a smoldering disaster of tones, but we haven't even scratched the surface of Labor Day's sexual politics. Almost from the first scene, we see that Henry has a raging Oedipal complex. Through narration (by Tobey Maguire), Henry explains that after his father left, he tried his best to play the role of husband. From the grocery shopping to the cooking, he does everything for his mother; everything except... you know... that! Don't make me say it. Once Frank enters the picture, Henry starts to obsess over other girls. Just when we think they've gotten the creepy shit out of their system, though, the film cuts to a flashback of Adele explaining to her son how good it feels to make love to a man.

I just...I can't...This is too much. For the love of God, Labor Day, enough is enough. You went too far, and then you kept going. You've done everything in your power to turn me off of this horrific romance. There is nothing left for you to do but end already. Just bring in Police Officer James Van Der Beek and let's wrap this thing up.

But then. But Then. BUT THEN! The film makes a Hail Mary pass to try and salvage itself with a big, Jeff Winger-esque speech. Years later, Clark Gregg and a now-teenage Henry have a heart-to-heart talk, in which Gregg explains why he left Henry's mother. He says, "She was in love with love, and I couldn't bear it." At this moment, the film cuts to Adele sitting alone in her house, reading a romance novel and giving a longing sigh. Ignoring everything that has transpired thus far, the film's entire situation boils down to the fact that Adele loved the idea of romance so much that Clark Gregg thought it was weird.

I feel like this scene is really about Jason Reitman laying his cards on the table and admitting that he failed at directing this movie. He wanted to create a tragic romance in the classic Hollywood tradition, and discovered that he was utterly ill-equipped for that type of storytelling. In fact, it's almost admirable. Instead of trying to backpedal and make excuses for the sluggish nightmare of emotions it just put us through, Labor Day ends by throwing up its metaphorical hands and declaring, "Yep, I'm just as confused as you are!"

MINORITY REPORT: I've been in a similar situation myself. In fact, you could say that Stockholm syndrome is how I met my first wife. The first of many wives. I'm always on the lookout for the future late Mrs. Smythe. - Montague "Legally Sane" Smythe