EXPECTATIONS: Somewhat mixed, I'm afraid. This is a film from Richard Curtis, creator of warm and fun films like Love, Actually and Four Weddings and a Funeral, both of which I adore, so there's cause for excitement. On the other hand, everything I've seen of this film looks like& well, how do I say this eloquently?... Complete garbage. The basic premise is something out of a high-schooler's abandoned NaNoWriMo attempt, and Rachel McAdams in particular seems like she's just resigned herself to a life of being the uninteresting love interest to a quirky leading man. You know what? Rachel McAdams has been the romantic partner of a time traveller three times now, and if she doesn't get to do a little time-jumping herself in this one, it's just completely unfair.

REALITY: It must be incredibly tiring being Richard Curtis' girlfriend. I'm sure that the grand sweeping gestures like running through airports and elaborate dinners on rooftops are sweet and endearing at first. But it must reach a point, a few years into your relationship, when you come downstairs and there's Richard standing before you in a velvet suit while Parisian chefs make you crépes and caviar and a string quartet plays a warm rendition of "Isn't She Lovely", he then tells you it's all for you, because you are the reason the world exists. At this point you put your hand to your head to cover up the throbbing vein and say "Goddammit, Richard, all I wanted was a bowl of cereal." 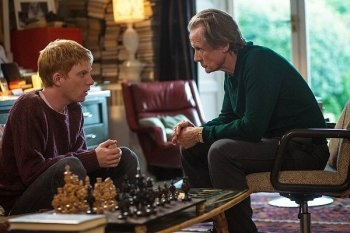 Son, it's about time I told... OH, DID YOU SEE WHAT I DID THERE!?With About Time, Curtis apparently decided that incredible wealth and a lack of good taste isn't enough when telling someone you love them, there must also be superpowers involved. Domhnall Gleeson plays a lanky, awkward shut-in named Tim (I assume his last name to be Traveller) who is told by his father (Bill Nighy) that he comes from a family of time travellers. This ability is presented without reason or fanfare, and as such seems completely arbitrary, as do its rules. Tim can only travel back to events within his own lifetime, and can't go any further in the future than the moment he left. Tim of course, immediately decides the best way to use this power is to find a girlfriend. When Tim finally leaves his parents' house to be a successful London lawyer, he meets Mary (Rachel McAdams), and proceeds to use his time-travel abilities to correct every mistake he makes with her and steal her away from another man, until eventually he makes her fall in love with him. This is exactly as weird as it sounds and the only people who don't seem to understand this are the people making the movie.

See, for being the master of all the romantic movies Don Jon rails against, Richard Curtis doesn't seem to understand the first thing about love or romance at all. He sets unrealistic and now physically impossible standards for romantic gestures, without convincing us that these people deserve or even like each other and therein lies the film's biggest issue. There's no real getting around this: Richard Curtis made a movie about a Time Rapist. Tim uses his time travel to undo every mistake he makes while courting Mary, to the point where he is essentially misrepresenting himself all the time, and she is being systematically brainwashed into believing he is a perfect human being that she later marries and has children with. He even goes so far as to stalk her through time, to make sure she meets him and not another guy she's dating at some point in the film. Remember, kids: Love is making someone be with you no matter what.

You might believe, as I did, that this film is going to pull a (500) Days of Summer or a Ruby Sparks and explore how dark and creepy this all actually is, but it never does. In fact it goes out of its way to justify it. Tim initially tries his time-travel pranks on Charlotte (Margot Robbie), a friend of his sister's, and when that fails, he decides "Well, turns out all the time travel can't make someone love you." So therefore when he does it to Mary, it has to be true love, right? For some reason it never crosses his mind that maybe the reason it doesn't work with Charlotte is that he comes into her room confessing his undying love after a few weeks. His inability to make mistakes has left him without the slightest hint of self-awareness, and therefore he is unable to realize that he is a Richard Curtis character. 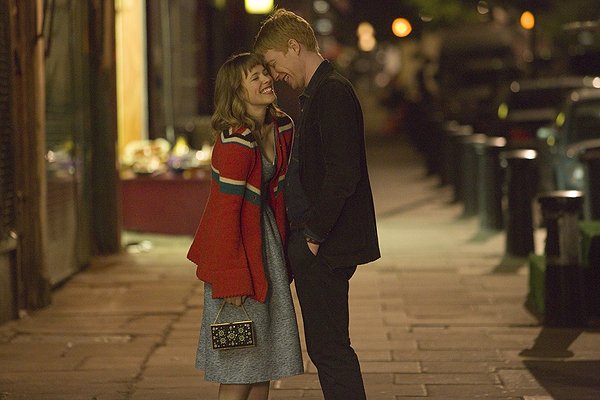 Stop it, it's weird.


This is what I mean when I say that Curtis doesn't actually understand relationships. All of his characters are Romantic Extremists. There is no middle ground with them, there's no such thing as "like" or even "like like", there is only "casual disregard" and "burning hot passionate end-of-time love." (There is an exception for "open disdain that eventually falls by the wayside for True Love.") In one particularly exasperating moment, Tim meets Charlotte again and is given the opportunity to finally sleep with her. He decides not to take it, then immediately goes to propose to Mary as though he's just had a revelation. In Richard Curtis' world, there is nothing in-between "Person I don't want to cheat on" and "Person I want to spend the rest of my life with." Even though at some point a man with time travel powers could probably have made sure "Oh by the way I have a girlfriend now" got into the conversation somewhere.

Beyond any of that, the other issue with the time travel gimmick is that it allows Curtis to create a film where literally no conflict happens. None. Anytime something goes wrong, Tim fixes it, even when it means directly making decisions for other people that he has no right to make. At one point he even forces his sister to go back in time and un-meet the man she falls in love with because he doesn't approve of how their relationship turns out. (Oh, yeah, apparently that's a thing he can do, too, is send other people back.) Tim never realizes that he shouldn't do this, and the only reason he stops is because another completely arbitrary rule pops up in the last half-hour, saying if you have a child, you can't time-travel back before the birth, because of reasons.

At no point in time are we shown that Tim is a decent person or is deserving of these gifts that he has been given, nor does he do anything to make me happy that he has them. He is a spoiled brat whose family apparently has a private beach, and this unlikable schlub is apparently also blessed with the ability of mulligans, and he does nothing with it. This means that the only real reason for the childbirth rule is that Tim eventually has to choose between having another child and abusing his powers to visit his dead father. The film introducing this concept is actually flat-out insulting, because it ignores the fact that Tim already has more time with his father than literally anyone else on the planet. It's a bit hard to cry for a man whose whole story arc is him deciding one day to be a normal person.

The reason Love, Actually is a good movie is that despite the presence of Romantic Extremism, it also does the opposite in parts, exploring different parts of love, including unsuccessful or strained ones. Here, the True Love bits are sanctimonious justifications for the fact that the main character is really using his powers to get laid. With About Time, you'd be forgiven for assuming that Richard Curtis' idea of relationships is so far from reality, it's actually terrifying. As anyone who has ever dated me can verify, the facade of perfection is very hard to keep up after just a few days, and it is at that point that you begin to actually really know and understand the person you are with, and decide for yourself whether you want to be with them. Mary is not only denied that decision, she is also denied the joy of loving a person despite their faults, because she is deceived into believing that there are none. Richard Curtis seems to think that if you love someone, they must automatically become flawless, when the truth is that flaws, and the ability to look past them, are key in relationships. When you are setting a standard for relationships that literally requires the breaking of the space-time continuum to achieve, I think you need to step back and think about what you're telling your audience there, Richard.

With that in mind, Mister Curtis, allow me to borrow from one of your better films:

And for now, let me just say

Without hope and with plenty of agenda,

Just because it's a movie review

And in movie reviews, you tell the truth,

To me, this is rubbish.

And my wounded heart will hate you

MINORITY REPORT: Maybe I'm just dense, but I don't understand the point of sending someone else back in time. Unless you're going to send Wolverine back in time to fight robots or whatever, wouldn't that person just come back the same as they were before? Or do you have to give them a task first? "I'm sending you back in time so you can learn an important lesson about not eating so goddamn much." Yeah, I guess that makes sense. - Joseph "Jay Dub" Wade