EXPECTATIONS: Oh man, here we go again. The trailers for Free Birds promise a perfect storm of utter madness. "Time traveling turkeys embark on a mission to stop the first Thanksgiving." In one fell swoop, that premise suggests this will be a film overstuffed with time travel malarky, revisionist history gobbledy-gook, animal rights mumbo-jumbo, and a whole host of other delicious-sounding synonyms for nonsense. My only hope is that they go full-tilt crazy and include a rousing rendition of the Lynyrd Skynyrd song performed by a band of gobbling turkeys. Hey, if you're going to be ridiculous, there's no point in half-assing things.

REALITY: As I sat there in that theater full of children, letting Free Birds wash over my eyes like a slow-motion tidal wave, something occurred to me. This film was not about to deal with any of the serious issues that I had expected it to. It sets them up, sure, but like a toddler going bowling for the first time, it's too happy to be watching things roll around to worry about whether or not it actually knocks anything down. In other words, Free Birds completely and utterly fails to execute its own premise. 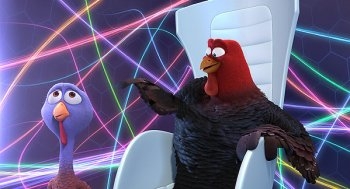 I have no idea what this is. Am I ill? I feel ill.Every year, the president chooses one turkey to officially pardon before Thanksgiving. This year, that turkey happens to be Reggie (Owen Wilson), a 'smart' turkey cast out of his community of farmer-worshipping idiot turkeys. Reggie is taken to Camp David, where he discovers the dual pleasures of delivery pizza and Spanish soap operas. Soon, he's kidnapped by a genetically-modified giant turkey named Jake (Woody Harrelson). Jake takes Reggie to an underground base where the military is experimenting with time travel.

Jake's plan: Steal the time machine (named S.T.E.V.E. and voiced by George Takei) and travel to 1621 to keep turkeys from becoming the Thanksgiving food of choice. They arrive to find the Plymouth colony on the verge of starvation, and the resident wild turkeys forced underground to hide from Myles Standish (Colm Meaney) and his gang of hunters. When Reggie meets the turkey chief's daughter Jenny (Amy Poehler), he realizes the only way to save the turkeys is to use his brains to outsmart the humans.

That second part might have been the easiest plot summary I've ever written, mostly because somewhere in the middle of it all, I realized I was just rewriting the plot of Avatar. The protagonist uses a science thing to integrate himself into the native society, and must become one of them to save them from the human interlopers. It's pretty straightforward, and we could go around in circles for days about how far we can take the whole "going native" plot, but that's pretty much the only card Free Birds has up its sleeve.

I have a game that I like to play with animated films like this. It's called "What If They Were People?" How would all of this look if the film were simply a live-action version of the same story? Open Season may become every fish-out-of-water comedy you've ever seen, and Ice Age 2 may simply turn into The Day After Tomorrow. Rio, however, becomes a film about people being forced to mate in captivity. Bee Movie goes from a film about a bee suing humanity for stealing honey to something so ridiculous my robot brain can't even compute it. 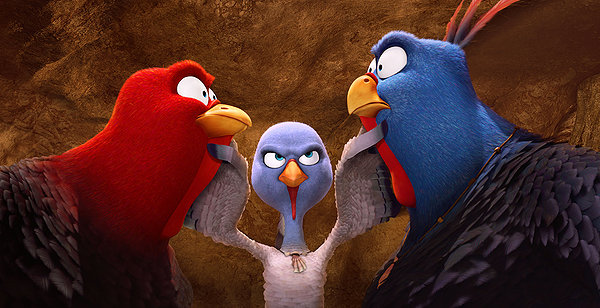 Look at the emotion on these brilliantly designed characters' faces. Such craft!


With that in mind, Free Birds becomes even more transparently racist than it already is. When Reggie and Jake arrive in 1621, they discover a turkey society in the early stages of being hunted down and exterminated by the settlers. They wear face paint, treat seashells and sticks as sacred objects, and many speak in broken English, if not outright gibberish. In short, the turkeys are Native Americans, and Myles Standish is out to kill them all.

But just to prove that the whole film isn't all racial caricatures and stereotypes, the Wampanoag natives show up for Thanksgiving dinner and are portrayed as regular, loincloth-wearing Joes. They're no different than the Plymouth colonists, save for appearance and their knowledge of cultural touchstones such as Angry Birds. There is a world of difference between the film's image of the natives and it's image of the native turkeys.

And, honestly? This confuses me. If the depiction of the actual natives is fairly respectful, does that cancel out the fact that the turkeys are awful native stereotypes? Maybe so, because once they show up for the Thanksgiving feast, the film seems to remember why it's doing all of this in the first place. Reggie and Jake aren't trying to stop the natives and the settlers from coming together, they just don't want to be eaten. Once that revelation dawns on them, the film wraps itself up in two minutes with an easy fix sponsored by Chuck E Cheese's.

Around the periphery, Free Birds is filled with little details, none of which serve any purpose other than to help things seem less rote. There's a montage of Reggie living it up at Camp David accompanied by a soundalike of the Sublime song "Date Rape." There's a crazy turkey whose only line in the film is a reference to RoboCop. One of the squatty little pilgrim kids looks just like Glenn Danzig. And the president is a Ronald Reagan caricature that sounds just like Bill Clinton. Why are any of these things here? Bored animators? Lazy punch-up writers?

As it turns out, the film's release date was pushed forward an entire year. That time could have been spent fine-tuning a script without any jokes, or finding anything for Jenny and the other turkeys to do. Or, and this might sound crazy, even attempting to say something to kids about American history. I know, not all children are as interested in learning as I am. That's okay, but if not at the movies, then where? School? Pffft, whatever.

MINORITY REPORT: Why is it always Owen Wilson? Every animal in the world will one day open its mouth, beak or whatever it has and out will come the voice of Owen Wilson. All at once, Owen Wilson's voice will ring out from billions of creatures, the din of smug aloofness will cloud the world and deafen all who hear it. You have been warned. - Ian "Professor Clumsy" Maddison