40 Mistakes I Made Last Year

2005 was a challenging year for me as I angled and aligned myself to fit around and through various obstacles, avoiding any form of productive citizenship in the process. I say to myself: bravo! You did it! Glorious achievements aside, I still encountered my fair share of mishaps. I want to get some of those mistakes off my chest lest they linger with me into 2006, the year to end all years.

1. Built a Cornish pasty so big that my neighbors couldn't get out of their driveways.

3. Attempted to use Gold Bond in place of baking soda and had to have my stomach pumped.

4. Found five dollars in change in my stomach, promptly spent it on Arby's "5 for 5" deal.

5. Caught a raccoon with my bare hands, but then realized I had no reason to do such a thing and spent the entire afternoon panicking, afraid to let it go for fear it would attack me.

6. Tossed said raccoon into my bathroom and slammed the door shut. I had to pee in mason jars for a whole week until the raccoon expired.

7. Told a hobo that he could sleep on my couch on the grounds that he ghostwrote at least two of my frontpage updates a month.

8. Forgot to get rid of expired raccoon, causing the hobo to abandon my humble dwelling for less smelly pastures.

9. Ate nothing but cheesecake for a whole month, temporarily gained the ability to hear five minutes into the past with my left ear.

10. Got depressed when Terri Schiavo didn't respond to my fan mail.

11. Bought two copies of "City Slickers II: The Legend of Curly's Gold" thinking I would wear at least one of them out. I wore out both.

12. Collected enough signatures to get Puerto Rico declared a state, but used them to get the Patriot Act signed permanently into law instead.

13. Bought a dozen parakeets thinking they would grow big enough to eat. Ran them all down the garbage disposal a week later when they failed to demonstrate sizeable weight gain.

14. Drove my Tex-Mex cooking instructor to do something she swore she would never do: take a human life.

17. Abandoned a brilliant career as a chaos mathematician to spend more time building forts in the sandbox.

18. Abandoned a brilliant career as a sandbox fort maker when children threw hardened chunks of sand at me.

19. Attempted to build a fort using loaves of bread as bricks at the grocery store. Now I'm no longer welcome in the bread aisle without supervision from a manager. 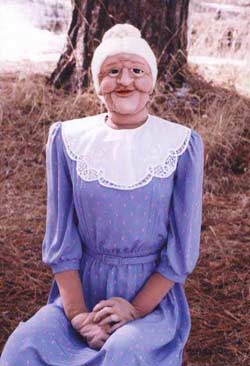 20. Had the east wing of my SUV expanded to make room for an additional spire, complete with a spiral staircase.

21. Mastered falconry in order to become a superior hat thief, become cocky and attempted to steal the hat of the town sheriff. Now my precious falcon is sealed in a police evidence bag.

22. Posted an airtight justification for rape on the Internet, only to find my character and humanity attacked by stupid PC liberals.

23. Nearly died after attempting to watch every episode of Law & Order in one sitting. I was on life support for two months. But whatever doesn't kill us makes me stronger, so I will try again this year.

24. Had my postage stamps taken away by authorities when I swore I would never stop writing letters to Angela Lansbury, my one true love.

25. Built a life-size statue of Idi Amin out of pasta in the front passenger seat of my car to cheat my way into carpool lanes. Was nearly assassinated twice.

26. Started a mod for Half-Life 2 based on aerial dogfights except with flying carpets instead of planes. Could not get carpet physics to work and smashed my monitor with a large can of beef ravioli out of frustration.

27. Traded all my shares in Google for a really nice bandana, spent half a day pretending to be an outlaw.

28. Started a petting zoo consisting solely of Mexican jumping beans. Failed to chain beans up to prevent them from hopping away in the night.

29. Wrote the first really great American novel, which concerns the affairs of a small town that is torn asunder when an alien rapes and eats Santa Claus. I accidentally stole the story from an early draft of Harper Lee's To Kill a Mockingbird and had to abandon it altogether.

30. Got fired from my job at a museum for stealing mummy wallets.

31. Sold advertising space on my lower back to GoldenPalace.com.

32. Got emotionally involved with a coworker, something I swore I would never do. We just couldn't stop talking about large breeds of dogs together.

33. Took an RV for a test-drive and liked it so much that I decided to go on an impromptu cross-country trip. Ending up getting arrested for vehicle theft somewhere near Mt. Rushmore. Naturally I decided not to buy the RV.

34. Invented a method to solve the world's food distribution problems but forgot to write it down. I think it involved conveyer belts and the world's longest rubber band.

35. Disguised myself as a chess piece and then robbed a jewelry store. Was caught when I couldn't run diagonally from authorities.

36. Spent $5,000 building and staffing my own sweatshop in Nicaragua, then having them make me one really large high top shoe to live in. It ended up collapsing and killing everyone in the factory before it was finished.

37. Opened a library in my bedroom, but failed to draw interest due to the fact I own less than 20 books, most of which tell you how to 3d model a horse and then how to animate a walk cycle.

39. Cursed at the Canadian border guard who refused to let me enter his country. I think he was just jealous that I drive an Abrams tank and he doesn't.