EXPECTATIONS: I have zero hope that Old Dogs wi 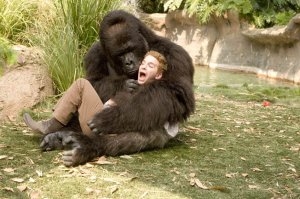 The first joke.ll provide anything resembling entertainment. The film advertises itself as being "from the director of Wild Hogs," which is Disney shorthand for "we refuse to take responsibility for this garbage." Robin Williams and John Travolta are two of Hollywood's most inexplicably popular actors, and the fact that the two are tag-teaming this one spells nothing but trouble. With appearances by Matt Dillon, Justin Long and Seth Green (or, as I like to call them, the Douchebag Squad), Old Dogs promises to be one of those cloying family flicks that ends up not appealing to anybody.


REALITY: One of the worst moviegoing experiences one can endure begins with walking into a movie that you know is going to be an utter abortion and walking out with your expectations thoroughly and unapologetically met. Old Dogs is the kind of movie that all but announces its own shittiness in the trailer. Fun fact: I actually focus-grouped the previews for this movie several months back. The studio apparently took none of my notes into consideration, because none of the advertising presents the slightest glimmer of hope that this film will do anything but bore anyone whose age is less than their IQ. 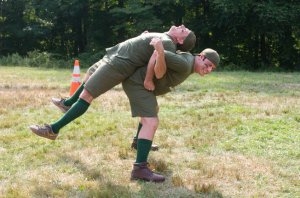 The second joke.The film opens with a thoroughly incomprehensible introduction to our two main characters. Dan (Robin Williams) is the lonely, uptight business partner and best friend to Charlie (John Travolta), who's an aging ladies' man in the sports-marketing business. When we first meet Dan and Charlie, they're in the middle of a meeting with a group of Japanese businessmen. Charlie relates to them the wacky adventure he and Dan had years ago in Miami, during which Dan got a giant tattoo across his chest that reads "Fremont." The businessmen, who speak not a word of English, love this story so much they begin pointing at Dan and jokingly chanting "FREMONT! FREMONT! FREMONT!" This scene is so strange that I thought for a moment the movie was actually going to be some kind of Dadaist deconstruction of the family comedy. Seriously, the opening scene is that off-putting.

However, my high hopes were immediately dashed, because the actual plot plays out like the unholy union of Two and a Half Men and Jingle All the Way. Dan is suddenly contacted by the woman he hooked up with in Miami seven years prior, who tells him that not only must she go to jail for two weeks, but that (surprise!!) their two kids need a place to stay for those two weeks. And because Dan lives in an adults-only gated community, the whole gang gets to stay at "Uncle" Charlie's place, a swanky bachelor pad where the only thing inappropriate for kids is Charlie's collection of ancient poison-tipped spears. The first act keeps piling on the ridiculous sitcom-y plot contrivances, and the story proper consists of Dan learning to be a dad, step by wacky step.

I have absolutely no idea who this movie's target

That's it for the jokes. Here's Kevin Nealon!audience is. There's a load of slapstick and poop jokes and people getting hurt and whatnot, the kind of jokes kids love so much, but I had to be the youngest person in that theater by at least thirty years. But, hey, those old people ate this movie up with a spoon, so who am I to judge the director of Wild Hogs? The other puzzling X-factor here is Seth Green, who plays Dan and Charlie's protege. His role in this film is essentially to take beatings at every turn, and then to presumably get raped by a gorilla. I say his role here is puzzling not because it's a thankless comedic role, but because he himself constantly dumps on this kind of movie with each week's episode of Robot Chicken. I never took Green that seriously in the first place, but if he's gonna keep starring in garbage like this, he really has no right taking potshots at everybody else.

I guess everyone -- Green, Travolta, Williams and the rest of the Douchebag Squad -- really does have a price.

Joseph "Jay Dub" Wade once gave a lecture on the social merits of John Carpenter's They Live. The university still won't return his calls.

MINORITY REPORT: God, the Bad Taste Squad is really out in full force this week. First, Macrame_God bashes the greatest ninja movie since Three Tigers in One vs. Dragonbreath Suzuki and now...Jay Dub has the audacity to criticize what is a tour de force for Williams and Travolta, as well as an enlightening treatise on the paternal role in the modern world, which, like it or not, has been reduced to babysitting when baby-mama pulls a two-week stint as Paris Hilton's bunkmate. Just as art reflects life, with both the divorce rate and the "bitch gon' to jail" rate on a record climb and the courthouses still favoring the mother in custody battles, Old Dogs shows a substantial amount of courage in portraying the reality for a silent majority of families. Watch Jerry Springer for proof; you think he makes this shit up? Anyway, this adherence to harsh realities is a pretty lofty achievement for a family film, which earns the rare David's Five-Star Seal of Approval as a movie that, despite its innumerable tit and shit jokes (all of which are hilarious and perfectly timed), has all the courage of Precious without all the sexual abuse. Plus, SETH GREEN!!! -David "Data Core Devil" del Vacoté III