EXPECTATIONS: Once upon a time, 50/50 bore the title I'm with Cancer. The studio, in its infinite wisdom, decided people wouldn't go see a movie with 'cancer' in the title, and opted to go with something a little more difficult to pronounce. Then, hopefully, somebody realized they would still have to advertise that their movie was about cancer, and that the name change effectively gained them nothing. Clunky title notwithstanding, I'm hoping 50/50 can manage the feat of balancing a cancer movie with Seth Rogen's abrasive sense of humor, much in the way that Funny People didn't.

REALITY: One of George Carlin's most memorable bits was about how anything can be funny if put in the right context. While he was talking more along the lines of jokes about rape and war and the like, 50/50 is proof that Carlin's notion certainly holds water. Here is a comedy about cancer that never gets too tasteless in its humor, but is also smart enough not to veer too far into maudlin territory. With a smart script and a handful of excellent performances, 50/50 feels more genuine and engaging than a cancer comedy has any right being. 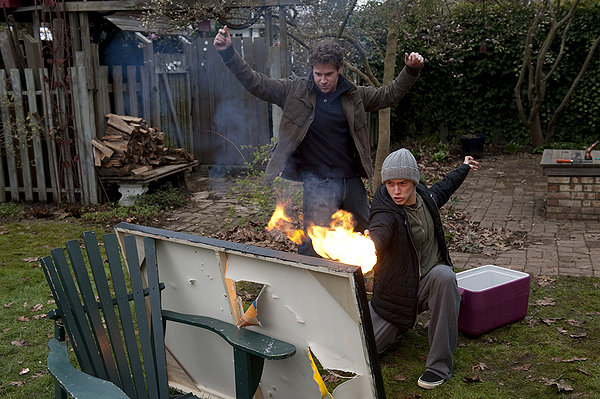 And that's how I became a member of the X-Men.

Adam (Joseph Gordon-Levitt) is a guy who, by all rights, should never get sick. He runs every morning; he doesn't drink; he doesn't smoke; he doesn't even drive a car, claiming it's one of the fastest ways to an early grave. After going to the doctor complaining of back pains, however, he gets the news that he has a rare but treatable type of spinal cancer. Adam begins treatments with his girlfriend (Bryce Dallas Howard) at his side, but soon finds himself forced to seek the support of his best friend Kyle (Seth Rogen), his mother (Anjelica Huston), and his therapist (Anna Kendrick), who's still very much in training.

As Adam's illness plays out, 50/50 strikes an interesting balance between the drama of Adam dealing with his disease and Kyle looking for ways to help him laugh about it. Kyle pops in and out periodically to crack a few jokes and check up on his friend, which allows Rogen to never overstay his welcome in the movie. As easy as it is to rag on Seth Rogen for essentially playing himself in every film, this is one instance in which it completely works. 50/50 is based on screenwriter Will Reiser's own battle with cancer and the way in which he and his friend Seth Rogen dealt with it. Much of the film's comedy comes from two friends simply trying to make light of a dire situation, and the film pushes their friendship just enough to get us to care where the relationship is going. 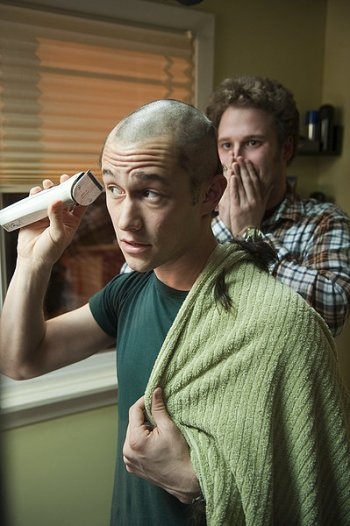 Aaaaargh! A hairless head! My greatest fear!I've always maintained that my favorite comedies are ones in which funny characters are forced to endure some outlandishly dramatic situations. This dynamic is the only reason The Simpsons Movie works at all, though my personal favorite example will always be Shaun of the Dead. While nothing about 50/50 is as out-there as zombies or giant domes, the concept remains largely the same. The film does an excellent job of establishing who these characters are and why we should care about them, and then proceeds to slowly turn the screws on them. The drama in this film winds up feeding the comedy, and the comedy in turn begins generating more drama. It's a smart dynamic that I wish more comedies would adopt.

Stepping into Reiser's role, Joseph Gordon-Levitt takes his character through the five stages of grief with a surprising amount of sincerity. There's no wink to the camera, no dramatically frail performing, and no hacking or sputtering like he might just have a cold. Aside from a shaved head and some pale makeup, his portrayal of Adam's cancer is entirely in his attitude. He sells it well, and I dare say it's one of the better dramatic turns of his career.

A film like this is all about characters, and 50/50 fills itself out with some great supporting players. Philip Baker Hall and Matt "Max Headroom" Frewer make humorous yet sobering appearances as Adam's fellow chemotherapy patients. They all but disappear from the last act of the film, but given the direction the story takes, their absence isn't an issue. Also on hand is Anna Kendrick, who offers a little warmth whenever the film threatens to get too cold and cynical. All of these characters, along with Rogen's Kyle, step in to deflate some of the drama whenever things get a little too depressing. It's actually kind of remarkable how efficient this film is at balancing between the two extremes.


50/50 is a film of modest goals. It isn't attempting to make some kind of grand statement about cancer or dying or life in general. There is certainly a lot to enjoy in this film, and if I have any complaints about it at all, it's that the film can be a bit manic at times. 50/50 is a short film, so it doesn't have time to burn on things like slow-building drama. However, it is very funny and exceedingly well-written. It's not often that we're allowed to laugh at a situation as dire as cancer, but 50/50 proves that while laughter may be the best medicine*, choosing when and how we laugh is sometimes more important.

MINORITY REPORT: I think they only named it 50/50 to subliminally convince us to give it that score. Glad to see good sense prevailed on that front. - Ian "Professor Clumsy" Maddison