Hey everyone, Vargo here. For the past two weeks, I've been covering the Philadelphia Film Festival, on behalf of Current Releases. During that time I saw roughly two billion films, praised the Philadelphia Film Society for selling alcohol at the theaters numerous times, and angered the creator of Back To The Future. My brief reviews will trickle in during future columns; this time, I'm addressing my favorite Festival films as well as the one I liked the least. But first, STORYTIME!

SO THIS IS A THING THAT HAPPENED.

At the film festival's exclusive screening of Flight, there was a Q & A session with Robert Zemeckis, director of groundbreaking and beloved films like Back To The Future, Forrest Gump, and Who Framed Roger Rabbit. And the producer of Mars Needs Moms. Regular CR readers will know which film I asked about.

Prior to the screening, Festival organizers told the audience that everything is fair game. A few people asked normal, ass-kissy questions, like "How did you come up with the script for BttF?" etc. I was the third or fourth person chosen, and I said, as respectfully as I could:

"Mr. Zemeckis, it's an honor to be speaking with you. I've seen Back to the Future and Forrest Gump more times than any other film." (Which is probably true.)

Then people started applauding. They applauded me.

"That being said, two years ago, I was assigned to review a film you produced called Mars Needs Moms. As you know, the film was not only a box-office failure, but also many critics and groups -- myself included -- found the film not just bad, but offensive. So, what I'm asking is, to reconcile that with the respect I have for you, what happened there? How much control did you have? Are you satisfied with the final product?"

He blinked a few times and said "Well, thank you for liking Back to the Future!"

Here's where it gets surreal.

He went on to defend the film, as expected. He said it was "incompetently marketed," "kicked down the stairs," "unfairly vilified for no reason" (I have a list of reasons, but okay) and "lost in the middle of a corporate restructuring." (Meaning Disney saw this movie and shut his studio the hell down.)

Then he called it the "best 3D film since Avatar."

You know what? I'll be honest. I didn't SEE Mars Needs Moms in 3D. Maybe it did have the best 3D since Avatar. But Avatar didn't blatantly say that women with jobs are shitty mothers, so advantage: James Cameron. Plus if I had seen it in 3D, the bigotry would have been that much more in my face.

I know that normally when we have run-ins with celebrities here at Something Awful, we do things like send them to Alaska or make them eat eggs for charity. I don't know, maybe I should challenge Robert Zemeckis to a haiku-writing contest or something. I don't think I need to. As a critic, I have to know that people whose work I admire may not like me.

I'll admit that part of me was hoping Zemeckis would throw someone else under the bus and say it wasn't his fault, but I was pretty sure that wouldn't happen. The sound bite also got coverage in The Huffington Post and Entertainment Weekly, but Jen Yamato's Movieline article I linked above is the best account. I asked a valid question, he gave a valid, if befuddling answer. It was a conversation between two professionals who disagreed over something. (Also, what is with that Entertainment Weekly article? "Well WE liked the movie, it's a good thing the dude who made it agrees!")

Besides, in answering that question, Bobby Z inadvertently answered a second question that I asked nearly two years ago. At the beginning of the original relatively famous article, I ask: "Mr. Zemeckis, have you gone INSANE?" Well. Now I know.

AND NOW FOR SOME OTHER FESTIVAL HIGHLIGHTS:

Sometimes you hear a concept that is so bizarre, you wonder why anyone even thought of it, yet simultaneously so perfect, you wonder why no one's thought of it before now. The premise behind Caesar Must Die is one of these ideas: It's William Shakespeare's Julius Caesar, but done in prison. Specifically, the film details a group of drug runners, murderers, and mafia members rehearsing for a performance. The film blurs the line between drama and documentary not only by following a script (Two, really, counting Shakespeare's) but also by using actual inmates in the entire film.

In fact, 90% of the film is actually the original text, and it's a linguistics nerd's wet dream to watch it translated from Old English to Italian, and then back into Modern English. We watch the prisoners in their constant rehearsals, because what the hell else are they gonna do? The result is a series of striking performances and an incredibly human film. Also, probably the most realistic stabbing scene that play has ever had. 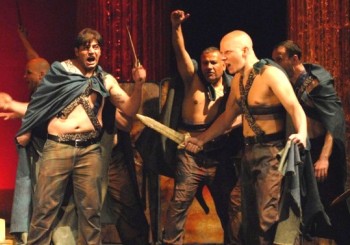 Hey, Caesar! Beware the stabbings of me!

Going into this film, everyone kept reminding me that this is Italy's submission to this year's best foreign film Oscar. I usually responded by suggesting it also be nominated for Best Performance by a Toothbrush Shiv, but as I watched the film, I realized that my preconceived notions of prison life (which admittedly all come from Oz) are part of the reason for the film's existence.

Here in America, we have this pervasive "Hang 'Em High" idea that once people go to prison, they cease being human, which makes us all feel better for laughing at unfunny prison rape jokes. This film makes it seem as though the performance is a yearly thing, and the one thing these men have in their lives to look forward to, which makes the rest of their sentence worse. Unfortunately, the film is a bit on the nose about this, literally ending by having someone make that point into the camera. It's a minor complaint, though, and Caesar Must Die is a fascinating film that doubles as a fantastic Shakespearean adaptation. It also taught me that what Italy calls "Prison Cells" we in America call "Freshman Dorms," and I'm not really sure what that says about either of our societies.

It kinda feels unfair for me to even recommend this film, because it may or may not ever see an American release, which is a damn shame. Shanghai is a wildly creative film that still pays homage to its influences in classic noir. Set in the title city during the days leading up to Pearl Harbor, Shanghai takes a look at one of the most popular time periods in film, but from a perspective that's rarely dealt with in American cinema. John Cusack plays a Naval Intelligence spy undercover as a Nazi sympathizer in Shanghai, investigating the murder of his best friend and former partner. (Played by Jeffery Dean Morgan, making this like the fourth time he's been dead or supposedly dead at the beginning of a story, and shows up only in flashbacks.)

Director Mikael Håfström is best known for making movies like 1408 and The Rite, which were at least visually interesting, but not actually very good. Shanghai is beautifully shot and creatively composed, and this might just be the first time he's been handed a decent script. However, the breakout performance comes from the always-good Ken Watanabe, playing the anti-hero Captain Tanaka. Watanabe has this "Stoic Charm" thing down, and he brings a sense of romanticism to the Captain Renault role he's handed. All of this is irrelevant, because you may never see the movie, so uh ... neener neener neener I guess.

Recently a friend of mine asked me what makes a good screenplay, and I came up with this answer: The thing about screenwriting, what sets it apart from any other kind of writing, is that it's basically a technical document that tells a story. It's an instruction manual, used by actors, cinematographers, and directors that says "Here's how to make the audience feel." And no one seems to grasp how mind-blowingly difficult that is, making a technical guide to human emotion, the least technical concept on the planet.

A Late Quartet is an example of a good screenplay, because almost every line contributes to character and theme development, but not overtly so. The titular string quartet (Phillip Seymour Hoffman, Catherine Keener, Christopher Walken, Mark Evanier) is entering its twenty-fifth year together when Walken's character is forced into early retirement by the early stages of Parkinson's. Given more space, I'd be able to pontificate, but a smart script and a surprisingly subdued performance from Walken make up for a fairly directionless plotline.

I wanted to like this film. I did. I support Helen Hunt's attempt to remind us every once in a while that she's an Oscar-winning actress. Well, maybe not support, but I don't oppose it. However, the second rule of Oscar Baiting, right behind "Never Go Full Retard," is "Don't tell everyone you're trying to win an Oscar." And that's what this is. In this film, based on a book/true story, a previously Oscar-nominated actress you thought would never get naked gets naked. When the Oscars come out, this could be the new Extremely Loud and Incredibly Close.

Hawkes plays poet Mark O'Brian, a man with polio, who decides he'd like to have sex once in his life, so he hires a sex surrogate therapist, which is evidently different from a prostitute in ways that the movie doesn't bother explaining. 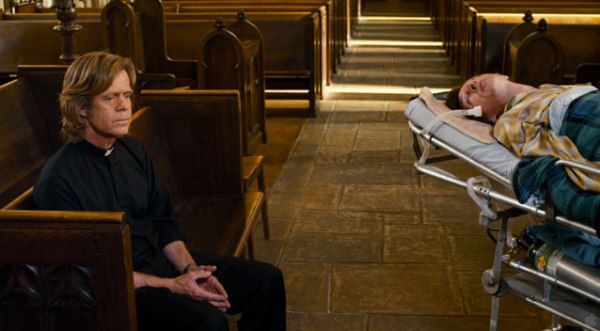 "The bible doesn't say anything about your particular condition. At least, I hope it doesn't..."

Look, a movie that represents disabled people as fully capable, functional adults is something we should have. Especially one that deals with themes of religion. But the problem with The Sessions is that it is so obsessed with making Mark a heroic character, it actually dehumanizes him. The film brings up good points, such as how Mark reconciles his religion with his illness, and then literally laughs them off with a joke. It's a biopic that doesn't do enough to make its subject truly flawed, or even remotely interesting.

Come back next week for Part Two of Vargo's coverage of the Philadelphia Film Festival!