Friday, May 27, 2005 by Dennis "Corin Tucker's Stalker" Farrell (@DennisFarrell)
"How long does this go on for?" asked Coraline. "The theater?" 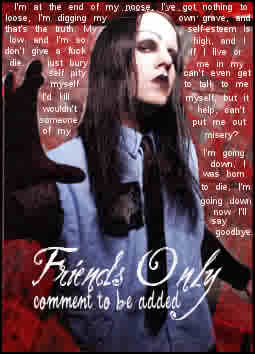 Compared to the last Inactive Fiction, this one is a bit less wacky in favor of spoofing some gameplay conventions found in MMORPGs. There's no random Batman killing or eating things you really shouldn't eat (which were some of my favorite parts of the last one), but stuff like that didn't really fit into the parody. Hopefully people will still dig it as much as the first for different reasons.

I was somewhat relieved to see Zack confess that the Awful Link of the Day can be a pain in the butt sometimes. I mostly keep to myself and am too shy to talk to the other guys unless I'm absolutely forced to (when I have a really stupid question, Arbor Day, etc.), so it comes as good news to hear that I'm not the only one who dreads having to find an ALoD at the last minute. Don't get me wrong, sometimes they can be really fun. On occasion I'll find a perfect candidate through my everyday web browsing or someone will send a great one in, but more often than not I find myself staring at the Google screen searching for "sex with trees" or "silly putty conspiracy". Be sure to mail us with any ALoD-worthy material you might find, it could save an unfortunate writer from a migraine.

I Am Now A Mac Fag

I've had an iBook for about a year now and absolutely love it. The only reason I kept a PC as my main system was to play Half-Life 2 when it came out, so when my computer went on the fritz a few weeks ago I decided to complete the switch and get a Mac Mini which just arrived at my house today. It's ridiculously small and sleek, and with the gig of memory I manually upgraded it to (those were ten of the scariest minutes of my life) the machine zips through everything I need to do.

There isn't much of a point to this, I'm just a sucker for pretty new hardware and I'm entirely too enamored with my new machine.