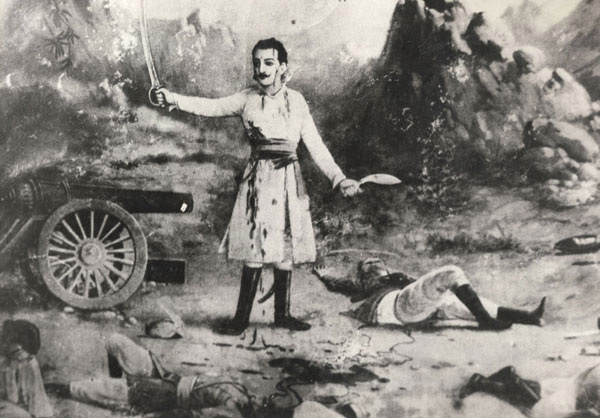 Steve: Walt is running to the window to check it out.

Zack: Gags is there and he looks pretty pissed off. He's covered in blood and coming straight for the barracks with a knife in each hand.

Steve: Walt is going to shoot him.

Zack: You blast him in the chest with the Tommy gun and he drops to the ground.

Steve: I told you we needed more than zero bullets! Go back and tell Betty that he just shot Gags. Probably should go back to the radio center.

Zack: Gruber agrees with your plan. "Do you have the other crystals?"

Zack: You have a whole case full of crystals. That you left sitting right in front of the hatch when you ran away from Gags earlier.

Steve: "Uhhhhhh, well..." Gonna tell him about the case of crystals.

Zack: He seems to take it in stride. "The pattern will be bleeding through even more than before. But one of us must recover the crystals. It is the only way to stop this."

Steve: Walt isn't going down there. And we need Betty to work the radio.

Zack: Gruber volunteers. "If you shut out the pattern you will not be harmed. I will go and retrieve the case, but you must tell me exactly where you placed it."

Steve: Doing that. Cut him loose, but Walt will keep his gun aimed at him at all times though.

Zack: He opens a locker in the barracks and gets one of those uniforms with the black helmets. "Let us go."

Steve: Heading back to the radio center.

Zack: When you go outside, there is a patch of blood on the ground, but no sign of Gags.

Steve: Ohhhh good. Let's move fast and lock the door behind us.

Zack: You get back inside the radio outpost and bar the door.

Steve: What I don't get is why Betty called herself on the radio.

Zack: Gruber marches over to the radio and starts turning dials.

Zack: "The pattern reveals the truth that all possible outcomes exist simultaneously. Time and decision are irrelevant if you can travel from outcome to outcome and time to time. This is not possible. Not for humans. Not yet. But we can communicate by way of Die weit Turm. Our far tower. You bounce the signal off this point and it is transmitted where we desire."

Steve: So it's like a phone call that can travel through Jet-Li's The One and through time?