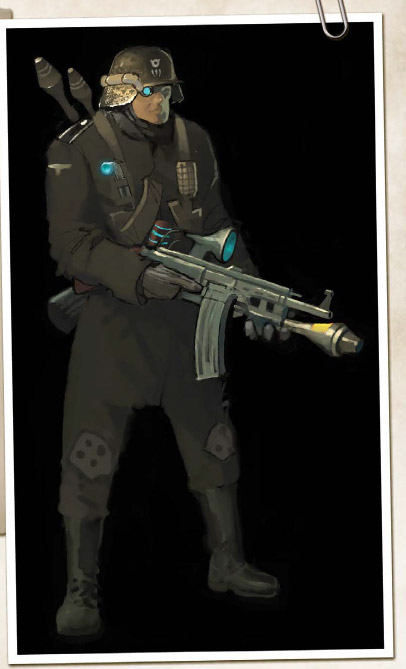 Zack: He shows you how to operate this form of transmission. "Transmit to them not to open the hatch. If they have not, find me and give me the crystals. I will deal with things in their timeline."

Steve: Why would we send this radio call out when it obviously got us killed before?

Zack: If what Gruber is saying is true then you being killed was only one possible outcome. Someone else might answer when you pick up the radio. And Betty can't even talk on the radio because she's deaf this time.

Steve: Good point. I guess. Betty is going to go down the stairs with Gruber to make sure he doesn't try anything and keep the gun pointed at him. Walt is going to send the radio transmission.

Zack: Splitting the party? Always a good idea in Cthulhu.

Zack: Down the stairs, you can see the reflections of the flashing colors on the walls. Gruber warns Betty not to follow him past the bottom of the stairs and if he has not returned in a few minutes, to seal the doors once again and keep trying to get word out on the radio.

Steve: She is going to keep the gun pointed at Gruber for as long as she can see him.

Zack: He seals his black helmet over his head and for a brief moment you can see the hypnotic patterns of light reflected in the glossy black. Even that is enough to make you lose a point of sanity.

Steve: Betty is going to keep careful time. The second five minutes is up she is going upstairs.

Zack: It takes him four and a half minutes. The colored lights finally shut off. He returns with his helmet tucked under one arm and a big grin on his face. "Very good. Almost all of ze crystals are here."

Zack: Now, back to the radio room.

Steve: "Breaker, breaker good buddy, this Rough Patch, coming to you from Cloud City. Got a miss piggy and a papa bear picking apples in the basement."

Zack: After a long silence you hear Betty's voice. "Who is this?"

Steve: "It's Walt! Betty, it's you. Have you opened the hatch yet?"

Zack: "The hatch? What? On the map. We just walked in here and you started talking out of the radio."

Steve: Yes! "Listen, don't go down there. It's very dangerous down there. You have to take those crystals and give them to a guy named Gruber. He'll know what to do with them. He's in the barracks."

Zack: "Yes, well, alright, but why must we do all this? Can you explain things a bit more? How are you talking to us when you are standing right here in the room with me?"

Zack: Before you can explain it to her, there is a powerful bang on the door. The wooden bar splinters, but holds.

Zack: Another bang and the door smashes open. Gags falls into the radio outpost. There is a huge bloody hole in his chest. Some sort of Nazi giant in full armor comes stomping into the radio room.

Steve: "Yeah, I give up!" Walt is throwing his gun down.

Zack: Several more of the Nazi troopers storm into the place and grab Walt.

Steve: Well I guess Walt is a POW. This is cool though because the Germans were well known for being hospitable to POWs.