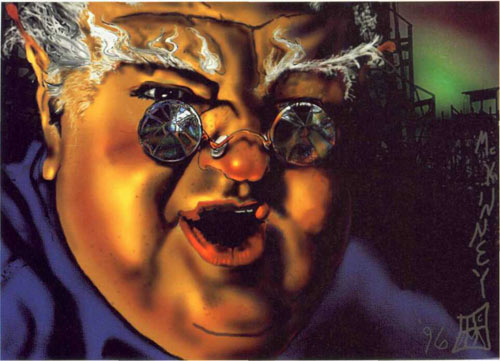 Zack: "No, my glasses!" Close up on cracked lenses. Camera pulls back to reveal entire library filled with take-out menus. He has all the time in the world to read them, but can't see to place his order.

Steve: I don't know about that, but he's pissed at whoever did that to his glasses. Possibly the Duke boys.

Zack: Well the Boss Hogg was a pig in a poke with all of them menus for Chinese and pizzas, but the fairy Duke boys had a different idea. They came tearing through astride their orange dream chocobos and ran straight for Boss Hogg like Cooter making a bee-line for Aunt Ida's short ribs. Before poor old Boss Hogg knew what hit him his glasses were all askew and the Duke boys were making for the realm line.

Steve: I would play any World of Darkness game themed around Dukes of Hazzard. You just name a time and a system.