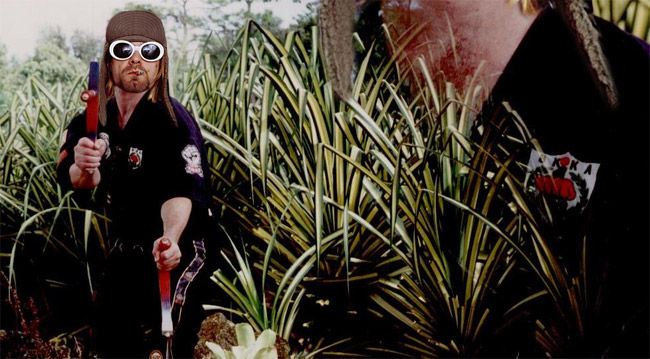 Steve: How badly injured is Kurt?

Zack: He can stop the blod loss and stabilize himself, but any heavy action and he's going to start losing blood.

Steve: Kurt is searching the Turtles and the dressing room.

Zack: You find multiple matchbooks from the same Chi-Chis restaurant downtown and a pamphlet supporting more nuclear power plants from a group called Americans for Energy Prosperity. You also find a satchel full of plastic explosives. It is blood stained.

Steve: Alright, grabbing the plastic explosives. We need to get out of here before the gack really hits the fan.

Zack: You slip out of the Kids' Choice Awards and share information with each other. Left Eye suggests that Remo brought the plastic explosives for her, but she doesn't know why. And why would the ghouls kill him?

Steve: I think it's time we get some margaritas and fried ice cream.

Zack: After Kurt goes to the hospital. He is at about half hit points.

Steve: Can't he just inject heroin to cover for the injuries?

Zack: Yeah, okay, but he needs to be careful. If you fly too close to the heroin sun your heroin wings are liable to get burned.

Zack: The Chi-Chis is located in one of those mall developments where it's not actually in the mall, but it shares the parking lot. It's actually closer to a strip mall of odd businesses.

Steve: Since Kurt is messed up I'm going to have Eazy-E go in.

Zack: Eazy-E goes in and immediately he notices that something isn't right about this Chi-Chis. It's unusually dark and gloomy and there is a sense of despair hanging over everything.

Zack: They look like they were extruded by an earthworm. The waiter has an unhealthy pallor and his gums are bleeding.

Steve: Yo, gangster, are you alright? Your mouth is bleeding.

Steve: Yeah, trust me, I know what that's like.

Zack: He seems genuinely uncomfortable about his bleeding gums.

Steve: Does Eazy-E have any mythos knowledge that could tell him anything about those symptoms?

Zack: Does he have a medicine or chemistry skill?