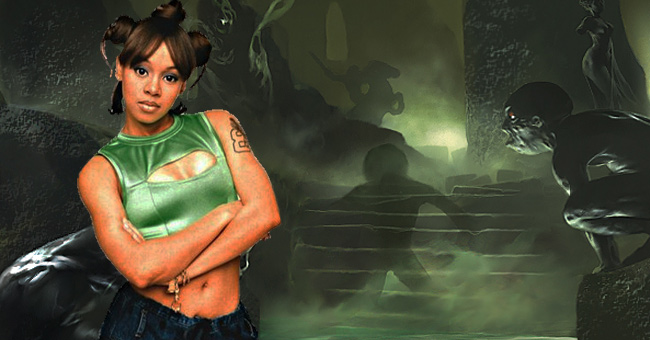 Zack: She loses four and Kurt and E each lose one sanity. What is your reggae command?

Zack: You want him to be your friend? That's bordering on wishing for more wishes, but I'll allow it. The vault door falls inward and flashlight beams illuminate the shifting flesh of the servitor. The first policeman through the door falls over screaming. The next two freeze and start shooting at the servitor. Their bullets do nothing to it.

Steve: Can I tell him not to kill anybody like Terminator 2?

Zack: The servitor barely even perceives humans as living things. Its tendrils lash the policemen aside, breaking bones and severing limbs. It heaves forward, crushing more of them beneath it, grabbing another and swallowing him whole as it pummels any who stand in its path. Shotguns and pistols blast at its body with no effect. It climbs the stairs to the ground floor and rampages out into the parking lot. Few in its path escape.

Zack: You run through the gore and bodies left by the servitor as it continues to overturn cars and dismember and smash the panicked police.

Steve: Pile into the car. We need to get out of here. E holds the back doors open. "C'mon me bredren! Get in Station man!"

Zack: You're bringing it with you?

Zack: IT is not your friend.

Steve: That was my command.

Zack: Alright. Allllright. Station the servitor finishes tearing a man's head off and slithers into the back of the van. The chassis can barely hold its weight. Some of its tendrils pop out of the teardrop window. Although it might have dealt with the cops on the ground, there is still a helicopter pursuing you.

Steve: Does Station have any spells?

Zack: Yes it does.

Zack: The servitor begins to pipe on its strange flute. After a few seconds a circular image appears in the sky in the path of the helicopter. It's as if a landscape of a strange place, a lake beneath two suns, has been painted into thin air. The helicopter flies directly into the image and does not emerge from the other side. Instead, you see the helicopter becoming more distant as it flies over the lake. Beneath it, illuminated by its search light, ripples begin to appear on the surface of the water. Then you lose sight of the image in the sky as Kurt turns the van up a dusty road.