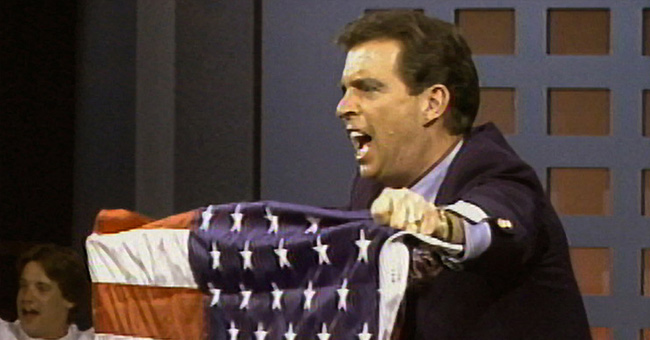 Zack: The PA shrugs and takes you to a dressing room labeled Janet Jackson.

Steve: Does it have a star on the door?

Steve: "Where is my star? I demanded a star on the door!"

Zack: A tendril raises up from inside the tarp and paints an elder sign on the door in black ichor. The PA faints dead away.

Steve: Drag him into the dressing room.

Zack: Station squeezes through the door. You noticed when you came in that Bill Clinton's dressing room is just down the hall. Morton Downey and Bush's are in the other direction.

Zack: He pipes on his flute in the affirmative.

Zack: When you get to the door you hear angry voices from inside. It sounds like Morton Downey Jr. is shouting about Saddam Hussein. "We'll use the human weapons to increase the radiation and hasten the rise. If this mad Arab seeks the fungi we will turn his cities into a radioactive wasteland."

Steve: Kicking in the door!

Zack: You burst into the dressing room. A pair of sexy bikini babes point Uzis at you. Morton Downey Jr. turns from the brass contraption he is using. On the mirror-like screen is a bizarre creature with a totally inhuman head on a long stalk.

Zack: "More assassins from the traditionalists? Give it up. You'll never stop me."