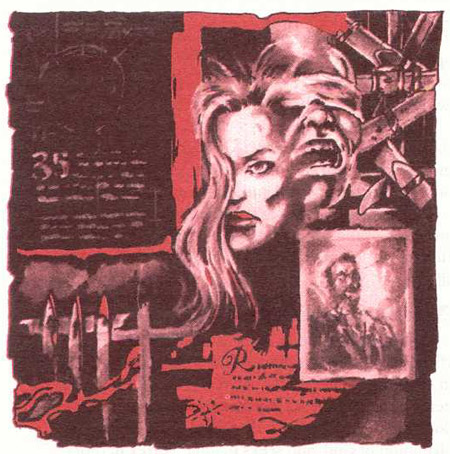 Steve: Knives, blindfolded screaming guy, weird occult text. I get it. But what's with the belts?

Zack: Evil belts. You can tell because they're at an angle. That suggests a sinister purpose.

Steve: What sinister purpose can a belt have?

Zack: Tying off the arm of a teddy bear to inject bugs.

Steve: Tying up a hooter maybe.

Zack: Now, hold on, I've learned from several fighting video games that a belt over a hooter is a perfectly acceptable costume.

Steve: Is this where we date ourselves really badly by talking about #gamergate?

Zack: I've probably already made ten references that will be dated. Also I'm not holding an opinion on #gamergate. Too dangerous. So, uh, everybody is wrong. The truth is in the middle. Etc.

Steve: It's time we talk about #evilbelt.